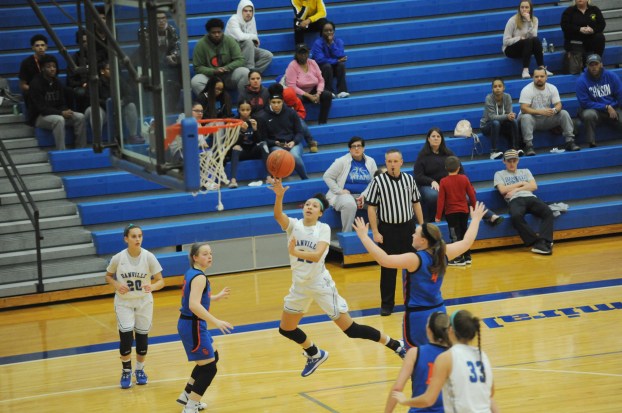 Desiree Tandy's last second shot at the end of the third quarter left her fingers just a tick after the buzzer sounded. (Photo Derek Brightwell)

Ask Danville coach Judie Mason what went wrong for the Ads in their 49-46 loss to Southwestern (12-1) and she’ll give you a simple answer.

“We make free throws and lay-ups and we beat one of the best teams in the region.”

That was the difference for Danville (8-4) Thursday night when they almost sent the Warriors home with their second loss of the season.

Still, the Admirals were in the game up until the end, thanks in large part to a stifling effort on defense and physical rebounding.

“I just wanted them to compete and I thought we competed. That’s the runner up from state last year and they only lost one player and we had — in my opinion — should’ve won the ballgame,” Mason said. “It’s hard to be disappointed. We added this game two days ago so we didn’t really get a chance to prepare. I just wanted to have good competition before we head into district play and the All-A and I thought we got that tonight.”

Coming into Thursday’s showdown, the Warriors only loss this year came to Casey County — a team that returned everyone from last year when Southwestern beat them in the regional championship — by six points. After Thursday, Junior Molden’s team has won 10 straight.

Danville finished the game with 33 rebounds, eight steals and three blocks. That effort is something that coach Mason will take every game, even if the result doesn’t go their way.

“I wanted to work on our halfcourt match-up defense. We lost them at times, but that’s going to happen on communication,” she said. “Our rebounding — that was one of the keys because they’re a lot older and stronger than we are. I thought we were going to have make contact to get the rebounds and I felt for the most part we did rebound with them. We played hard, rebounded the ball and played good defense. If they do those three things, I can’t be disappointed with them.”

Mason said that before district play — which begins with Tuesday’s match-up against Boyle County — and the All-A Classic — starting with a Jan. 14 game against Danville Christian at Burgin — she isn’t as concerned with wins and losses as she is with the effort that she sees from her team every game.

“I always break the season into parts. All these games we’re playing right now are to get ready for our district games,” she said. “These are all practice games and I feel like we’ve gotten better every game. We just have to finish.”

The first and fourth quarters were more or less even for the two teams — Southwestern took a 13-11 lead into the second, and both teams scored 15 in the final period. The second quarter was a big one for Danville. The Ads started the quarter on a 7-0 run over the first four minutes and ended up outscoring the Warriors 11-3 to go into the half up 22-16.

But the third quarter started with a Southwestern 6-0 run and ended with the Warriors up 34-31.

“They outscored us 18-9 in the third quarter. We come out in the second half up six, we missed a lay up and got an and-one,” Mason said about the swing. “We could’ve gone up eight, but instead it’s cut to (three). Those are the plays we’re going to have to make to win the All-A.”

But, Danville did hold Southwestern to its second lowest point total of the season — and the lowest in a win. Late in the third quarter, the Warriors got a pair of timely threes to pull away and changed the momentum of the game.

“I subbed in right then, and we had one person who rotated in didn’t get the assignment. I’ll take that one,” Mason said about the threes. “When our sub goes in, they have to know what they’re doing and we lost them two times in a row and that was big. For the most part, though, we held them. They scored 49 points. We should win that ballgame.”

It all came down to missed opportunities for Danville. Open chances not falling, missed free throws and off nights offensively from key contributors.

“Cam’s (Preston) averaging 12 points a game — she can’t have four points and us win. Jenna (Akers) can’t have three and us win,” Mason said. “No matter what happens. No matter what they do on the defensive end, rebounding. If they don’t score, we’re not going to win.”

Next on the agenda, Danville plays at Wayne County on Saturday with a 3:30 tip.

After that, it’s the first of two match-ups with crosstown rival Boyle County. The Ads play host and the girls will start off the double header at 6:00 p.m.

Make it seven in a row for Danville. After dropping a tough road game to West Jessamine early in December,... read more