Duke of Danville gets key to city 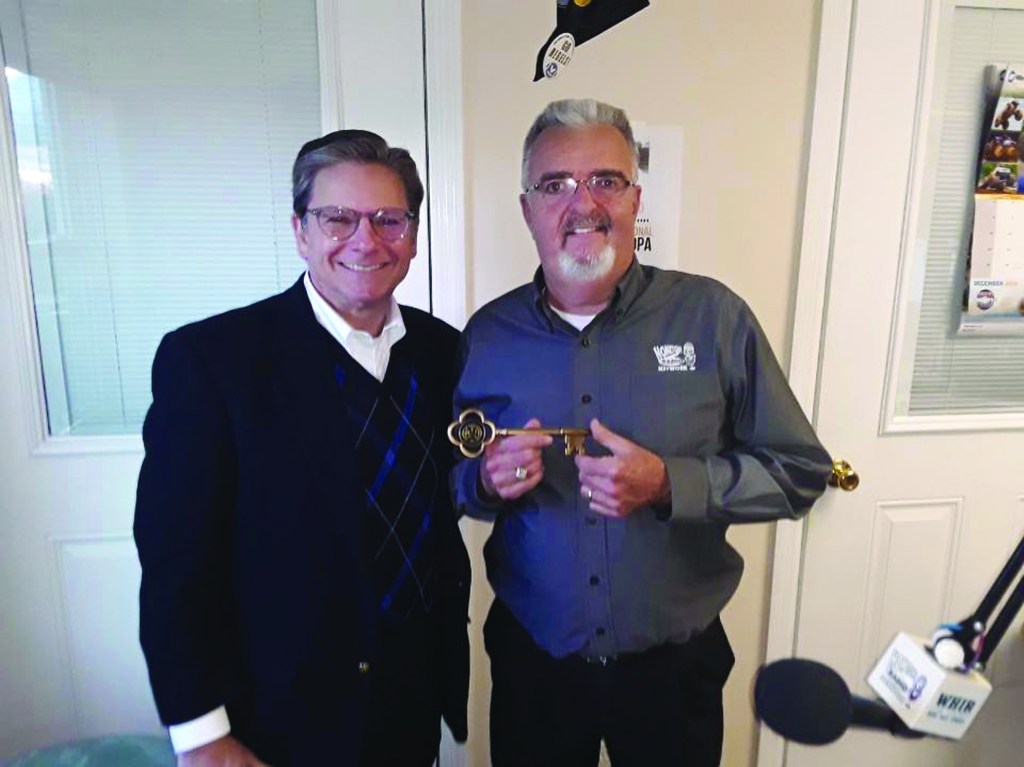 Longtime radio personality Charlie Perry got quite a surprise Monday while on one of his last days of work. Mayor Mike Perros showed up at Hometown Radio Network, where Perry retired from after working since 1988, and presented him with the key to the City of Danville.

“I wanted to do something kind of special for Charlie,” the mayor said Thursday. “I figure after all the years, he has become somewhat of a staple, particularly his community time during the ice storm of ‘09.” Perros said there’s no telling how much comfort Perry gave to people during those scary days, with power and phone outages in the area, by staying on the air full-time.

“He didn’t leave the airwaves during that, and kept a lot of people company, as well as served as a lifeline to put several in touch with emergency responders — his motto during that was ‘power to the people,’” Perros said.

During a previous interview with The Advocate-Messenger, Perry said he slept at the radio station during the storm.

Perros said it was important to give Perry the key to the city because “there’s just not going to be more institutional figures like Charlie.”

Perros read a proclamation on the air Monday, which detailed Perry’s “illustrious career” working in radio, and the impact he’s had on the community. He mentioned how thousands have visited with Perry on air over the years, where he promoted local businesses, charitable organizations and other worthy agencies and causes.

“He’s done work with the Danville Jaycees, March of Dimes, United Way …. Charlie’s voice has been the voice of the Boyle County Fair, Admiral football and Rebel games, the voice of the vote on election night …”

Perros said something he found out while researching information for the proclamation is that Perry was involved in the planning of the inaugural event which created the Great American Brass Band Festival, and was even part of those leading the first parade.

“He was named one of Kentucky’s Best Radio Personalities by Kentucky Monthly, as well as Best in the Business (by Advocate-Messenger readers).”

Perros said Perry is known for his humor and lightheartedness, amd will be missed greatly.

“He will forever be that unforgettable voice all school-aged children listen to for school closings,” Perros said.

“He came by the studio and surprised me,” Perry said. “I am very honored to receive this symbol of appreciation from my hometown.”