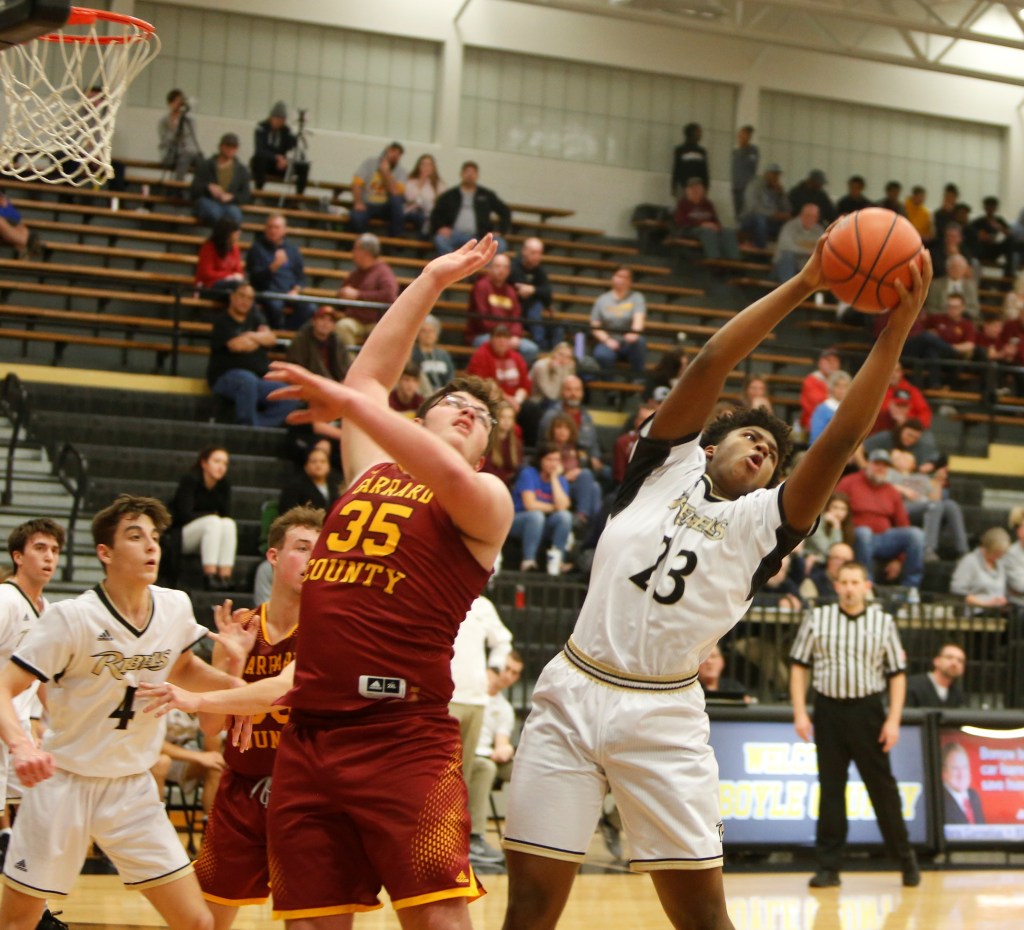 It’s January already, and the Boyle County boys are still trying to catch up on what they missed in December.

They made a smooth transition into the second phase of the season Friday night as they manhandled Garrard County 56-27 in their 45th District opener.

However, Boyle coach Dennie Webb said there is still much to do as the schedule becomes more routine and the games become more significant with the start of a new calendar year.

“I’ve still got things that I’m wanting to do that I thought maybe by this point we’d have in,” Webb said. “I don’t know when we’re going to get a chance, because it’s crazy now. It’s two days on and then play, and they’re all big games. We’re just going to keep grinding, keep getting better. … This is a good group.”

Defense paved the way for a big win in the district opener, as Boyle (6-3, 1-0 district) forced Garrard (2-9, 0-1) into 26 turnovers as it won for the seventh time in eight meetings between the teams over the past four seasons.

Even so, Webb said the Rebels aren’t where they need to be on defense.

“The boys are doing a good job, but we’ve still got some things we need to clean up,” he said. “But we’re not flipping the switch from one to the other. We’re trying to press a little bit, but then there’s times when we’ve got to get down and guard and be solid.”

Garrard had almost three times as many turnovers as field goals (9) and as a result was unable to keep pace with a Boyle team that posted its lowest point total of the season.

“We hold a team to 56 points … but if you’re just throwing it to the other team, you don’t give yourself much of a chance,” Garrard coach Ryan Young said.

The Golden Lions’ offense continues to struggle without Brayden Sebastian, who has missed nine games with an ankle injury. This was the sixth time this season they have been held below 45 points, and it was their lowest score since a 51-22 loss to Lincoln County in the 2010-11 season.

“We’ve got guys that need to play better with him being out, and tonight they did not play the way they can, and it’s just back to the drawing board and trying to get better,” Young said.

Boyle broke the game open in the second quarter, opening a 30-14 lead. Garrard scored only two points in the third quarter and shot just 16 percent from the field in the second half.

The Rebels were balanced in both scoring and rebounding as they worked to expand their rotation.

“I want to get some more kids in there, especially if we’re going to be more up tempo, trapping and pressing. We need bodies,” Webb said. “We’ve got kids that have been getting some more minutes the last few games, and that’ll help us down the road.”

Luke Imfeld led Boyle with nine points and was one of five players to score at least seven. Owen Barnes had a game-high seven rebounds and Luke Sheperson had six for the Rebels, and 12 of the 14 players who saw action for Boyle had at least one rebound to help the Rebels outrebound the Lions 36-30.

Boyle led 39-17 after holding Garrard scoreless for the first 7:17 of the third quarter, and it was 46-19 after another scoring drought of about three minutes that stretched into the fourth period. The Rebels led by as many as 30 points late in the game.

Webb said it’s important that the Rebels sharpen their focus as they try to bring everyone up to speed after dealing with injuries, illness and the football team’s run to the state finals that kept some players out of basketball practice until after the season began.

“We’ve talked for the past week or two about it: ‘We’ve got to stay locked in, and I’ve got to have your attention. I’ve got to have your focus on what we’re trying to do,’” he said. “Because to be honest, we’re still behind. We’ve practiced 49 times total, and I think the football guys have had 10 or 11 practices.”