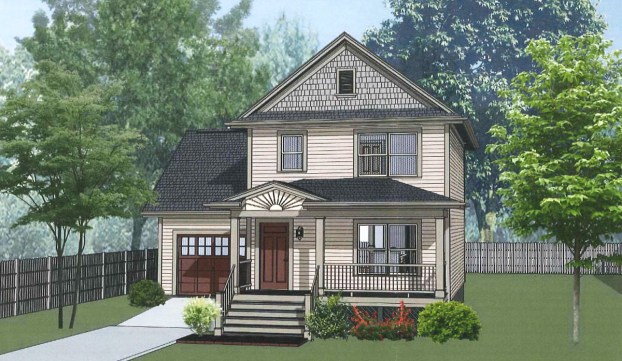 A rendering provided as part of a future land-use amendment application shows the type of house that could be built as part of a condominium project proposed for a 4-acre tract of land east of Hogsett Primary School in south Danville. (Image from Danville-Boyle County Planning and Zoning)

Condo project, distillery on tap for P&Z this month

January is looking like a pretty busy month for planning and zoning in Boyle County — though not quite as busy as it could have been.

There was a possibility that the P&Z Commission could have been holding hearings for five zone changes and four future land-use map amendments this month, P&Z Director Steve Hunter said. But once the filing deadline passed Thursday, only one zone change and one FLUM amendment application had been completed in time, he said.

But both public hearings at the Jan. 22 P&Z meeting are for significant projects — a housing development and a distillery. And the commission will be asked to approve new zoning regulations for both Junction City and Boyle County, as well.

Hunter said it’s “truly an injustice” to call the homes Wesley Carter wants to build in south Danville “tiny homes” — but that’s the popularized term that keeps getting applied around the country to homes that at least look similar to Carter’s proposed development.

“They’re standalone units; they’re high-quality; they’ve got a garage with them …” Hunter said. “He sees this as a real positive for the community as an infill development project, so it gets to the heart of smart growth.”

Carter is applying for a future land-use amendment that would allow denser residential development on about 4 acres of land in the center of the residential neighborhoods to the east of Hustonville Road in south Danville.

The development would be east of Franklin Avenue and south of Baughman Avenue, right near Hogsett Primary School. Hunter said because it’s early, he doesn’t yet have a specific conceptual plan showing how many homes Carter wants to build, but it could be between 30 and 35.

The homes would be sold as condominiums, meaning each owner would own their specific building and the surrounding land would be a shared space with grounds maintenance provided through a homeowners’ association, Hunter said.

“They’re going to have large amounts of open space and common space, walkable …” Hunter said. “This is a cool concept. I think you’re seeing these in bigger cities.”

Right now, the future land-use map calls for low-density residential on the property in question, meaning development is capped at five homes per acre.

If Carter is successful in getting the FLUM amended, he could then seek a zone change to allow for denser residential development.

Hunter said the target price for each home is expected to be around $130,000 to $140,000, making them more affordable than many others in Danville. Each one would have around 1,000 square feet and would be considered a “starter home” — but they would be real residential houses, not prefabricated structures.

One factor that could affect development to a certain extent is the existence of Tennessee Gas Pipeline No. 1, which runs underneath the property in two places.

The pipeline was a source of major controversy in Danville for years when its owner, Houston-based energy giant Kinder Morgan, attempted to convert it to carry fracking byproducts from the northeast to the gulf coast.

Kinder Morgan gave up on that plan in late 2018 and issued a statement that it would instead maintain natural gas service in the pipeline.

Hunter said natural gas pipelines are not regulated by the local planning and zoning commission, so the pipeline would likely only matter to the development in as far as easements around the pipeline could affect where or how Carter chooses to build.

Hunter pointed out that low-density houses could be built on the land today, and that numerous other homes in the surrounding area are already built on top of the pipeline. He added that thanks to recent revisions to local zoning ordinances, it is now prohibited to have a hazardous pipeline in residential zones. The more residential development there is then, the more difficult it would be for anyone to convert an existing pipeline to carry hazardous materials, he suggested.

“It gets harder and harder as we stay residential,” he said.

Hunter said the development also helps with a problem he’s seen since starting as P&Z director, more than two years ago — a lack of housing options and housing development.

“(Carter) sees this as a need that we have in our community, and it would fill a housing void that’s out there,” Hunter said. “And I agree.”

The Luca Mariano Distillery project was already approved for a future land-use map amendment in November, and now it’s following up with a zone change application for all 271 acres it plans to develop on the east edge of Danville. 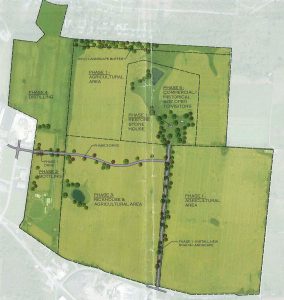 Hunter said Francesco Viola’s bourbon company wants to change the zoning on the huge tract of land from its existing classifications of mostly agricultural and a little commercial and resident to “light industrial.”

The zoning application also lays out phases of planned development for the wide-ranging distillery project.

Phase one would involve using large portions of the land for agricultural purposes; landscaping the existing road on the property; building a short road into the property from Letton Drive on the west side; and restoring the historic William Crow House that sits in the middle of the land.

Phase two would be construction of a bottling plant for Luca Mariano products. Phase three would be building rickhouses and expanding agricultural use of the land.

Phase four would be “distilling” and phase five would involve “commercial” activity and opening the historical site to visitors.

That’s all according to the architectural site plan submitted to P&Z as part of the zone change application.

“Even though we’ve already heard this case, I still think it’s a pretty big deal,” Hunter said. “It’s pretty neat what we’re potentially going to have happen out there.”

Hunter said he thinks P&Z staff will probably recommend some additional conditions for the commission to consider at the zone change hearing. The only condition proposed in the application is a commitment to complete a traffic study in the future.

“I’d like to see some real kind of defined conditions that we tie onto the property, related to access, building caps, uses, setbacks, things of that nature,” Hunter said. “I’ll send them some suggestions and see what they bring back before the planning commission.”

Also on the agenda for the Jan. 22 meeting is possible approval of two zoning ordinances — one for Junction City and one for unincorporated Boyle County.

The Junction City zoning ordinance, if approved by P&Z and the Junction City Council, will bring the city back under zoning regulations for the first time since it left the P&Z Commission in 2011.

Junction rejoined the P&Z Commission in 2019. Subdivision regulations are now in effect again, but the city still has to approve a new zoning ordinance before it can enforce zoning regulations.

The P&Z Commission was set to approve the city’s new ordinance in November, but it lacked a quorum and could not take action. If it approves the zoning ordinance this month, Junction City will then have 90 days to give the ordinance two readings.

Hunter said Junction City had a committee go through every page of the proposed ordinance.

“They looked it over and they think it meets their needs. It’s pretty much a similar ordinance (to what was passed by the other local governments) but it still needs to go through the test of a public hearing,” Hunter said. “… I feel pretty good that (Junction City is) pretty serious about getting a zoning ordinance back into play.”

Hunter said the updated ordinance will prohibit short-term rentals such as Airbnbs in single-family residential zones, and it will require conditional-use permits for the rentals in agricultural zones.

The January meeting of the Danville-Boyle County Planning and Zoning Commission will be 9 a.m. Wednesday, Jan. 22, at Danville City Hall.