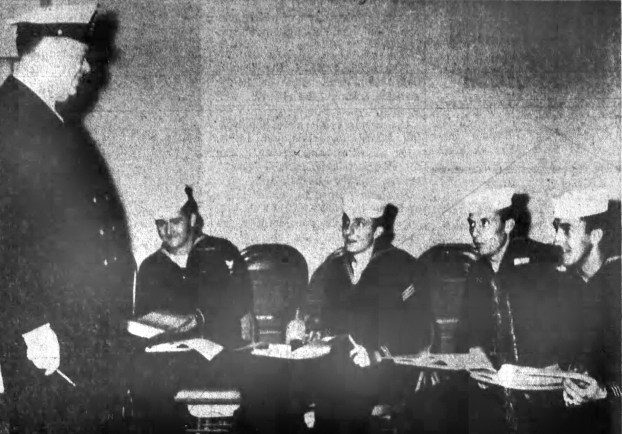 (Editor’s note: Information was taken from articles in The Advocate Messenger.)

A new $134,000 Naval Reserve Electronics Facility on the Centre College campus was dedicated 59 years ago.

The building was located near Centre’s Young Science Hall, and provided a new home for the Naval reserve electronics Division 5-3, commanded by Lieutenant Clay A. Colson of Brodhead. The only college-located facility of its kind in Kentucky, it trained radiomen, signalmen, electronics technicians, seaman recruits and seaman apprentices. Its personnel included Centre students and other Navy Reserve men in the Danville area.

“This building actually becomes a part of the overall sea power of our nation,” said Captain James B. Denny of Norfolk, Virginia, who was deputy chief of staff of the 5th Naval District.

Denny, a Centre alumnus and graduate of Lancaster High School, added: “I can assure you that your Navy has been and is being vigilant in protecting this country.”

Centre President Thomas A. Spragens said the building and equipment and the program it supports was only one part of a national enterprise in the Navy’s educational program.

“The academic community knows and appreciates the educational program which the Navy is and has been committed to over the years,” he added.

The reserve electronics division had been located in the Centre science building and was established in 1949. Its first officer in charge was USDR Carl R. Anderson, a Centre athletic director. Colson took over in June 1958, followed by other faculty members LCDR Roy Ellis of Forkland and Lieutenant Brice T. Leech and Jack Durham, a local insurance executive.

The facilities, dedicated in May 1960, had a floor space of 3,100 square feet and was constructed for about $84,000. The equipment was estimated at $50,000. It had five classrooms, a radio receiving room and radio transmitter room, plus an office space.

By KATE SNYDER Art Center of the Bluegrass IF YOU GO  “New Year New Art” will be up through Feb.... read more