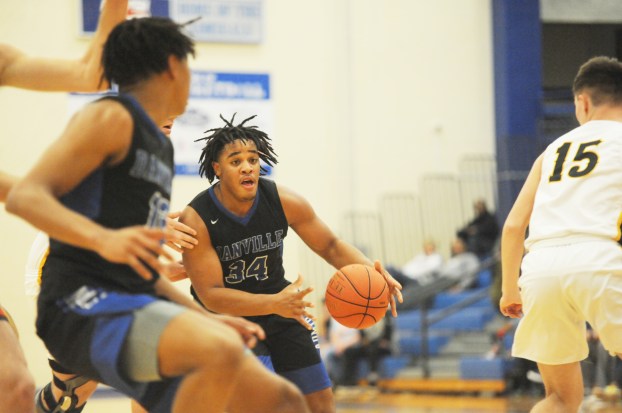 Life as a high school senior can be stressful. It can be even more so when you’re a four sport athlete like Danville’s Darrian Bell.

So how does he relax? It’s actually one of the four sports he plays — bass fishing.

“Fishing is what I’ve always loved to do,” he said. “I’d fish in tournaments where it’s cold and rainy and you’re out there in the cold and the rain. People don’t understand that you’re just out there having fun. And it helps me relax. Being me comes with a lot of stress and bass fishing helps me get a lot of it off while still competing and having fun. I don’t look at it as competing. I look at is as let’s go out here, have some fun and catch some fish.”

And if you’ve ever met Bell, you’d know that he’s one of the most relaxed guys around. In addition to the fishing, he credits all of his sports and natural personality with how he manages that stress — and even helping him in school.

“All the sports I play. Plus, I’m not really a dramatic person. I can be — it’s fun to be dramatic,” he said laughing. “When something happens, don’t overreact about it, keep pushing. For example, I didn’t start out well this year in English, I had a C. Mrs. Branson told me not to overreact, so I didn’t. I just kept doing what she told me to do, because if you don’t do what she tells you to, you’re going to fail. I have a 92 in that class now.”

But it’s been bass fishing that he’s loved all his life. So much so that he was one of the co-founders of Danville’s fishing team.

“Growing up, my dad took me fishing. I just thought it was really fun,” he said. “When I got to middle school, my youth minister went fishing a lot and he’d take us down to his house boat. When I got to high school my freshman year — youth minister had the boat, his son was still in high school. I wanted to fish, he wanted to fish — I helped co-found the bass fishing team here. We got help getting it started from Stoney Kissick — the coach of it — and he did a great job putting it together.”

Recently, he caught his biggest fish in tournament — a four pound smallmouth bass. But his best overall is around six or seven in a pond and five and a quarter pounds in a lake.

“It’s a feeling you can’t — there’s a certain feeling you only get when you catch a big fish,” he said.

But football is still his favorite, and specifically playing linebacker. And at Danville, almost nobody has been better at the position than Bell.

“I like the aggression. The team aspect. Being out there with the team — it’s not just you. Everyone has to come together,” Bell said. “I like being able to play with my hands, that’s why I kind of don’t like offense. You got holding calls and all that. I like being able to throw people off me. It helps me if I’m mad about something — football practice you can do whatever. It helps me let it all out.

“It’s just fun to me. People don’t understand how you can just go out and hit people. Coach (Jerrod) Dean calls it a car crash and you go through a lot of car crashes, but it’s just fun to just hit somebody. Just that intimidation.” 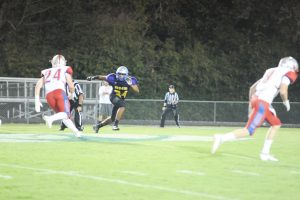 It was on the football field that Bell achieved his proudest athletic feat — leading his team in tackles and winning the state championship as a sophomore.

“I had Don Harris beside me. He’s Don(levy) Harris — he’s strong, he’s fast,” Bell said. “I started to get taller than him, longer than him — I’m still not stronger than him. But it was like ‘Oh, I beat Don Harris, I got more tackles than him.’ That was cool. He was the linebacker I looked up to my freshman year.”

But Bell is also finding success on the hardwood this year.

In his final year playing basketball, Bell has been a stud for the Admirals. He’s the team’s second leading scorer — averaging 12.6 points per game. He’s also led the team in rebounds, averaging almost twice as many boards as anyone else on the team with 8.5. All of that has helped Danville be one of the best teams in the region.

But Bell says he has a hard time reigning in that aggression that makes him so good on the gridiron.

“It’s kind of hard because you can’t just hit a guy and it’s really touchy,” he said. “Like the other night, going after a rebound, I tipped it and just kept on running after it and this guy jumped up. I didn’t have time to jump and I was just trying to move out of the way and hit him with my shoulder and got a foul.

“Basketball I have to control myself. That’s one thing I don’t like,” he continued. “You’ve got to be so intense and know your surroundings and control yourself so you don’t get a foul. That’ll take you out of the game and what’s the point in playing if you’re just going to come out of the game?”

Playing four sports is a pretty time consuming endeavor. So how does Bell balance that and the workload of being a senior in high school?

Halfway through the basketball season, Bell only has two more sports remaining in his senior year. So what’s his plans for the rest of it?

And with that mentality, it’s not hard to see why he’s had the success he’s enjoyed so far.

Danville atop the district in girls, boys basketball RPI

The newest RPI rankings are out from the KHSAA and Danville’s boys and girls both crack the top 25, and... read more