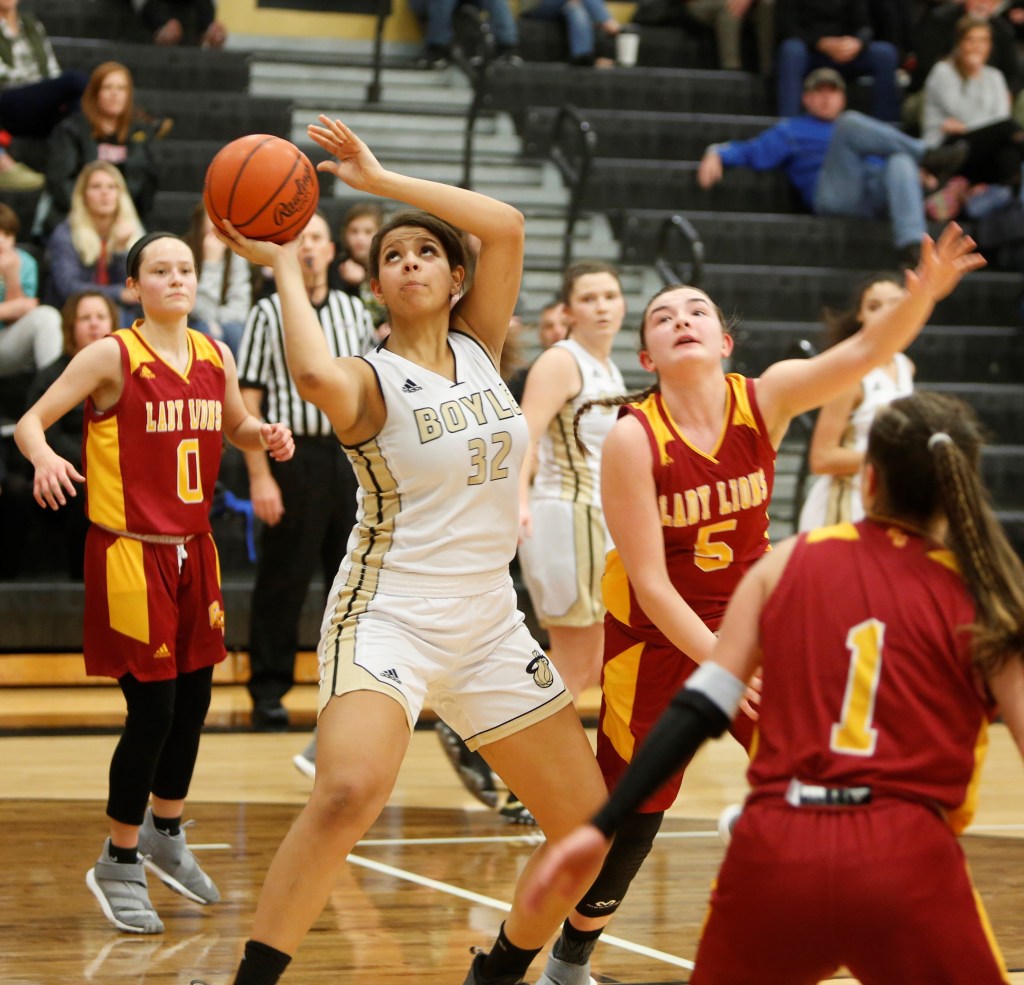 Alyssa Wray (32) of Boyle County puts up a shot after getting past Garrard County defender Jade Pevley (5) during the second quarter of Boyle’s 60-49 victory Friday. Wray scored 14 points for the Rebels. (Photo Mike Marsee)

Both the Boyle County and Garrard County girls are learning some things about themselves. Only one team, however, got to learn what it feels like to grind out a critical district win.

Boyle showed Friday night that it learned some important lessons during a difficult holiday season, holding off Garrard for a 60-49 victory in the 45th District opener for both teams.

The Lady Rebels lost four of six games in two holiday tournaments at Nelson and Russell counties, but coach Ryan Wiersma said things have been looking up since then.

“We’ve had a great week of practice. We’ve learned how to handle adversity,” Wiersma said. “We didn’t get a lot of learning opportunities (during the tournaments), but we came back and learned how to handle ourselves, how to bounce back and drop the baggage and move on to the next play. And our girls are doing a great job of picking each other up when they do make a mistake.”

Mistakes were made Friday night, even as Boyle (5-7, 1-0 district) tried to finish off Garrard (6-6, 0-1). The Lady Rebels had nine turnovers in the fourth quarter, one more than their combined total over the first three periods.

“We had a few turnovers, and we’re going to learn from them,” Wiersma said. “A lot of teams in our district – mainly Danville – press you nonstop, so we’ve got to learn from those things, and it’s better to learn from a win than a loss.”

Garrard is still trying to learn how to win games such as these, and it’s clear the Lady Lions are getting closer. They have lost 45 consecutive games to district opponents other than Kentucky School for the Deaf, including 14 straight to Boyle since their last win over the Lady Rebels in January 2013.

But they held their own in this game before Boyle took control with a 15-0 scoring run late in the third quarter and early in the fourth. Garrard led on three occasions in the first half and two in the second prior to that run.

“I’ve learned that I’ve got a group of fighters,” Garrard coach Jimmie McCulley said. “It’s been a long time since they’ve been in position to win a district game. Last year they had no shot, and the last couple years they were just fodder for the other team. They were the sacrificial lamb. I told them, ‘You’ve got to believe. You belong now.’ They’ve been beaten on so much that they don’t know how to win the big game.”

The Lady Lions led 33-30 with 3:03 remaining in the third quarter but then went scoreless for the next 4:50 while the Lady Rebels ran off 15 unanswered points.

A 3-point goal by Keely Bowling gave Boyle the lead for good at 35-33, and Bowling scored five of her nine points during that run.

The Lady Rebels hit eight of 12 free throws in the fourth quarter. Peyton Bugg was 3 for 4 at the line, and Bowling and Alyssa Wray each went 2 for 2.

“We did a great job of going to the free throw line and finishing,” Wiersma said.

Bugg and Wray led Boyle with 14 points each, and Ella Coffey had a team-high seven rebounds.

Garrard struggled to score from close range, missing a number of shots in or near the paint in the second half. The Lady Lions were 8 for 36 from the field after halftime.

McCulley also lamented the fact that his team didn’t turn up the defensive pressure sooner, given the effect it had on Boyle in the fourth quarter.

“We weren’t in foul trouble, and we should have pressed them a lot sooner than we did. When we started pressing them they started turning it over, and we just waited too late and that’s on me,” he said.

The lead changed hands four times in the final 3:11 of the first half before Boyle emerged with a 22-21 edge. Wray, who had 10 points in the second half, scored the first two baskets of the third quarter to extend the Lady Rebels’ lead to 26-21.

Garrard answered with seven straight points on a 3-pointer by Brittany Butner and two layups by Jade Pevley, who scored a game-high 18 points for the Lady Lions, to go up 28-26.

Following the decisive Boyle run, Pevley and Carolina Gonzalez combined for eight unanswered points to pull Garrard within 45-41 with 3:47 to play, but 3-point baskets by Bugg and Kelsea Hinkle helped Boyle push its lead back to nine at 54-45 with 1:20 left.