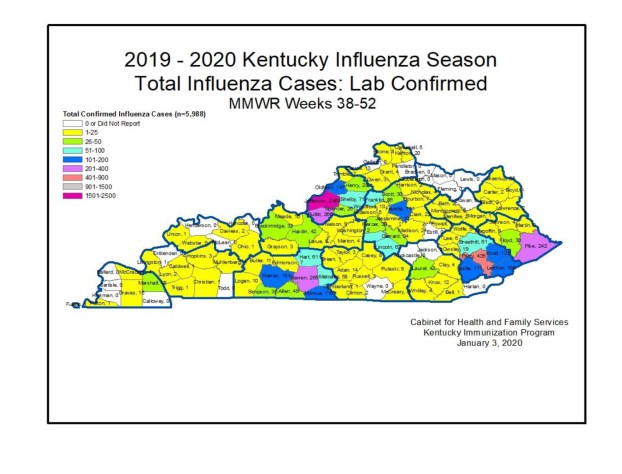 THe Kentucky Influenza Activity Report for the final week of 2019. (Kentucky Cabinet for Health and Family Services)

“There’s definitely flu in our area,” says Brent Blevins. That’s his unscientific overview of the weekly influenza report from the Kentucky Department for Public Health, which shows the flu with “widespread” reach — not only in Boyle County, but throughout the nation.

Blevins, the director of the Boyle County Health Department, says it’s an important reminder that it’s not too late to get a flu shot. “But the longer you wait, the longer you get into the season before it becomes effective,” he says.

“If you get it today but were already exposed to it, you can still get sick,” since it takes two weeks to become effective, he explains.

According to the Department of Public Health, there have been 5,988 confirmed cases of the flu in the state since flu season began.

Of those, 83 have been determined to be within Boyle County. That’s compared to 39 in Mercer; 34 in Garrard; 63 in Lincoln; and only eight in Casey.

As far as why Boyle is higher than the surrounding counties, Blevins says he’s not sure exactly why that is, unless more are actually going to the doctor to get tested and confirmed. “Or more who end up sick in the ER or one of their clinics, so they’re reported here more.”

Jeremy Cocanougher, marketing communications manager with Ephraim McDowell Health, says if someone from out-of-county is seen at the Danville hospital or in any of its clinics and is confirmed with the virus, they are still reported based on their county of residence.

Of course, Blevins says, these numbers are only counting those who have actually gone to the doctor to get confirmed. Many can have the flu virus and not get treated. Those numbers also don’t count the rapid influenza antigen tests, where health providers will swab a patient to determine treatment on the spot.

Those tests then have to be sent off to get the formal confirmation, using other tests.

“What they usually do is a quick, rapid test — they swab you, and 15 or 20 minutes later they can tell you. I like the fact that they send every one of them off, but if you’ve got someone in front of you, as a doctor, and need to know something fairly quickly, it’s good to have those around. But I’m not sure about the percentage of false positives,” Blevins says. “This report is based on just the confirmed cases, that have been sent to the lab and been cultured.”

Statewide, the flu hit ages 1-10 the hardest, which is expected, he says.

Kids “wipe snot on their hands and touch everything,” Blevins says. And now that school is back in from the holiday break, it can lead to the virus spreading even more quickly.

“But schools have gotten better about sanitizing, and teaching children to do things like sneeze into their elbows, wash their hands more often and to keep their hands off of their faces …”

The Centers for Disease Control estimates that so far this season, there have been at least 6.4 million flu illnesses nationally, resulting in 55,000 hospitalizations and 2,900 deaths. There have been 27 reported pediatric deaths associated with the flu, so far. The geographical spread of the virus continues to increase across the country.

Blevins says the health department began advocating for the flu shot in September, which it does every year. But usually the winter months is when the uptick in confirmed cases begins.

Blevins says for him, yearly, it’s always the same. “Encouraging people to get vaccinated, wash your hands, if you’re sick, stay home. I’m also a big advocate of always including your primary care doctor in your care. Go see your doctor, so you can at least rule it out.”

He says there are also the cases where someone will have something flu-like, but it may not necessarily be the actual strain.

“But as long as you know and can get it confirmed, you can find out if you actually need some kind of medication. Instead of it being a two-week battle of the flu, it can be one.”

Jacobs Hall has stood on the campus of Kentucky School for the Deaf in Danville for most of the school’s... read more