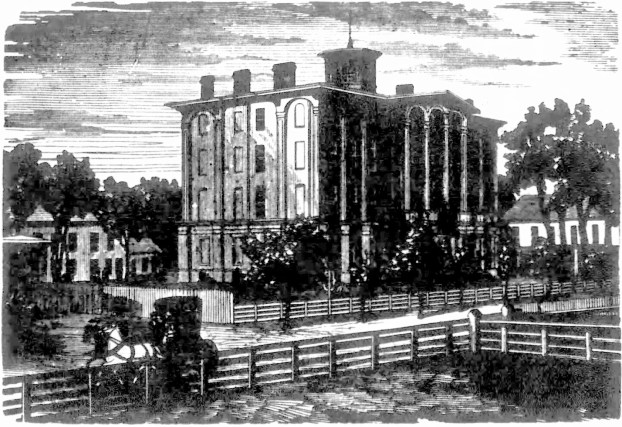 This artist's sketch of Jacobs Hall was made during "the Civil War years" by a Kentucky School for the Deaf graduate, who etched it onto a wooden block. The sketch was reprinted in The Kentucky Advocate in January of 1966, after Jacobs Hall was awarded national historic landmark status. (Advocate-Messenger archive)

Jacobs Hall has stood on the campus of Kentucky School for the Deaf in Danville for most of the school’s 197-year history.

It was already well over 100 years old and the oldest remaining building on KSD’s campus 54 years ago, when it was announced on the front page of The Advocate-Messenger that it would be named a national historic landmark.

The National Park Service had informed KSD Superintendent Charles B. Grow that the building was eligible for landmark status and Grow intended to “apply, as requested, for the certificate and plaque for Jacobs Hall, Kentucky School for the Deaf, to be included in the impressive registry,” according to the Jan. 7, 1966, paper.

“The Registry of National Historic Landmarks is a permanent register of nationally significant historic and archaeological sites of the United States. Its purpose is to identify and recognize those sites and to encourage their owners to preserve them,” the article explained. “Eligible landmark sites, such as Jacobs Hall, are chosen through studies prepared by the National Survey of Historic Sites and Buildings, evaluated by the Advisory Board on National Parks, Historic Sites and Buildings and Monuments, and approved by the secretary of the interior.”

The story detailed the history of KSD and Jacobs Hall, explaining how KSD was established in 1823 as the first publicly supported institution for the education of the deaf in the U.S. and in 1826, the school moved to its South Second Street location in Danville, “where it was temporarily housed in a two-story brick building already standing on the property.”

“The first building specifically constructed for school purposes was begun in 1835,” the story recounts. “Today (in 1966), the school consists of 10 major buildings and a campus of 230 acres and runs through to South Third Street. Jacobs Hall, nearly 109 years old, although the oldest surviving structure on the KSD campus, is now used as a dormitory for girl students. However, it served until 1882 as the main building of Kentucky School for the Deaf.”

“In simplest terms, the KEA and those House members who speak for it have called for $900 in increases over the next two fiscal years instead of the $400 average contained in Gov. Edward T. Breathitt’s proposed new budget.

“The KEA argument is familiar: Previous raises have been barely enough to keep pace with progress, and unless more money is forthcoming, teachers will begin an exodus from Kentucky to higher-paying states.

“But the Breathitt regime has no apologies on that score. it claims, for one thing, that its teacher salary increases would amount to 75 percent of the previous administration’s — and this without the boon of added taxation which arrived in 1960.”

“Rep. Edwin E. Willis, D-La., chairman of the House Committee on Un-American Activities, announced Thursday that contempt citations would be sought against Robert M. Shelton, imperial wizard of the United Klans of America, and six other southeastern seaboard Klan leaders.”

‘Ring Around the Moon’ deals with some heavy issues — in rhymes

Local author Mike Norris has penned another book. “Ring Around the Moon: Mommy Goose Rhymes” was published recently by the... read more