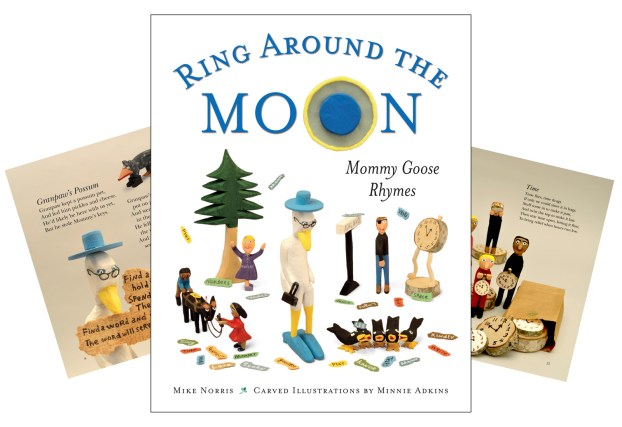 Mike Norris' book "Ring Around the Moon" contains 60 rhymes, with photographs of more than 170 carvings. (Book cover and pages contributed)

‘Ring Around the Moon’ deals with some heavy issues — in rhymes

Local author Mike Norris has penned another book. “Ring Around the Moon: Mommy Goose Rhymes” was published recently by the University Press of Kentucky.

“Mother Goose hails from England, but Mommy Goose is a Kentucky bird — specifically Eastern Kentucky. In Jackson County where I grew up, mothers were typically ‘mommies.’ A 65-year-old man would say, ‘I’ve got to go check on Mommy.’ So ‘Mommy’ reflects the culture of Southern Appalachia,” Norris explains.

And sticking with the trend he began with his past books, the illustrations aren’t drawings or paintings; instead, they are photographs of woodcarvings. Norris says working with woodcarver Minnie Adkins “is wonderful. She doesn’t understand a behavior most of us are familiar with…procrastination. With her let’s-do-it-now work ethic, her talent, and almost 80 years of experience, it’s not a long, drawn-out process.”

The book offers 60 rhymes, with photographs of more than 170 carvings. Norris says the simpler, more humorous rhymes are used in the beginning, with the longer, “more demanding poems” appearing as the book progresses.

“Hopefully, younger readers can ‘grow with the book’ and appreciate additional layers of meaning as their abilities develop. And since the initial writing, I can see that the rhymes fall into different categories.

“One, mainly in the opening pages, I’d call ‘just for fun…and yet.’ These are light and humorous, but as a group reflect recurring themes—conflict and kindness, for example.”

Norris says there are also rhymes that deal with “classic mountain motifs, such as leaving home to find work or mountain folklore. For example, the legend that if you ask a granddaddy longlegs which way the cows have gone, it will point you in the right direction.”

The two others are poems that deal with the “problem of time,” he says. “Since Mommy’s getting a little long in the feather—and those that touch on what I’d call more 21st Century issues.”

Norris says these are issues like “the contentious mood in the country right now, bullying, gender roles, addiction. None of these words are used in the book, but you don’t have to look too hard between the lines to see the references.”

Norris says he understands how others could say, “‘Those are pretty heavy subjects for a children’s book; why not deal with them in another genre?’ If you’re attracted to the things I am — form, musical language, meaning — these aren’t in favor in much of today’s poetry for adults.”

That’s not to say that some good writing isn’t being done; “It is,” Norris says. “But totally free verse comes at a cost, and part of that cost is readership. With enough time and effort, you can you can derive form and meaning from anything, but life’s short and people have to earn a living.”

Besides, he adds, the best children’s books — such as “The Giving Tree,” Charlotte’s Web,” “Where the Wild Things Are,” or the “Wizard of Oz,” for example — deal with some very heavy subjects.

“And if they’re artfully and honestly presented, children can handle them and feel reassured they’re being leveled with.”

Norris says he can quote most of the rhymes from his books by memory. But there’s one he wanted to share with readers.

“Here’s one that touches on the lack of unity we’re experiencing these days. The speaker is a little girl:

Are we all us,

Or just a part?

Who can be trusted

Am I for mine,

And you for yours?

Norris retired as director of communications from Centre College in 2011, but says he’s “never stopped going to the office. The office is in Emeritus House where he enjoys the company of former faculty and staff members, wide-ranging Monday morning coffee conversations, and a quiet workspace in which to focus.”

“Ring Around the Moon” and other books by Norris and Adkins can be found on Amazon, Barnes and Noble, Target, Walmart and other websites, as well as in bookstores.