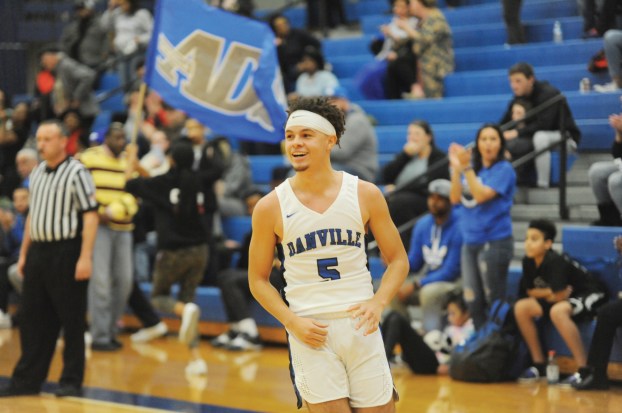 Ads come out of physical game on top

On Saturday, Danville coach Ed McKinney said that Tuesday’s district opener against rival Boyle County would be a “grind game”. And while his predicted scoring range of 40’s or 50’s turned out to be off by about 20 points, his team’s 70-60 win was certainly one for the grinders.

“I thought it was a good, physical Danville-Boyle game. They let us play which I thought was good,” McKinney said about the game. “The kids handled it well — both teams. Sometimes in a game like that, you’ve got to get control of the game. I thought it was physical but it never crossed the line and I think that’s how the kids want to play. I was fine with that part of it.”

One thing that McKinney was not fine with was his team’s 17 turnovers.

“We got to cut down on turnovers — 17 is too many,” he said, acknowledging that Boyle’s up tempo defensive style may have played into it. “It puts you more in a transition style game. But 17 turnovers is still too many. In a game that’s sped up, you’ll have some because you’re trying to make plays ahead of you, but it can’t be 17.”

That defense is something new to Boyle this year under first year head coach Dennie Webb. While it may have led to too many turnovers for the coach’s taste, junior guard Dante Hayden likes the style.

“It kind of speeds us up and that’s how we like to play. We like to get it and go,” he said. “We’re not the kind of team that wants to get into an offense and run a play. We can do that, but it’s just not our style of play. I like to play up tempo to get easy baskets and open looks.”

Hayden was the team’s MVP Tuesday night. The junior finished with 24 points and four assists. A couple of trips down the floor, he pulled up off the dribble and let a three fly, knowing it would go in.

“Dante obviously played really well. Had a great floor game beyond just shooting,” McKinney said. “Our guys do a really nice job of finding guys when they get hot like that. But he did a really good job of passing.”

“I couldn’t do anything without my teammates,” Hayden said. “Dribbling in the lane, kicking out to me and finding me for three. I guess it was just my night tonight.”

One of those teammates responsible for driving the lane and kicking it out is sophomore point guard — and Boyle transfer — Aiden Slone.

He finished with eight points, four assists and five rebounds, and one and-one play that caused an eruption from both the Danville bench and student section.

“We haven’t had a guy like him ever, I don’t believe,” Hayden said about his backcourt mate. “Him coming in and us meshing together as a team and a combination up top. It’s really been good and has opened things up for me. I love the way he plays and just his attitude. He’s a really good player for us.”

With the exception of Hayden’s 24, the rest of the Admirals all had a balanced night, and that’s something McKinney loves seeing.

“Darrian Bell again — just a beast. He gets every loose ball,” McKinney said. “Nick Price came in and did a really nice job. He had really good minutes. Jalen Dunn and Ethan Cooper — Damion (Givens Ford) got hurt — Trey (Dawson) had 10. We got good play out of everybody. Our points were really balanced.”

The win improves the Admirals to 11-4 and 1-0 in the district, and McKinney feels like his team is just now starting to figure itself out.

“When you’ve got so many pieces playing different positions from last year and we lost some great players from last year. So people are — even though they played — are settling into different roles,” he said. “We’re starting to get a little bit of a floor underneath us. This is what we’re doing and this is how we are — this is what this guy can do. We’re getting a good rotation off the bench and I’m getting more comfortable with that rotation.

“So for the first time, I feel like we can start getting better from here on out. First month of the season is just trying to figure your team out. We might be able to take a bit of a step forward here the next few weeks.”

It’s January already, and the Boyle County boys are still trying to catch up on what they missed in December.... read more