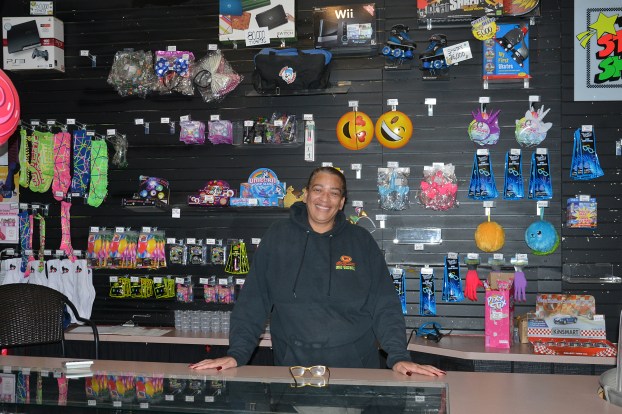 Karen Burch is a familiar face at Windjammer Fun Center. She said she loves playing 1970s and '80s music for people to skate to. But on Thursday nights it's Christian Music Night. (Photo by Robin Hart)

One Day: Danville skating rink manager has been entertaining kids for decades

Karen Burch has been watching the good times roll by on and off for 30 years as a manager at the local roller-skating fun center. 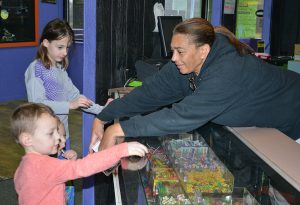 As a girl, Burch said she loved roller skating with her friends at Finley’s Fun Center. “It was an every weekend thing,” she said as she watched several youngsters on their holiday school break roll around the wooden rink as multi-colored lights danced off the walls one day last week.

Burch is one of two managers at Windjammer’s Fun Center — a job she’s had for about 10 years. And before that, she was also the manager at Finley’s, the previous name for the business, on and off for 20 years.

Standing behind the long counter where people cash in their arcade game tickets for prizes, she said she enjoys her job. She plays upbeat 1970s and ’80s music on loud speakers for children, teens and adults to skate to — it’s the music she grew up listening to.

On a typical day, Burch will book a couple of birthday parties, sell admission tickets, answer the phone, hand out prizes, and make the schedule for the other workers. She also prepares the concession foods like pizza, chicken strips, fries, cheesy bread, mozzarella sticks, popcorn and cotton candy. Burch keeps stock of the food and paper supplies and places orders when they get low. About once a month, she orders toys and trinkets for the “Stuff Shop.” 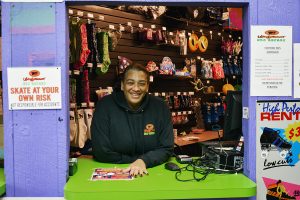 Karen Burch greets guests at the front window at Windjammer Fun Center, where she’s worked on and off for 30 years.

When the fun center gets busy on the weekends — there are also many arcade games in addition to roller skating — nine other employees help handle the skate rentals and food service. On really hectic days and nights, Burch said, “It gets stressful sometimes. But, that’s not even the right word to use.” She explained that the job requires them to deal with a lot of people at one time, but it’s not really stressful.

Burch used to skate up until about eight years ago when she fell and broke her leg. It wasn’t a skating accident, she said, but it caused her to go on the side of caution and quit skating. “It’s hard being out here and not being able to skate.”

On Saturday mornings, she and other employees give skating lessons from 10 to noon. “But I don’t put on skates,” Burch said laughing.

Most of the employees are high school kids, she said. “A lot of times it’s their first job.” She’s glad she can give them a start in the job market, because what she’s noticed over the years is that teens are required to have previous job experience before they can land other jobs, even ones that should also be considered first jobs.

“How are they supposed to get a job” if they can’t get a first job? She asked, shaking her head.

Burch said she doesn’t have kids of her own, but, “I’ve got all these kids out here. … I’m always helping the kids out. That’s what I do. … It’s a fun atmosphere.”

Our featured pets this week are Shelby and Snowball. Shelby is a pretty 10-month-old tabby and white cat. She was... read more