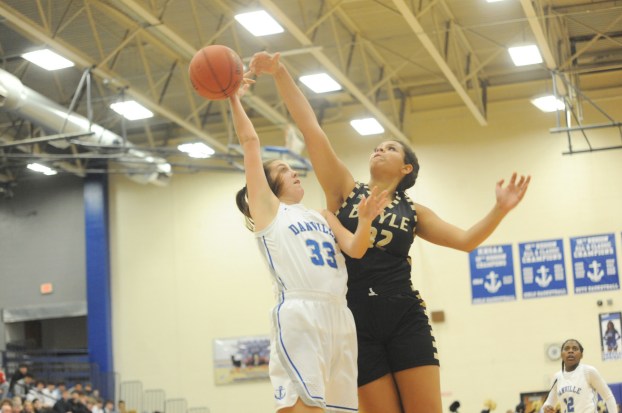 Alyssa Wray gets her first of seven rejections on Tuesday. (Photo Derek Brightwell)

Boyle kept a shorthanded Danville close on Tuesday night until they didn’t. For three quarters of Tuesday’s 50-38 road loss, the Rebels were within 10 points. And a large part of that was the defense of senior Alyssa Wray and the offense of junior Emily Glasscock.

Wray finished the game with seven blocks and 10 points and pulled down six rebounds as well. The shots she didn’t block, she altered. And on some possessions, outright changed the way the Admirals attacked.

Tuesday’s performance is a continuation of a strong stretch that Wray has put together since the start of the new decade.

“Alyssa has a done a great job since the new year,” Boyle coach Ryan Wiersma said. “The last three games, she’s really starting to spark and develop into a leader. She’s starting to give up more of herself for her teammates. She’s starting to inspire other people and we need more of that.”

Glasscock picked up the offensive pace for Boyle who’s two leading scorers — Keely Bowling and Peyton Bugg — were the focal points for the Danville defense. That’s something that Wiersma says he wants to see more consistently if they’re going to compete in the district.

“Emily is great as our second penetrator. She’s got a really good body to get in there and finish,” he said. “We need to get some consistent play like that out of her. Teams are going to key in on Keely and Peyton — they’re our top two scorers. Their defenses are going to be set on not letting them get shots up. Between Alyssa and Emily and Kelsea (Hinkle) we need some consistent play with them stepping up.”

But in the fourth quarter, Danville’s press got to the Rebels and the game slowly slipped away.

“We knew they were going to press. We’ve struggled against the press all year,” Wiersma said. “We’ve made some changes and we’re getting a little bit better but we need to improve because a lot of teams in our district press. They’re a very good team, coach Mason’s done a great job of getting them in their press. It’s their staple so we’ve got to figure out how to handle the ball against a very physical team.”

That physicality is something that Wiersma is also working to improve in his first year on the Rebel sidelines.

“Right now we’re battling a lot of our own demons,” he said. “We keep talking about being the most physical team and setting a tone every single game. Until you do that, you can’t go out and beat a team like Danville.”

As the Rebels (6-8) continue into district play with a 1-1 record, Wiersma is hoping his team can stay the course and that the incremental improvements can become more significant ones.

“We have to change what we hang our hat on. That’s defense and physicality and value with the basketball. We preach it. We’re working on it. We’re getting a little bit better but to beat this team by the end of the year, we’ve got to get a lot better.”

The theme of this year for Danville’s girls basketball team, coach Judie Mason said at the beginning of the year,... read more