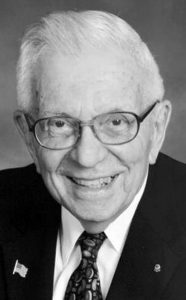 Thomas Parker Carter, 95, husband of Julialice Carter (d. 8/17/14), passed away on December 7, 2019 in Danville, KY. He was born in Carlisle, KY on October 20, 1924. Tom served in the Army during WWII in India, Pakistan, Burma and other countries in Southeast Asia. Upon leaving the service in 1946, he attended and graduated from Washington University in St. Louis, where he met Julialice. They were married in 1949 and moved to Danville, KY, where he went to work for Kentucky Utilities and advanced to become Division Manager before retiring in 1990.

Tom was an active member of Centenary United Methodist Church for over 70 years, chairing many of the leadership committees, and was a member of the choir for 66 years. He was a past president of the Lions Club and served as an auctioneer into his 80’s, a former Chairperson of Danville’s United Way Campaign, a volunteer bell ringer for the Salvation Army for many years, and a long-time trustee of Lindsey Wilson College, from which he received an honorary doctorate. He was an avid photographer and, with Julialice, traveled the world visiting every continent (though he pointed out that he only flew over Antarctica).

A Celebration of his life will be at 11:00 a.m., Saturday, January 11, 2020 at Centenary United Methodist Church in Danville. Visitation will be prior to the service at 10:00 a.m. In lieu of flowers, memorials may be made to the Centenary United Methodist Church Mission Fund, the Lions Club, the United Way or the Salvation Army. The online guestbook is available at www.stithcares.com.