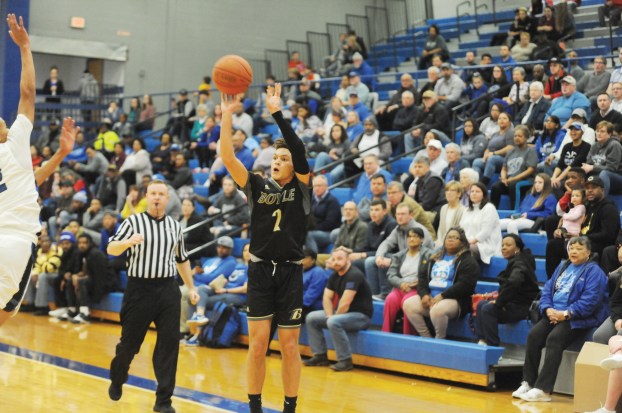 Tuesday’s loss leaves Rebels with lots to work on

Boyle County took a 31-29 lead into the half, but in the third quarter, the Admirals came out red hot and the Rebels couldn’t answer before falling 70-60 for their first district loss of the season.

“They outplayed us in the third quarter. They took it at us,” coach Dennie Webb said. “We were on our heels and didn’t do what we wanted to do offensively. The better team got us tonight. They were the better team hands down tonight.”

While Boyle’s up tempo defense led to 17 forced turnovers — compared to only 12 for their offense — it was the missed opportunities that Webb talked about after the game.

“We got some turnovers early but we didn’t convert on all of them. I don’t know if that got us in a funk,” he theorized. “There were other times we’d have steals that we’d been getting and we just didn’t get them tonight. I don’t know if it’s the big stage or if we’re just on our heels. But we’ll get better.”

This year’s Boyle County team is young — with multiple underclassmen starting and playing big minutes — and with a first year head coach in Webb, it’s been a learning year for the Rebels (6-4).

“Well we’re all young for the most part. We’re playing a lot of sophomores and freshmen,” Webb said. “It’s a learning experience. We play a lot of guys — 10 guys. Try to rotate guys in and out, maybe didn’t get enough in there in the second half. They’ll grow and learn from it. That’s part of the reason you play these games now. Next time around hopefully will be a different outcome.”

One bright spot for Boyle was the play of senior Luke Imfeld, who finished with a game high 28 points and pulled down six rebounds as well.

“Luke’s got to put the ball in the hole for us. He does that really well — he scores really well. The thing is we’ve got to get some people to help him out a little bit. He can’t carry us on his own,” Webb said. “We’re not shooting the ball well. I told the guys that we’re settling for too many jump shots and the only jump shooter that’s shooting consistently right now is Luke. Everybody is else is very inconsistent. Those are things we have to get better at.”

Danville’s defense got Boyle off its game on Tuesday, and Webb felt that there were some sets where his team seemed to be rattled by the environment.

“The kids battled, but I felt like we panicked a little bit offensively. They came out and put a little bit of pressure on us and we panicked,” he said. “We didn’t get into the sets that we called. Did a little more 1-on1 and trying to do things on our own too much.”

Boyle drops to 2-1 in the district after opening the season with a win over Danville Christian Academy and getting a win over Garrard County last week, but Webb knows that the season is only going to get tougher from here.

“We got a lot of big games coming. We got another one against Danville, another one against Garrard and they’ll probably have (Brayden) Sebastian back,” he said. “We’ve got two against Lincoln coming. It don’t get any easier. Next two weeks are some big games. They’re all big in the district. We’ve got to play more confident and more together.”

Ultimately, Webb is confident in his team’s ability to bounce back, but still, he didn’t mince words when it came to Tuesday.

Our featured pets this week are Patty and Rosie. Rosie is a precious 12 week old kitten. She is white... read more