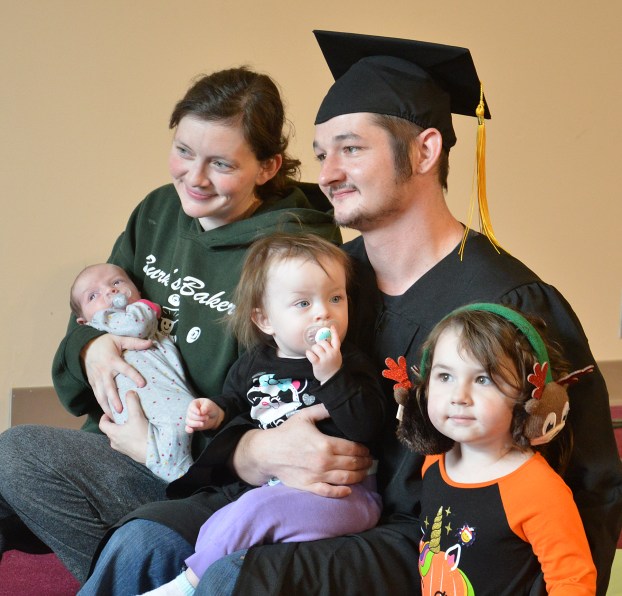 D.J. Alcorn, poses for a family photo with his wife, Becky, with their three daughters, from left, Amelia, Eliza and Lilli, following the Boyle County Adult Education’s GED graduation ceremony in December 2019. Alcorn holds the record of earning his GED in just one day. (File photo by Robin Hart)

Kentucky residents will no longer pay to receive their GED, thanks to a change announced by Gov. Andy Beshear and Lt. Gov. Jacqueline Coleman on Tuesday.

All testing fees will now be waived for every Kentuckian seeking a General Educational Development certification, Beshear said. It’s expected to cost the Education and Workforce Development Cabinet around $600,000 annually to cover the GED fees, according to a news release from Beshear’s office. The price for all four parts of the GED certification had been $120.

“This state funding will remove one more barrier for Kentuckians and provide them one more opportunity to earn their GED — a critical piece to helping the more than 335,000 Kentuckians without a GED or high school diploma to participate in our workforce and thrive,” Beshear said.

In Boyle County, which has one of the state’s top-10 adult education programs, everyone already has the cost of their GED tests covered, said Al Crout, who heads up the program. But that’s thanks to a generous grant from the United Way and contributions from local individuals and businesses that cover the approximately $7,000 needed each year, he explained.

“We have, this year, approximately 75 people so far, so it will probably be close to 100 this school year” studying for their GED, he said. “… If they did not have the GED paid for, many of them would not be able to afford it.”

Crout said the Danville community “has been very receptive” to providing the funding necessary to make GED tests free, and “so far, we’ve been able to pay for everyone’s tests. But there’s no guarantee that would always be available.”

Now, Beshear’s new policy means Boyle County Adult Ed won’t need to fundraise and anyone interested in attaining their GED will know for sure going into the process that their testing fees will be covered.

“It’s huge. It’s a wonderful program that they’re starting,” Crout said, predicting the change would result in even greater numbers of people signing up to earn their GEDs. “… It may take a little time for people to have the information that it is free, but as soon as they do, I know that’s been a barrier for some and I think that we will see the numbers grow.”

Boyle County Adult Education is already one of the top programs in the state; it has already exceeded its goal for GED attainment set by the state, and there’s still half the school year left, Crout said.

He attributed the success to “great instructors” like Beth Leahey and Gail Jackson.

“I’ve been in education for nearly 30 years as a teacher, as a principal …” Crout said. “I know what a good instructor looks like. We’ve also been able to build a program that pinpoints student needs for a test. We don’t do a lot of re-teaching.”

More than half of Kentuckians who lack a GED or high-school diploma are not currently working, according to Beshear’s news release.

“By waiving GED testing fees, Kentuckians who are either unemployed or underemployed due to lack of education will now have access to the education needed to place them on a meaningful career pathway,” according to the release.

Boyle County Adult Education is the county’s local “Skills U” center, which already provides no-cost adult education services, such as GED test preparation. The program also provides help transitioning to post-secondary education and with job training, according to the release.

Kentucky requires a GED Ready Practice test to be taken prior to taking the GED exam. Crout said while the cost for taking that test is $24, that cost is already covered by the state.

For anyone interested in earning their GED, Crout said they can give him a call at (606) 922-6819 and set up an appointment to get registered and do some pre-testing. The length of time it takes to complete a GED varies based on the educational level of each individual, but on average it takes about three to four months.

“We’re just really excited about the possibility of having more students,” he said.