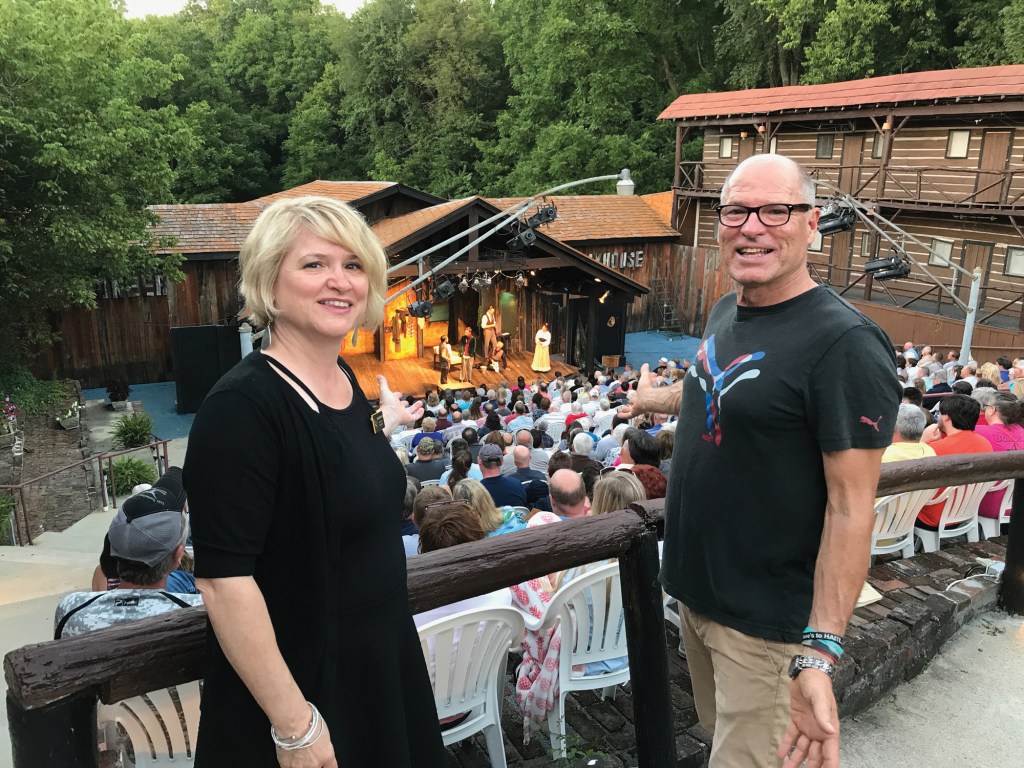 Heather and Robby Henson, siblings and coworkers at Pioneer Playhouse, will receive the 2019 Arts Citizens of the Year award Monday during the Danville City Commission meeting. (Photo contributed)

Robby Henson says he’s pleased that the Arts Commission chose to recognize the “we are stronger together than apart” attitude that he and his sister, Heather, bring to their jobs at Pioneer Playhouse.

The Arts Commission of Danville/Boyle County selected Heather and Robby Henson as its 2019 Arts Citizens of the Year award recipients. It normally selects one individual for the accolade, in honor of a lifetime of work in the arts.

Mimi Becker, director of the Arts Commission, says the two siblings are “following in the footsteps of their mother, Charlotte, who was selected in 2006. While they are well-known for their work with the playhouse, it is also their individual artistic careers which led the Arts Commission board to select them from among many worthy nominees.”

Heather says she’s glad her mom received the award previously; she says her mom is a “bit of an unsung hero,” and has always been the backbone of the theater.

Before the two returned to the theater full-time, Heather had lived in New York City, working for HarperCollins Publishing, and became a ghostwriter for many of the “Little House” book series, adapting chapter books from the original novels.

Meantime, Robby had embarked on a film career which led him throughout the country and into Europe. He directed “The Badge” and “Pharaoh’s Army,” two acclaimed feature films.

Heather eventually published nine award-winning picture books and novels under her name for children and young adults, with many of them featuring stories of life in Kentucky and being named on “best of” lists, as well as included on the Bank Street Best Books of the Year list.

Robby began making documentaries, with six receiving awards and others being aired on PBS. His piece “Trouble Behind” was screened at the Sundance Film Festival.

His most recent documentary, “I Come From,” tells the story of prison inmates who became artists, which came from his work done with the Voices Inside program at Northpoint Training Center, teaching inmates writing and performance skills. Pieces that inmates wrote while in the program have been produced, winning awards.

At the theater, Robby has been instrumental in developing the Kentucky Voices play series, and also teaches screenwriting and media production at the University of Kentucky.

From the mouths of siblings

“Robby and I were definitely born and raised in the arts,” Heather says. After all, the playhouse has been around for 71 years now, founded by their father, “Col.” Eben Henson. She says growing up, it’s just something they lived and breathed. She was raised on stage, performing, or backstage, watching something her dad had written and was directing, or watching her mom sing in front of the audience.

But she says when they talk about being “raised in the arts,” it isn’t all about fun; it’s about the hard work, too. “You could never just sit back and watch other people do things.” She helped make costumes, helped backstage building, painting sets …

“I think that’s what my parents taught all us kids: you can follow your dreams, you can do what you want to do, but it’s not going to be easy. Art is not always the easy choice. It doesn’t always pay the bills.”

She says her dad “half-heartedly tried to talk each of us out of careers in the arts because he knew from experience that it was a financial struggle.” But, she says ultimately, her mom and dad were incredibly supportive of all the Henson children in whatever path they chose.

Robby says growing up at the theater “taught us to dream big and chase crazy careers.”

As far as his sister’s accomplishments, Robby says he’s most proud that Heather has “carved out an award-winning writing career in a very difficult profession, as an author and novelist, and was able to be published in multiple languages by some very esteemed publishers.”

Heather is equally as proud of her brother. “I’m always amazed at Robby’s ability to write a play very quickly,” she says — and not just a play, “but a darn good play.”

She’s proud of all the Kentucky Voices pieces the theater has produced that he’s written and co-written. “I’m also amazed at how he’s basically become so much like my dad in his ability to fix or rebuild anything. We have a postcard with a quote from Dad saying how he ‘would just put up a board and start nailing,’ and that’s basically Robby now.”

Heather says it’s definitely a struggle to keep a career going, along with running a 70-year-old-plus non-profit organization, “but Robby and I inherited a lot of energy from both our parents, so we’ll try to keep all the balls in the air as long as we can.”

She says their father would be proud. “ … and he’d also take credit. I think he’d say, ‘Hey, you two are a chip off the old block!’”

Heather is proud to share the honor with Robby.

“We’re definitely a team when it comes to the playhouse,” she says — each of them have their areas of strengths. They also disagree, but ultimately make it work together to keep the theater running. “I think we both have a determination — a stubbornness — to keep Dad’s dream of ‘Broadway in the Bluegrass’ alive and kicking against all the odds,” she says.

Robby says sure, the work they do with the playhouse is so time-consuming that “without a doubt, in the last seven years, it has restricted some of our commitment to our individual projects.” But he says keeping their family’s historic theater going is richly rewarding. “So, no complaints.”

The Arts Citizen of the Year Award, since its inception in 2004, has been given to Wilma Brown, Stuart Powell and Vince DiMartino, among others.

Musician Chase Miller to be featured at Lunch with…