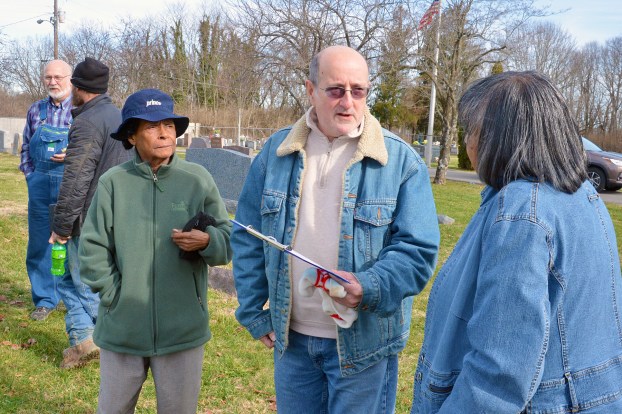 Emma Shannon, left, and Linda Warren listen as Mike Denis explains how he will get GPS coordinates for each grave at Hilldale Cemetery. (Photo by Robin Hart)

Hilldale Cemetery’s records and locations of graves are being corrected and updated by a group of volunteers who want to make a map of the African American cemetery as accurate as possible. 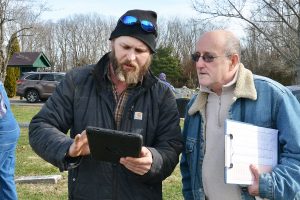 On Thursday, a couple members of the Central Kentucky African American Cemetery Association and a few other interested people met at Hilldale to figure out the best way to map the more than 4,000 graves. They also talked with the cemetery sexton, Jason Turner, who gave them suggestions on how the city would like to have the mapping done. For example, to list graves by sections and rows, instead of using a grid.

According to Mike Denis with the cemetery association, by having an accurate map of specific graves, people will be able to easily locate the grave of a family member.

A recent multi-year project completed by Bill and Beulah Cocanaugher Jones, of the Boyle County Genealogical and Historical Society, corrected and updated the Bellevue Cemetery records of more than 14,000 graves, Denis said.  “Now we will attempt to do the same for Hilldale.”

“As things now stand, the city only has records of about 1,500 burials. … So unless people know exactly where the graves of family members are located, they are, for all intents and purposes, lost, like a mis-shelved book in a library,” Denis said. 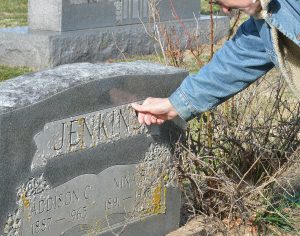 Mike Denis looks at a grave marker at Hilldale Cemetery. His personal goal is to find the GPS coordinates for every grave so that family members can easily find it. (Photo by Robin Hart)

“This volunteer effort by the Central Kentucky African American Cemetery Association members will (1) correct a grievous injustice in the handling and recording of the Hilldale records; (2) assist the city, at no cost, in updating and correcting Hilldale records; and (3) enable friends and relatives to locate family members’ graves in Hilldale.”

Denis said that most of the city’s records are inaccurate. “For example, for a period from about 1968 to 1971, the only records that were kept were the names of the deceased. Even those are often misspelled. There were no locations within the cemetery or no death dates, and dozens of them were listed as interred in 1971, even though we know many died in 1968. Someone just filled in the blanks the fastest and easiest way possible.”

Denis said the website findagrave.com shows about 3,850 burials in Hilldale, but that number often increases as more research and graves are located. 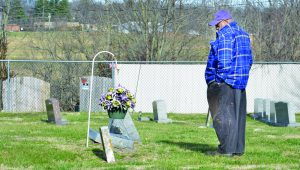 Charles Grey looks at a gravesite at Hilldale Cemetery on Thursday. (Photo by Robin Hart)

He said a special thanks goes to Charlotte McConaha of Parksville, who is a member of the Boyle County Genealogical and Historical Society, who photographed nearly all of the stones in Hilldale and added hundreds of memorials to the website. “I’m working closely with her to augment and correct the records on that website,” Denis said.

“I am in the process of combining the city records with the findagrave.com records, and my spreadsheet now lists over 4,000 names. However, that means that the city of Danville has ‘lost’ at least 2,500 individuals, and possibly hundreds more who were never recorded.” 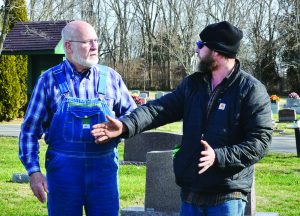 Sexton Jason Turner tells Bill Stocker how graves were at one time dug with a 36-inch center. Today, graves are spaced at 40-inch center.

Denis said his personal goal was to attach GPS coordinates for every gravestone, something he’s already done for the African American cemeteries at Shelby City and Meadow Lane. He is working on the same for Wilsonville Cemetery.

By using the combined city records and findagrave.com lists, Denis said the group will compile the names, and many times the birth and death dates of most everyone who is buried there. The list will never be complete, however, because there were many more burials at Hilldale than there are gravestones.

Bill Stocker is active in maintaining the African American cemeteries in Boyle County and said some of the grave markers are only rocks. “It’s sad that they lived here their whole life, and all they get is a rock.”

Charles Grey was also at the cemetery on Thursday and wants to have a part in making the cemetery records and mapping complete. “This is so, so necessary.”

Linda Warren and her cousin Emma Shannon were also at the cemetery Thursday afternoon and were interested in learning how the mapping process was going to be conducted. They both have family members buried at Hilldale.

Shannon said she has many fond memories of growing up in the Duncan Hill area. She graduated from Bate High School — but couldn’t recall the year — and “received the second-highest honors in my class,” she said. After listening closely to how Denis uses a GPS app on his phone to create coordinates for each grave, Shannon said it’s always good to learn something new.

As a young girl, she and her family lived near Hilldale Cemetery. “It has a special place in my heart.”

She recalled that the caretaker was a man named Jay McBeth, who also lived nearby, but he was elderly and sometimes needed help. On days when the neighborhood kids were out of school and a funeral was coming in, McBeth hitched his horse, Tom, to a wagon and made his way into the cemetery, Shannon said. The kids would run up and help him dig the grave, or anything else he needed done, Shannon said. Then they’d just “hang out.”

“This was just my territory.”