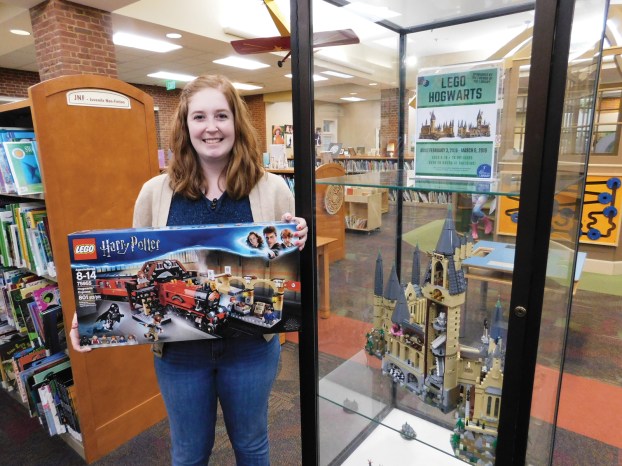 Youth Services Librarian Kinsey Hisle is excited to once again offer a Harry Potter-inspired LEGO build set to kids in the Children's Library of the Boyle County Public Library. She says building a LEGO set with others uses STEM engineering skills while also giving builders a chance to work as a team and meet new friends who share their interests. (Photo submitted)

Another Hogwarts LEGO build comes to the library

The ever-popular Harry Potter book series has been inspiring readers of all ages for more than 20 years. Last year, thanks to a generous donation from the Friends of the Library, tweens and teens were able to build the 6,000-piece LEGO Hogwarts Castle. The completed castle is on display in the Children’s Library of the Boyle County Public Library.

Due to the success of the castle build, the library wanted to offer another group building project. The Friends of the Library once again graciously offered to purchase the new LEGO set. During the month of January, youth patrons of the library will be able to build LEGO Hogwarts Express train set.

Youth Services Librarian Kinsey Hisle coordinates the LEGO building projects at the library. “We choose LEGO Hogwarts Express to build this winter as a follow up to the very successful Hogwarts Castle the tweens and teens built last year,” says Hisle. “We asked on our Facebook page which Harry Potter-themed LEGO set people would want to build next, and the Hogwarts Express was by far the most popular choice.”

LEGO Hogwarts Express has over 800 pieces, making it an ambitious project that many kids probably wouldn’t get the chance to build individually, due to the higher price associated with the larger LEGO sets. While the scope of the build is smaller than that of the castle, Hisle says that this set will require more detailed work with small pieces that she thinks the patrons will really enjoy.

“The kids last year were very excited to complete such a big set,” says Hisle. “I was impressed with how well the young patrons worked together and used problem solving skills when building together.” When problems arose, such as pieces being placed incorrectly, the young builders had to stop and figure out what went wrong so they could fix the problem.

Building a LEGO set with others uses STEM engineering skills while also giving builders a chance to work as a team and meet new friends who share their interests. Completing a large LEGO set takes patience, planning,and collaboration, all of which are useful skills to develop. As an added bonus, youth who participate in the build will be entered to win a 20th Anniversary edition of the Harry Potter series book of their choice.

The first building date is scheduled for 4:30 p.m. Monday, Jan. 13  in the Storytime Room at the library. All tweens (ages 9-13) are invited to help with the build. Those who are interested in building the train but are unable to attend on Monday can still participate in any of the other scheduled building dates. Pop-up building times may also occur throughout the month.

“The Harry Potter sets all invoke beloved themes from the popular book series, such as unity, imagination, and friendship, which makes them the perfect LEGO sets to construct together during this program series,” says Hisle. “Once completed, the train will be displayed along with the castle to inspire and entertain all library visitors.”