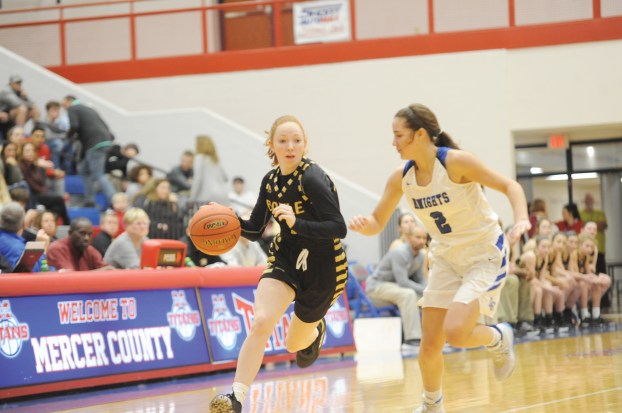 Coach Ryan Wiersma called senior guard Kelsea Hinkle the Rebels “unsung hero” because she does the things that don’t show up on the stat sheet to help her team win. (Photo Derek Brightwell)

Boyle County’s girls basketball team went into the second quarter of Friday night’s 2A Classic first round meeting with Lexington Catholic up 12-10. They went into the half down 29-21.

“We really responded in the locker room. We went in and made some small adjustments,” head coach Ryan Wiersma said after the Rebels were outscored 19-9 in the second quarter. “Defensively, we struggled because we were playing some different things with different lineups. We talked it over at halftime — we knew the offense would take care of itself once we settled in.”

They did settle in and the offense did take care of itself.

The Rebels outscored the Knights 37-16 in the second half on their way to a 58-45 victory to advance to the second round.

Wiersma changed up the starting lineup for Friday’s game — in part to motivate some of the players to step up their play but also to give credit to the players who were doing things to help the team that might not show up on the stat sheet.

One of those players is senior forward Madison Baker, and she reward her coach for the starting role Friday night.

“Madi Baker’s been huge for us the last three games. She came out and played a big role. She was really good for us tonight,” Wiersma said. “She had some big box outs, made the energy plays — took some charges for us in the second half.”

After the game, Wiersma praised his team’s effort on defense. Excluding the rough second quarter, the Rebels never gave up more than 10 points in a period. That’s something that he has been wanting to see from his team all year long.

“Our defensive pressure was what we expect from our girls.”

One play who stepped up in a big way on defense was senior guard Kelsea Hinkle. While Hinkle didn’t finish with any points — she only attempted one shot, a three pointer — she did get two assists and a steal and was a menace for the Knights in the passing lanes and on the ball.

“Keslea is the unsung hero of this team. She brings a lot of energy and leadership,” Wiersma said. “She doesn’t pout if she doesn’t score. She’s willing to do whatever it takes to help our team win. She knows that if she’s going to be great on defense and that’s what the team needs that’s what she’ll go out and try to do every single day.”

Another player who stepped up defensively was Keely Bowling. While the sharpshooter did lead the team in scoring with 18 and knocked down five three pointers, she also hauled in seven rebounds and had two steals.

“I’ve always said — I’ll put Keely up with the best shooters in the region,” Wiersma said. “It’s just sometimes you’ve got in a little bit of a rhythm and see the ball go in the net and feel good as a shooter. She hit that first one in the second half and everything just clicked for her again… Once Keely Bowling starts hitting shots, it opens the floor and helps everyone when they have to key in on her. She finally came out of her slump.

“More importantly, what she did on the defensive end,” he added. “She blocked out, went and got rebounds. She was very active and that’s what we need from her on top of her shooting.”

Emily Glasscock put in another big performance for the Rebels. She scored 10 points and nabbed 11 rebounds to earn a double-double. And while some double-doubles can be misleading, Glasscoock’s was not. The rebounds were hard fought and came at key moments and the points kept Boyle alive while it was attempting to mount its comeback.

“Emily is a warrior — there’s not much more you can say,” Wiesrma said. “She takes coaching. She really implemented everything we’ve worked with her on to be guard — she’s really a forward but she’s our back-up point guard — and then she goes out and gets 10 rebounds. It’s just a tribute to how she’s willing to battle and how she goes to work each day.”

Another encouraging sign for the first year coach was the play of Peyton Bugg — who scored 17 points, knocking down 9-11 from the free throw line and led the team with three assists.

“Peyton Bugg started to show back to the Peyton Bugg of old,” Wiersma said about the freshman. “She was aggressive. She wanted the ball in her hands. She made really good decisions — either found the open player or went and scored — that’s what we need from her.”

Saturday’s second round matchup is a tough one.

Mercer County is one of the top teams in the region and will look to speed up this Boyle team that’s still coming into its own under Wiersma, but he’s going to let his team enjoy Friday’s win before thinking about Saturday’s opponent.

One advantage Boyle might have is the play of senior center Alyssa Wray, who finished Friday’s game with 11 points and seven rebounds and two blocked shots.

Mercer is a team who looks to beat teams athletically, but can struggle against size — as evidenced in their loss to Bullitt East in the Patriot Classic a week ago. Wray has shown flashes of being a dominant inside presence, and Wiersma is looking to see that more consistently.

“When Alyssa is physical and wants the ball down there and plays big — most games when Alyssa scores in double figures, we win,” he said. “That’s no secret — their coaches know that. When she’s really involved on offense, that means they’re pressed out on defense and she’s finishing around the rim and it makes life easier for everybody.”

If nothing else, Friday’s win showed that Boyle County can answer a challenge and can fight back through adversity.

Mercer County tops Garrard to advance to 2A second round

In a 2A Sectional Tournament first round double header, Mercer County took both games over Garrard County to send its... read more