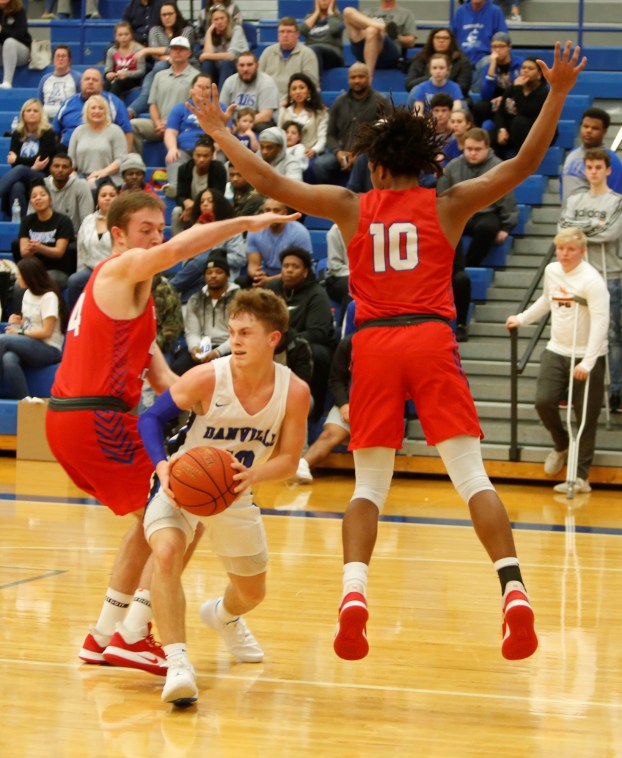 Aden Slone, center, of Danville pulls up as Lincoln County defenders Riley Bodner, left, and Jaxon Smith try to block his path to the basket during the third quarter of Danville’s 58-49 overtime victory Friday. Slone led the Admirals with 14 points. (Photo Mike Marsee)

The Danville boys answered the bell twice Friday night, and that was enough for one big district win.

The Admirals were the aggressor from the outset Friday against Lincoln County, which allowed them to take control of the game and keep it for most of the first half. And they were responded again when the referee threw the ball up once more for the start of an overtime period that Danville dominated to earn a 58-49 victory.

Host Danville scored the first five points of the extra period – and 11 of the first 13 – to secure the win after surviving Lincoln’s bid for a come-from-behind win in regulation.

Danville coach Ed McKinney said he couldn’t ask for much better play than the Admirals gave him in the first and fifth periods.

“You’ve got to play well to beat them,” Danville coach Ed McKinney said. “We’ve seen enough of these games. … You know they’re going to come back.”

Aden Slone scored 14 points and Darrian Bell added 13 to lead the Admirals, who won for the 11t time in their last 12 games.

They took control of the overtime period with their defense, forcing Lincoln turnovers on three of the Patriots’ first five possessions.

“I thought we were really active,” McKinney said. “We kept digging. Sometimes we let the guy turn the corner, but tonight we made the extra wall-up, we kept grinding to try to get our head in front of the ball and keep it in front of us. And when we do that our quickness can take over. We’re fairly quick, but you can’t just open your shoulder and get it driven down your throat.”

Jalen Dunn hit one free throw when he was fouled following a steal, Bell scored on a layup and Bell deflected a pass to Trey Dawson for a layup, and just like that Danville led 48-43 with 2:30 left in overtime.

The Admirals then prevailed in a free-throw shooting contest. They hit eight of 11 shots from the foul line over the balance of the game, while Lincoln went 4 for 7.

Neither team shot free throws well on the whole, however. Danville was 12 for 21, while Lincoln was 14 for 23.

What they did do well, McKinney said, was defend.

“For the most part, we were gritty defensively, but then so were they,” he said. “It’s just two teams that are trying to get a 45th District win, and both teams are going to play hard.”

They’ll try again Feb. 14 in the rematch at Lincoln, and perhaps they’ll meet once or twice more after that. The Admirals and Patriots split four games last season, with Lincoln winning in both the 45th District and 12th Region finals.

Slone hit three 3-point shots in the first 5:21 Friday to produce Danville’s first nine points, and Bell scored the final five points of the first period to give the Admirals a 14-8 lead.

Layups by Slone on consecutive trips late in the second quarter made it 24-12, and the Admirals took their largest lead at 30-17 about two minutes into the second half on a layup by Dante Hayden, who scored all nine of his points after halftime.

“It’s kind of a flip for us. We’ve been a little bit lackadaisical in the first half, and tonight we were really good right off the bat. Our effort was really good,” McKinney said.

Lincoln stopped the bleeding with a 3-pointer by Bryston Alcorn, and he and Riley Bodner combined for nine points in an 11-2 run that pulled the Patriots within 34-28 with 1:30 left in the third period.

Lincoln’s scoring leader, Jaxon Smith, was held to four points over the first three periods and seven overall, but he tied the game at 36-all with a steal and layup early in the fourth quarter. Bodner, who scored 12 points for the Patriots, hit an elbow jumper to tie the game at 42-all with 2:20 left after Danville had regained a five-point lead.

Danville’s Bell and Lincoln’s Smith each hit one of two free throws to leave the teams locked at 43. After Smith missed his second shot with 10 seconds left, Lincoln’s Elijah Frye rebounded the ball but turned it over, and Bell got off a heave from about 55 feet that just missed at the buzzer.

Frye led Lincoln with 15 points, while Bodner had 12 points and nine rebounds.