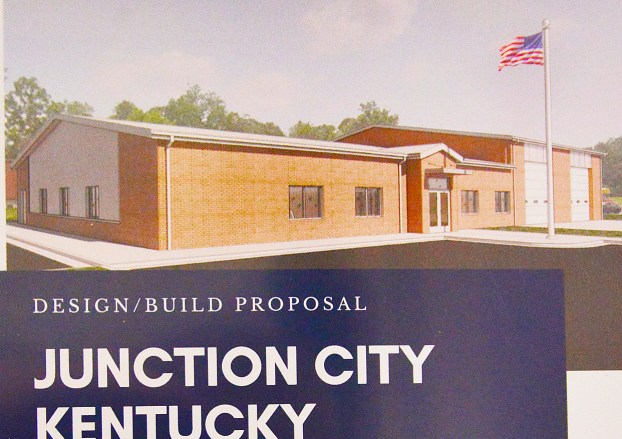 The design of Junction City's planned municipal building will be similar to the one shown here on the cover of Marillia's project proposal, according to Mayor Jim Douglas. (File photo by Robin Hart)

Even though Junction City awarded the bid to a Lexington construction company to build its new municipal building last month, the mayor said he’s not ready to sign the contract.

Junction City Mayor Jim Douglas said he’s “not interested” in signing the 30- to 40-page contract with Marrillia Construction out of Lexington, “until it’s condensed — a lot.”

Speaking to the council Thursday night, Douglas said he didn’t like the language in the contract. “The way the contract is written, they can pretty much do whatever they want to an we might not be able to do nothing.”

By next month’s meeting, Douglas told the council, “I’ll give you the condensed (version) by a bunch, that’s easier to understand.”

Douglas said not signing the contract just yet won’t hold up the actual construction of the project. While the contract is being negotiated, the bond process to finance the project has begun and architectural drawings will need to be completed.

“The first thing is to get the drawings from the architect, Douglas said.

“I thought we had those,” said council member Vicki Bowling.

“No,” Douglas answered. “It will take a lot of time for architects to draw and get it approved. It will be a while.”

He explained it could take a month or more to get the drawings and plans, then the council will need to discuss any changes they want to make.

“What were the drawings that we saw (last month)? Bowling asked.

“That was just a preliminary sketch. That’s all it is. There will be a complete set of work drawings before we start.”

After the meeting, City Attorney Jeff Jones said what the council did last month was to agree to accept Marilla’s bid and set the bond process in motion to get the money to finance the project.

“But now we’ve got the contract from the builder and they’re saying we need to sign this,” Jones said. However, he, the mayor and another attorney who read over the contract don’t agree with the language.

“I think there were some costs outside of what they had told us initially, that we don’t know what are. … We’re not going to agree to pay for something that wasn’t in the bid to start out with, and it seems like there’s some of that in there,” Jones said.

Douglas said they may want to add more brick and stone on the facade, but it will depend on the cost.

“It’s not going to be an all metal building. We’re trying to make it look (more) respectable than just an old metal building,” he said.

Jones said, “That’s where we’re at, basically negotiating the terms of the contract.”

Douglas said, “It’s nothing that can’t be ironed out.”

In other city business, the council approved to pay $11,864 to Air Evac Lifeteam for a year contract to cover every resident within the city limits. It’s the third year for the coverage. Douglas said, “We’ve used it. I know it works because it’s been tested.” He said the city council wants to “give a little back,” to the community and not just take money.

The council also considered who to appoint to represent Junction City on the Planning and Zoning Commission to fulfill the remaining term of Sonya Kitchen, who has resigned due to health issues.

Hilldale Cemetery’s records and locations of graves are being corrected and updated by a group of volunteers who want to... read more