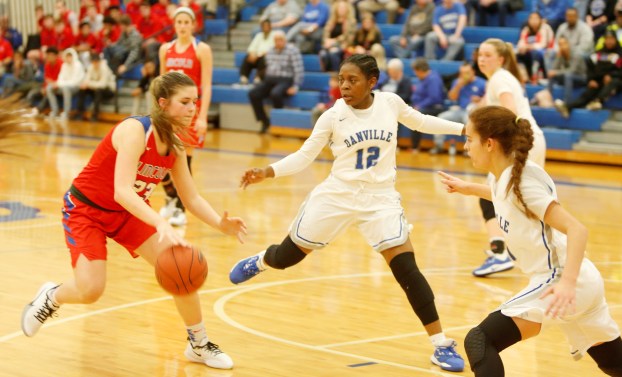 Tyliah Bradshaw (12) and Ahyana Burnett of Danville work to keep Lincoln County’s Talynne Shearer out of the lane during the third quarter of Danville’s 65-40 victory Friday. (Photo Mike Marsee)

Two of their top players were out of action, but the Danville girls were still able to pick up two big district wins.

The Lady Admirals made it through an important week unscathed after routing Lincoln County 65-40 on Friday night to complete a sweep of their first two 45th District games.

They were missing two players who account for almost 23 points per game, but they defeated Boyle and Lincoln counties by a combined total of 37 points to take the early lead in the district standings.

Four Danville girls scored in double figures and the host Lady Admirals dominated the boards as they matched their largest margin of victory this season. They did so without second-leading scorer Lara Akers, who was sidelined by an ankle injury, and third-leading scorer and top rebounder Camryn Preston, who is recovering from an appendectomy.

“We needed to get through these two games, and other kids stepped up,” Danville coach Judie Mason said. “It didn’t look pretty – you could see our rotation where it isn’t the same – but they played hard and made up for their mental mistakes.”

Danville (10-5, 2-0 district) overcame 23 turnovers to defeat Lincoln (7-8, 0-1), which stayed close in the first half thanks to its defense but ultimately paid for poor shooting.

Jenna Akers scored 17 points and Desiree Tandy and Madison Terrell each had double-doubles, and Mason said they were the key players for Danville. However, she also said players such as Samantha Bottom and Haley Price-Hancock also made important contributions as they saw their minutes increase.

The Lady Admirals opened a double-digit lead early in the second quarter and broke the game open late in the third quarter and early in the fourth. They outscored the Lady Patriots 15-5 over a span of about six minutes to take a 54-35 lead.

“I thought our defensive effort in the first half was good. We had a lot of deflections, a lot of steals – we had 10 steals at halftime – and our defensive intensity dropped in the second half,” Lincoln coach Cassandra McWhorter said. “But credit to Danville, they finished at the rim and made some big plays. Everything gets a little bit better when the ball goes in the hole.”

Danville shot 49 percent (26 for 53) from the field, while Lincoln struggled to make shots from all points on the floor. The Lady Patriots shot just 33 percent (16 for 49) from the field and were 1 for 15 from 3-point range and 7 for 18 at the free-throw line.

Danville cleaned up most of the missed shots, outrebounding Lincoln 42-20. The Lady Admirals also made hay on the offensive glass with 15 offensive rebounds, including five by Terrell.

Mason said she was particularly pleased with the play of Terrell, who has seen her minutes increase this week.

“That’s probably the best Madison has played, and you probably wouldn’t know it, and you wouldn’t know it because I was chewing on her the whole game,” Mason said. “Madison is one those players who works her butt off every single day, and I was glad to see her get rewarded for it.”

Jenna Akers kick-started the Lady Admirals with seven first-quarter points, scoring the first four for her team and closing the first period with a 3-point goal.

“Jenna really stepped up big in the first quarter, and that gave us momentum and let everybody else relax,” Mason said.

Both Preston and Lara Akers are expected to return next week.

Rebels looking to learn from tough loss to Lex Cath

“Not much more you can say about it. Good old fashioned butt-whooping was that was.” That’s what Boyle County coach... read more