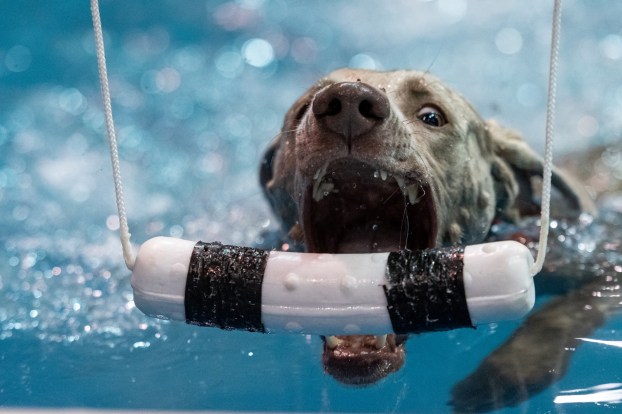 Grayson, a 4-year-old Weimaraner, competes in the 2019 DockDog World Championships in Dubuque, Iowa in October. (Photo by KJ Photography, submitted by Taylor Bottom)

Four-year-old Grayson lives in Perryville with his family, Taylor and Erika Bottom, and is ranked 23rd in the world in a sporting event. He also has two nationally-known corporate sponsors, one of which is now being carried locally at Burkmann Nutrition.

Grayson is a Weimaraner and competes in “DockDog” events around the nation. It’s a sport where all sorts of breeds and ages of dogs jump off a dock and into a body of water, and are judged on the height, distance and speed with which they retrieve a toy.

Taylor Bottom, who is also a Boyle County Sheriff Deputy, his wife Erika and Grayson make up Team Gray Ghost. But recently, N-Gage, a new company that makes and sells toys for dogs and their owners to play with together, has added them to Team N-Gage too.

Bottom said they don’t receive payment from N-Gage, but they are supplied with lots of toys, hats, shirts and a special “superfly suit,” which is a Neoprene vest for Grayson to wear with the N-Gage logo on the sides. 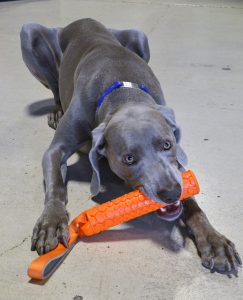 Even though N-Gage has given Grayson several toys to play with, Bottom said he’s keeping them away from Grayson until competitions. The dogs are all “toy driven,” Bottom said. So if Grayson chews on the squeeky “bumper” toy every day, it’s not special anymore. Bottom said he wants to make sure Grayson really, really wants to jump high and far to get at that toy.

Because Grayson is sort of a local celebrity and Sportmix Caninex Dog Food, which is another sponsor for Team Gray Ghost and is sold at  Burkmann, the business is now selling the N-Gage brand of toys too. The business has set up a special display with a variety of toys and features a signed photo of Taylor Bottom and Grayson getting ready to compete. 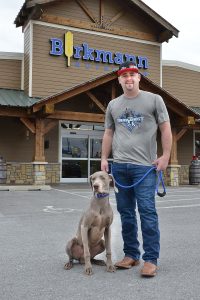 “We are always on the lookout for new products that we feel our customers and their pets may enjoy. When we saw that Taylor and Grayson were using N-Gage toys we decided to check them out,” said Kasey Gordon, marketing and media specialist for Burkmann Nutrition,

“It’s local people who own it, (Burkmann)” Bottom said. “It’s cool how they opened up their arms to us. They love the community and they love animals.”

Even though Junction City awarded the bid to a Lexington construction company to build its new municipal building last month,... read more