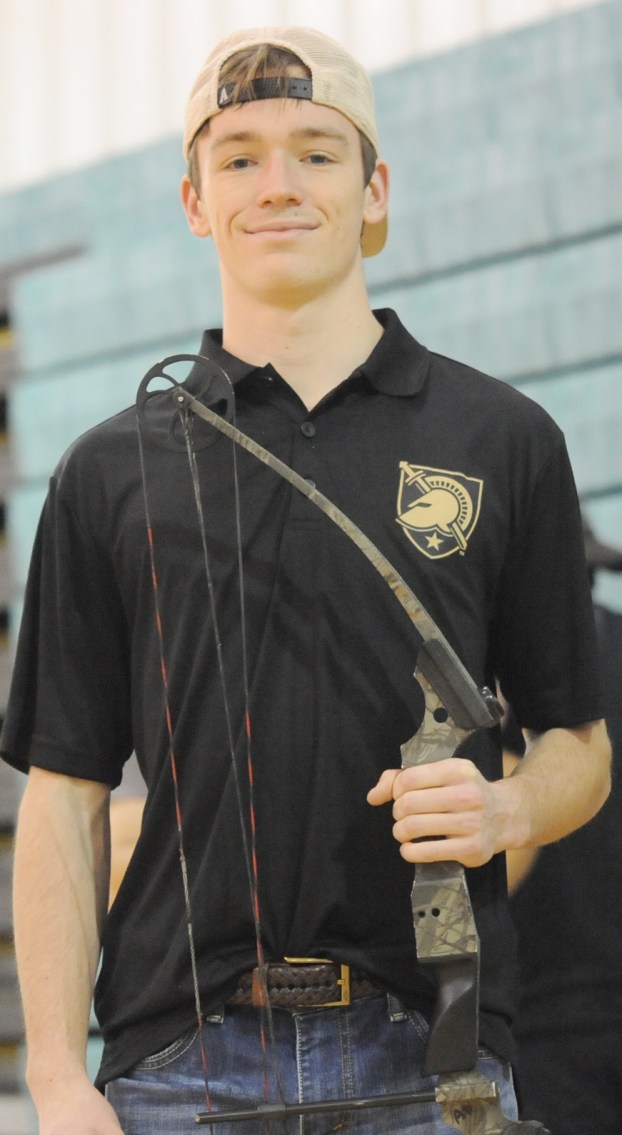 Alex Patton's first love is football, but he's taken to archery in his first year. Next year, he plans on attending one of the three prestigious military academies in the US. (Photo Derek Brightwell)

Now, as he approaches his graduation, he knows that it’s his time to serve the country.

“My family’s had a military background. Growing up, I’ve always known the sacrifices they’ve made and honor and all that they’ve put into the country,” he said. “I feel like it’s my duty to kind of carry that on. With my leadership abilities, I should put that to work at one of the academies.”

And he’s already cleared one of the major hurdles in getting accepted into those academies. Representative Bret Guthrie of Kentucky’s second congressional district has given Patton three nominations — one for West Point, the Naval Academy and the Air Force Academy.

“It’s massive. That’s basically the hardest thing to get through the whole admissions process — the congressional nomination,” Patton said about the nomination. “To get that, you know that you have a really good shot. Especially getting three recommendations from the same guy — it means you’re pretty high up in terms of priority in terms of getting admitted into the academy.”

While Patton said that his personal preference would be to attend West Point and join the Army, he’d be happy in any of the three branches.

Patton said that his family’s history of military service has greatly shaped the person that he is today, and he’s grateful for the lessons that it’s taught him throughout his childhood.

“It shapes how we do everything,” he said. “We have that order and that discipline. They passed that down and they raised us right.”

During his time at Boyle County, Patton primarily played football. In his senior year, he decided to give archery a try, and found that he had the skills to excel in the sport during his first year.

“I think I’ve been doing great as a first year shooter,” he said. “My first tournament, I shot a 271 out of 300. Our best shooter shot a 278 or something around that. It’s a friendly competition, but I’m definitely trying to pass him up.

“My friends have talked about me joining. I figured what the heck, I’d give it a shot,” he added about what led him to the sport in his senior year. “My family are hunters and my uncle does bow hunting. So I figured maybe I’d have a natural talent for this and turns out I did.”

He also plays rec league basketball, but considers himself just an “average” player who just is out there to have fun.

“That’s just with my friends and finding a way to spend my time,” he said. “It helps me work on improving myself.”

But his favorite sport is his first — football. He’s played it for 11 years. “State was probably the last game I’m ever going to play. It’s been a really good run and it’s taught me a lot.

“I won’t miss the practices obviously,” he said laughing. “The grind is the grind. I’m going to miss the people and those bittersweet moments.”

And as he enters the last half of his high school academic career, Patton has some pretty basic — but solid — advice for the kids who are coming up on the end of their first year, or about to embark on their own academic career.

“Just do your work. That’s all you have to do to pass your classes…  Just pay attention. As long as your paying attention and have a good work ethic, you’ll be fine.”

Two of their top players were out of action, but the Danville girls were still able to pick up two... read more