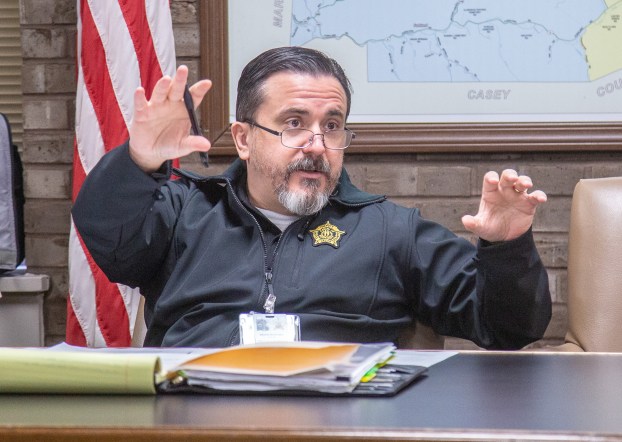 Boyle County Jailer Brian Wofford announced he was taking himself off the committee because of his concerns of liability issues since the agreement didn’t follow Kentucky statutes. (File photo)

Boyle jail will get HIV meds at no cost

The Boyle County Detention Center stands to save as much as $125,000 every year on HIV/AIDS medication costs, thanks to a recent policy change by the federal government.

That change could have a significant impact on the jail’s budget, because it costs around $3,000 a month for the medications. The jail averages having around two inmates at a time with HIV/AIDS, but others may be incarcerated for shorter times here and there throughout the year. The total cost can wind up between $100,000 and $125,000 every year, Wofford said.

The funding that will cover those costs was made possible thanks to a policy change created by the U.S. Health Resources and Services Agency (HRSA) near the end of 2018, according to Tisha Johnson, the HIV/AIDS Medical Director at the Kentucky Department for Public Health.

Previously, federal funds from the Ryan White HIV/AIDS Program were available to help many low-income people around the country afford their medications and costs associated with taking them, such as transportation. But the funds were not allowed to be spent on people who were incarcerated, Johnson explained. Then, on Nov. 30, 2018, HRSA clarified its policy to allow funding to be spent on people with HIV/AIDS who were incarcerated, she said. The clarification was made because administrators realized local jails did not have the money in their budgets to afford expensive medications, she said.

This past summer, the Kentucky Department for Public Health HIV Services program released its own policy change allowing jails to access the funding. There are currently 17 jails across Kentucky that are now participating, Johnson said.

Making sure everyone with HIV/AIDS is taking their medication is important because it helps prevent the disease from spreading further, she said. And Kentucky is one of seven states targeted for additional funding to help end the HIV/AIDS epidemic.

“This will be an important step in helping to end this epidemic,” she said.

Wofford said when he applied for the program, he was told it could take 30 days to find out, but approval came through much faster, in less than a week.

The savings could total around half a million dollars after four years, he said.

Ryan White was diagnosed with AIDS at the age of 13 after a blood transfusion, according to the Health Resources and Services Administration. White fought “AIDS-related discrimination” when he wanted to return to school; he died in 1990, months before the legislation bearing his name passed Congress, according to HRSA.

Today, HRSA says more than half of the people living with diagnosed HIV in the U.S. receive services through the Ryan White Program, which was funded with $2.34 billion in fiscal year 2018.

Part B of the Ryan White Program gives money to states “to improve the quality, availability and organization of HIV health care and support services,” according to HRSA.