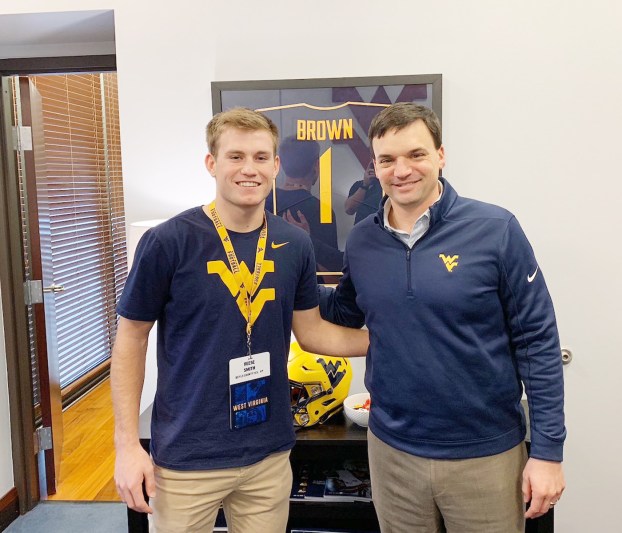 Brown views Smith as player ‘to build around’

Coach Neal Brown was pleased with West Virginia’s recent football signing class but hopes to “build the roster with four to six slots” still open. However, don’t doubt how pleased he is to have added Boyle County standout Reese Smith to the West Virginia roster.

Smith caught 202 passes for 4,393 yards and 64 touchdowns during his four-year prep career. He finished with 71 total touchdowns and 5,386 all-purpose yards along with a school record 26 interceptions, eight caused fumbles and 141 solo tackles.

“Reese is the kind of guy that we want to build around,” Brown, a former Boyle County all-state receiver, said. “Who he is as player matches what we need. He is a winner. Won huge in his four years at Boyle.

“He understands what it takes to get there, leadership and work. He’s a very knowledgeable play and could really play either either side of the ball for us. We are going to play him at slot but he’s talented enough to play safety.

“There’s just a toughness about him. He plays with an edge. I like that and we need more of that.”

Smith finished his high school degree in December and is now at West Virginia where he can go through winter workouts and spring practice.

“He knows the opportunity here and we are glad to have him,” Brown said.

Smith will have a new receivers coach as Brown just hired Gerard Parker, a receiver at UK the same time Brown played there, as offensive coordinator/receivers coach. Parker was at Penn State last year and has also been an assistant coach at Duke, Purdue, Marshall and Tennessee-Martin.

Brown hopes to recruit more in Kentucky with his coaching connections and Parker, an eastern Kentucky native, has ties to the Bluegrass as well as other areas Brown hopes to expand West Virginia’s recruiting base.

“Recruiting Kentucky more just makes sense. It’s a border state and my name recognition is good there. I know a lot of high school coaches. I hope we can come in and sign a few good players each year like we did this year with Reese,” Brown said.

Brown was offensive coordinator at Kentucky in 2013-14 — Mark Stoops’ first two years as UK’s head coach — before leaving to become head coach at Troy. He made the move to West Virginia a year ago and his first team went 5-7. Brown felt the Mountaineers improved during the season but was “not pleased with our final record because that is not good enough” for West Virginia. However, he had one of the youngest overall rosters in college football and had the lowest returning production of any Power-5 team.

“From a recruiting standpoint, they are finding great matches for what they want to do. Look at Kentucky’s SEC record and that speaks volumes for the job Mark has done. As somebody who played in the program and being from the state, I am glad that the Kentucky fans are embracing him and understand just how good a job Mark is doing.”

Recently UK recruiting coordinator Vince Marrow asked about Brown and said he better not try to come into Kentucky and “steal” more recruits from UK.

“But I know what a great coach Neal is. That guy does things the right ways and we have to watch him now,” Marrow laughed and said.

“Big Dog (Vince Marrow) continues to do a really good job recruiting. His home state of Ohio is his base but he’s everywhere,” Brown said. “When he wants a player, its hard to beat him but we are going to try with some players.”

Mercer overpowers Boyle in 2A Classic

After completing an impressive comeback against Lexington Catholic on Friday night, Boyle County had another tough challenge ahead of them... read more