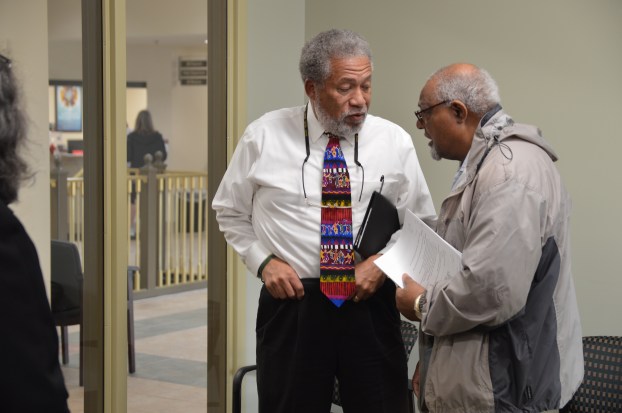 Danville Board of Ethics clears commissioner after complaint

The Danville Board of Ethics determined Friday that evidence presented in a complaint about a city commissioner’s violation of the city’s ethics policy was not sufficient enough. And that commissioner — J.H. Atkins — said he took the complaint as an attack on his integrity.

Resident Angela Allen filed the complaint against Atkins in December, based a section of the Danville Ethics Ordinance concerning “personal honesty and integrity.” Allen claimed that Atkins should have recused himself from a Dec. 9 vote, when the commission unanimously approved adding an additional sign for the Great American Dollhouse Museum on the city’s Master Wayfinding Plan, at an estimated additional cost of $5,000.

Allen’s complaint alleges that Atkins is listed on the Dollhouse Museum’s web site as an advisor to the business, and he should have “admitted/been forthcoming about this relationship to that business.” Allen’s complaint claimed it’s “inappropriate and unethical” for Atkins to have voted on the additional sign, and it showed “preferential treatment to one small business owner … as a result of his personal relationship.”

Friday, Allen added that Atkins should have disclosed his relationship “while the matter of funding to benefit the business was considered.” She said the worst-case scenario is that “the city commission used taxpayer dollars to benefit a private entity with whom he had a documented, outside relationship with, and the best-case scenario is that his actions called into question the integrity of our local government in general, and our city commission, in particular.”

She said neither of these situations are acceptable, and that’s why she submitted the complaint. “It’s not personal,” Allen said, after reading her statement. “I like everybody up on the commission.”

After Atkins was sworn in, he read a prepared statement about the allegation, but first said he “liked the way (Allen) said don’t take this personally, but I refuse to not take it personally because to me, it’s an attack upon my own integrity. So I’ll just read my statement …”

He said when he ran for city commission 10 years ago, he realized he would be holding himself to a higher level of public scrutiny, and that this case is an example of that.

Atkins pointed out that the wayfinding plan has been an ongoing community project for the last two years, and explained how four unique Danville attractions were highlighted during public input meetings held over that timeframe, involving business members, agencies and citizens. Those are the Perryville Battlefield State Historic Site, Wilderness Trail Distillery, Pioneer Playhouse and the Dollhouse Museum.

He said when the plan was revealed by the consultants hired, “it became very clear to several of us on the commission that a little ‘tweaking’ to the plan was needed so that the four would be represented equally” within a certain sector of sign locations.

“After a lot of meetings and debates, city staff, at the most recent meeting, recommended the addition of one more sign (for the museum) in an attempt to bring about a level playing field for those unique attractions.” The commission voted 5-0 to approve the new sign.

“So today, after two years of my participation in the deliberating and voting several times for the wayfinding project, comes the question of whether or not I should have recused myself from this vote — a question of my personal honesty and integrity, a question of my preferential treatment.”

Atkins explained that his relationship to the museum consisted of his assistance on researching several projects, such as those displays related to African American history. While he was a professor at Centre College, he led field trips, which included ones to the Dollhouse Museum, among local places.

Atkins said the advisor activities he listed were from at least 5-7 years ago, and took place while he was director of diversity and associate professor of the college. He said he’s never received any payments or gifts from the museum, or reviewed any financial records, and that he’s never accepted any payment for any of his community involvements, other than paid positions with Danville Schools, Centre and the city.

Atkins added that he takes his work as city commissioner very seriously, and that “FYI, I filed again in December to run for a sixth term.” He said the museum is one of the most “diverse and unique treasures” in the community, and he planned to continue to promote it whenever he could.

Lori Kagen-Moore, owner and operator of the Dollhouse Museum, was present and said she had asked Atkins to “join the museum team” before he ran for his commission seat. She said he was generous in “lending the museum his good name and image on the museum website,” and has “no responsibility for its well-being, and does not participate in any museum business decision-making.”

Board member Bill Carter asked Allen if she was present at the city commission meeting when the vote was taken; she said she was not. After asking for a brief overview of the discussions held during that meeting, and some input from other board members, Carter made a recommendation that “those of us that are concerned … about all the issues in this community, that we go and attend these city commission meetings, make our positions known.”

Allen said she “didn’t realize these discussions were going on sooner,” and had just noticed Atkins was listed on the website as an advisor. She added that she does website work for a living, and that “when we put people on the team page, we take them off when they’re no longer involved.”

The board went into executive session for about 30 minutes before announcing its decision that the evidence against Atkins was not sufficient enough to establish a “minimal factual basis” to violate the city’s ethics ordinance. The vote was unanimous from board members Carter, Liz Erwin, James Hunn, Sara Berry and David Blackburn.

After the meeting, Atkins said he considers himself very approachable and welcomes any citizen who has any questions about any of his community involvements or work with the city commission.

“I’ve never had any ill dealings with Ms. Allen; I think she’s a former student … That’s why I was confused — is this about me, or the Dollhouse …” he said.

Atkins said he agreed with Carter, and hopes that in the future, if anyone has any question about a vote he casts, he invites them to communicate with him or the city commission directly.

When contacted for comment, Allen said, “I do not have now, nor have I ever had anything but the utmost respect for Mr. Atkins. He taught where I went to school and we have always been friendly. I regret that he feels this was personal.”

She hopes that “all of our local representatives will carefully consider any relationships they have had in the past … that they have in the present or what they know they will have in the near future with someone benefitting from a vote … by a governing body where they reside.”

Allen says she stands by her opinion that Atkins’ past dealings with the museum should be considered a conflict.

Wind does damage across Boyle County

Strong winds that blasted through Boyle County this past weekend caused several trees to be uprooted and power lines to... read more