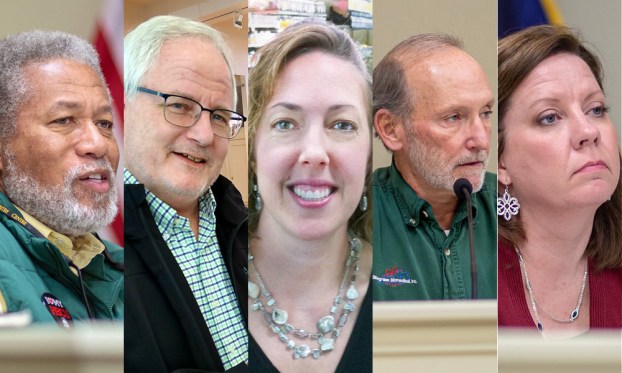 Five candidates have filed to run for the four seats on Danville City Commission.

The four incumbents, J.H. Atkins, Kevin Caudill, Rick Serres and Denise Terry have filed for re-election. Jeannette “Jennie” Hollon is hoping to take one of their seats in November’s general election.

A common thread tying the four incumbents together is that they all want to keep continuity within the commission as the city welcomes a new city manager and fire chief; and begins construction of the new Danville Fire Department headquarters.

Atkins said he thinks the commission has “worked very well together for the the last five years.” And the commissioners still have ongoing projects they want to see completed, such as deciding what to do with the recently purchased fairgrounds, in addition to the construction of the fire station and working with a new city manager.

“We need to have continuity,” he said.

Atkins said he doesn’t have a personal agenda, “I just want to do what’s best for the community. I’m devoted to being a public servant and not a politician.”

Serres said he agrees that the current commission “is a good team that works well together. … It’s good to keep a good, solid team together.” With new city leaders coming on board next month, including a human resource director in addition to the city manager and fire chief, Serres said, “Hopefully we’ll keep this team together.”

He also wants to continue having an active part in the Parks and Recreation Department, which the city will now be overseeing. It’s a project in which he’s very interested and involved in, Serres said.

With a fifth person running for a seat on the commission, “We don’t get to skate into our job, but it’s good to have the interest,” Serres said.

Terry said she was running for re-election because, “I think we are at a pivotal point in the City of Danville.” With all of the new personnel and projects in the works, “I think that a cohesive and experienced commission will be important to get us through this.”

If the four incumbents are re-elected, they’ll be able to be a part of the new fire station from conception to construction, she said.

Terry said she’s also excited to see how the Parks and Rec department will offer more opportunities and expanded programs for the young people and kids in the community. She said she foresees more kids will “come back to the Parks and Rec system” and compete at levels comparable to traveling sports teams.

Hollon is new to the political arena, but has wanted to run for office for quite some time, she said. She has owned the health food business, Danville Nutrition Center since 1999 and has lived in Danville for 27 years.

She took a break for three years and worked at the Planning and Zoning office where she learned what exactly the city commission does for the community, Hollon said. Being a wife and mom to children ranging in age from elementary school to college, and as a business owner, Hollon said she can be a “voice for a big group of people.”

She is interested in “investing in our youth” through the Parks and Rec Department and programs that it will offer, she said.

Hollon said she also wants to help mend the city and county governments’ divisiveness to reach common goals “and put personal feelings aside.”

Hollon has worked with and talked with small business owners and industry and government leaders and she wants to be a part of keeping them “solid and profitable”.

Hollon has seen the city spend tens of thousands of dollars on studies to help improve the community, which she agrees is sometimes necessary. However, she thinks there are a lot of local resources and organizations available that could have used their findings to come up with solutions for the city.

“I want to see more accountability of how the taxpayer’s money was spent,” Hollon said. And, she wants to see what changes have been made based on the past studies that the city has spent $40,000 to $50,000 on.

Caudill could not be reached for comment before the press deadline.

Danville Board of Ethics clears commissioner after complaint

The Danville Board of Ethics determined Friday that evidence presented in a complaint about a city commissioner’s violation of the... read more