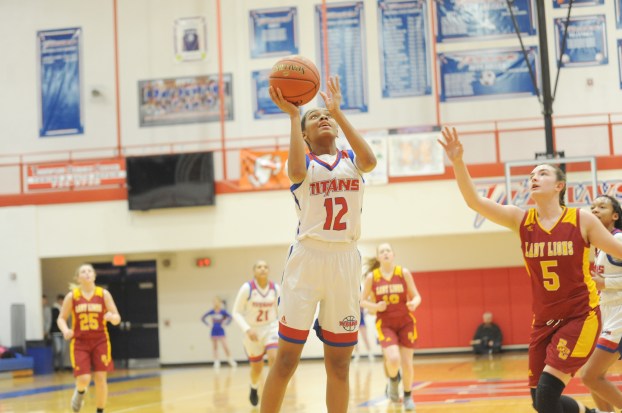 Mercer overpowers Boyle in 2A Classic

After completing an impressive comeback against Lexington Catholic on Friday night, Boyle County had another tough challenge ahead of them in the second round of the 2A Classic — host Mercer County.

And the Titans proved to be too much for the Lady Rebels.

Freshman Timberlynn Yeast led all scorers with 21 points to give Mercer a 74-42 win over Ryan Wiersma’s squad.

Mercer senior Channing Lewis was game’s second leading scorer with 15, while Boyle senior Keely Bowling knocked down three shots from beyond the arc en route to a team-high 13 points.

Love Mays and Anna Kate Drakeford each had 12 points for Mercer, with Mays knocking down all four of her free throw attempts.

Yeast and Lewis also led the game in rebounds with nine and eight, respectively.

Yeast shot lights out for Mercer — scoring at a 70 percent rate from the field, and only missing of her eight free throw attempts.

Boyle knew it was going to need a big night from senior center Alyssa Wray, and did get a good game from her — nine points on 4-5 shooting and three rebounds. But Mercer was able to lock down the Rebels second leading scorer, Peyton Bugg — holding her scoreless on nine shot attempts on the night.

Mercer County has been one of the top teams in the loaded 12th Region all year long, and Saturday’s win improves its record to 12-4. On Friday, Mercer handled a fiery Garrard County squad — winning 88-64 — to advance to Saturday’s matchup.

Boyle County is still looking to develop some consistency in Wiersma’s first season on the sidelines. The Rebels had one three straight before falling to crosstown rivals Danville on Tuesday. That was the only time they had won consecutive games all year.

Mercer will continue its run for the 2A State Championship with a meeting with Rowan County in Owensboro’s Sportscenter. They’ll tip off at 3:00 p.m. on Friday, Jan. 17.

Boyle’s 2A run is over, but they’ll be in action on Friday as well, playing the first half of a district double header against Lincoln County. Tipoff for that game is at 6:00 p.m.

The Danville boys answered the bell twice Friday night, and that was enough for one big district win. The Admirals... read more