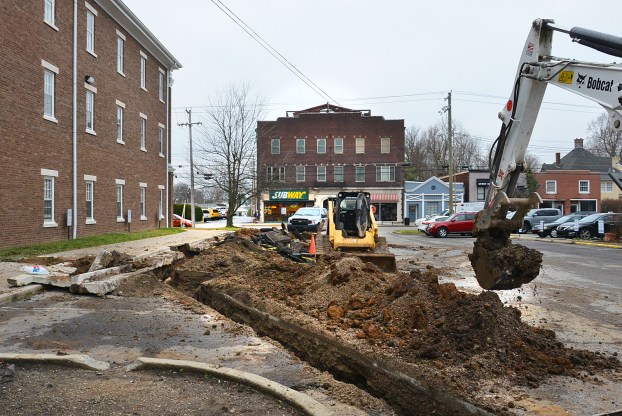 Workers have been digging up a leaking water line next to the Boyle County Court House since Friday. On Monday morning, a new waterline was being installed. (Photo by Robin Hart)

On Monday morning, the Boyle County Courthouse was without water, but the district and family  courtrooms kept the doors open for full dockets, according to Boyle County Emergency Management Director Mike Wilder.

County Sheriff Derek Robbins said his office closed at noon because of the inconvenience of not having restrooms available for his staff and no drinking water on hand.

By afternoon, four portable toilets were set up outside the courthouse for employees and those going to court, and bottled water was delivered. Also, the Boyle County Public Library “was gracious enough” to let employees use their facilities, Wilder said. And since the parking lot was not usable for courthouse staff or the public, Stith Funeral Home agreed to open their parking spaces for the courthouse’s use, he added.

Wilder said the extensive digging along the courthouse parking lot began on Friday as crews searched for a water leak. Digging caused another rupture to a line over the weekend, so they decided to replace several yards of water and sewer lines on Monday, he said.

By Monday afternoon, the sewer line was up and running.

Today (Tuesday), water will have to be shut off once again for a short time as the new water line is replaced, Wilder said.

“It’s been inconvenient, but it worked out.”

Law enforcement agencies have been posting incident reports about drug arrests on social media for some time now. Most of... read more