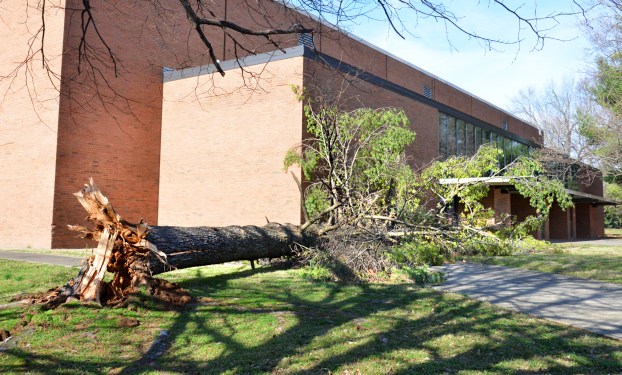 A pine tree about 50 feet tall was pushed over by strong winds on the Danville High School campus near the rear entrance of the gymnasium on Proctor Street. (Photo by Robin Hart)

Wind does damage across Boyle County

Strong winds that blasted through Boyle County this past weekend caused several trees to be uprooted and power lines to fall. They also blew down most of the split rail fencing at Perryville Battlefield State Historic Site.

Monday afternoon, a call for volunteers was sent out by the organization, Friends of Perryville Battlefield State Historic Site, to help to restore the fencing.

There’s probably about 2,000 feet of fencing that needs to be re-stacked, said Sarah Preston, secretary for the organization. The posts aren’t set in concrete and the rails are stacked as they were during the Civil War era.

No experience is necessary to rebuild the fencing and special tools are not required, she said. They just need people to bring work gloves and lift the lumber to put the fences back in order. “It’s really hands on,” Preston said.

Those helping rebuild the fences are meeting at the Civil War Hall, across from the Perryville Battlefield Museum, at the park at 4 p.m. every afternoon this week, or until the task is completed, Preston said. They may even have to have a full workday on Saturday to finish the repair work.

Several cedar trees were also knocked down, but they will be hauled off later and stored to be used and the next Civil War battle reenactment, Preston said.

On Saturday, wind gusts were measured up to 50 mph, said Emergency Management Services Director Mike Wilder. Trees were knocked down and utility poles were damaged, but no reports of home damage or personal injury were made, he said. 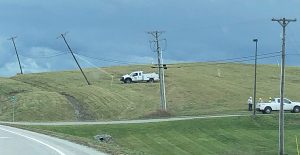 A utility truck with a chain attached to a utility pole holds it in place as strong winds blow through Boyle County Saturday morning on the bypass near Monticello Bank Company building.(Photo submitted by Cindy Ellsworth)

Saturday morning, a large utility pole was pushed over by the winds on the hillside near Monticello Banking Company on the bypass, Wilder said. Because the weather was too severe to immediately repair the lines, a crew with RECC attached a heavy chain to the pole and hooked it up to a work truck to hold it in place until repairs could safely be made, he said.

On Monday morning, the Boyle County Courthouse was without water, but the district and family  courtrooms kept the doors open... read more