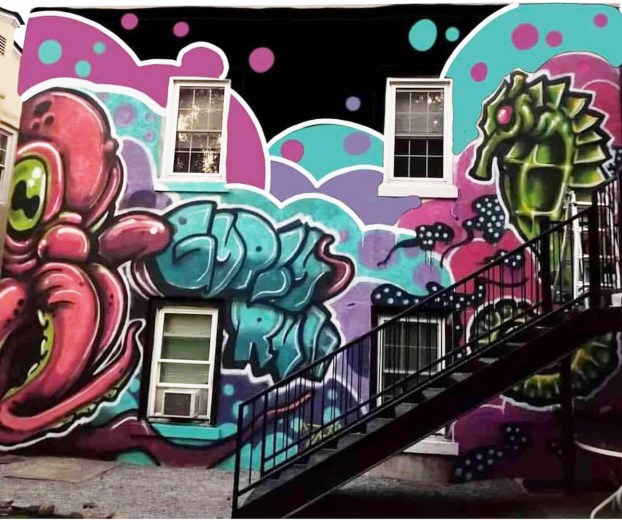 A rendering by artist Trace Goodwin shows what the compelted wall design is out back of Gypsy Run Brewery. Now the business will remove the "Gypsy Run" words so the painting will not be considered a sign. The City of Danville overturned the Architectural Heritage Board's decision to deny the certificate of approval. (Photo courtesy of Morgan Bird)

A new mural in the works in downtown Danville will be allowed to stay.

On Monday night, the Danville City Commission overturned a decision by the Danville Architectural Heritage Board that had denied a certificate of appropriateness for the mural, located on the back of Gypsy Run Brewery on North Fourth Street. 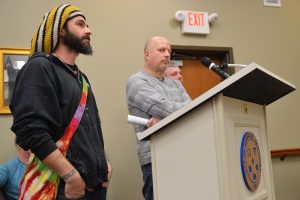 Gypsy Run Brewery owners Morgan Bird, from left, Craig Butler and Brian Reynolds appeal to the Danville City Commission to overturn Danville Architectural Heritage Board’s decision to deny approval of a mural on the back of its building. The city voted 5-0 to overturn the decision. (Bobbie Curd photo)

The property owners — Craig Butler, Morgan Bird and Brian Reynolds — told the AHB in November they had assumed because the wall “could be seen only from their property” that they didn’t need approval. It depicts an aquatic scene, done in a spray-prainted graffiti style on top of painted stucco, with an octopus on one side and the words “Gypsy Run.” More elements are planned for the painting, such as a seahorse, a black background and colored bubbles matching the rest of the art.

According to the meeting minutes, AHB member Mary Girard told the owners a concern was brought forth about the painting being considered public art; the guidelines do not allow logos or promotional wording. Girard also told them even if the “Gypsy Run” wording was removed and regardless of visibility, an approval was still required before installing such a display, because a maintenance plan is necessary, according to the guidelines.

AHB member Julie Wagner said the mural can be seen from Broadway Street, which the building backs up to, and said complaints had been received. She told the owners that guidelines state a mural must “employ a design that is compatible with the district,” and “must engage designs that are unique to Danville and relate to the heritage and character of the community.”

The minutes show a suggestion was made to call the primary image a “thoroughbred seahorse” and to add a Danville Admiral anchor.

AHB member Dana Dixon asked about the assurance that the tall fence surrounding the property would remain. Codes Director Bridgette Lester told the board it was legally required since they expected to serve alcohol in the planned patio area.

During the COA hearing, neighbor William Updike, who owns property at 410 W. Broadway, spoke in opposition of the mural. The minutes state he is a “preservation professional” who works at Shaker Village of Pleasant Hill. 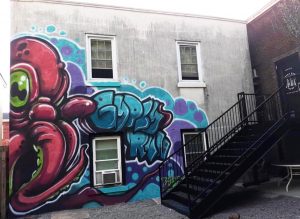 The mural on the back of Gypsy Run Brewery on Fourth Street in Danville is almost complete. Now it will have the words removed, so it will not be considered a sign and instead, public art. (Photo courtesy of Morgan Bird)

Updike said both buildings are included in the Lexington Avenue/Broadway National Historic Neighborhood district, established “for its historic contribution and the integrity of its architecture, which means that projects for consideration in this area are to be held to a higher standard,” such as the principles of design.

Updike recommended the AHB require the wall to be repainted a solid color or “that we work with this group to come up with a design that is appropriate for this historic district.”

AHB member John Bowling spoke up for the business, referencing an apartment building at the corner of Broadway and Fourth streets, saying the “city allows it to be in disrepair and have garbage cans visible.” He asked the board to approve the COA on the basis that the brewery brings needed business activity to the downtown area.

The BOA ultimately voted against allowing the mural.

Monday night, Dexter told the commission it can use the testimony established in the AHB minutes in order to make a decision, noting there was a “healthy discussion” documented in the record.

He said section B of the design guidelines are what the AHB based its decision on. They include requirements that property owners:

Designs that relate to the heritage and character of the community are encouraged by the guidelines.

Bird, one of the owners, said the significance of the art isn’t a recurring theme of the business, but that he and the other owners feel it’s important to bring in a lot of culture and different perspectives, “which we want to share with our community.” The theme and art was created by Trace Goodwin, a tattoo artist out of Harrodsburg who grew up in Crab Orchard, he said.

Bird also said that members of the AHB “were unable or unwilling to define what the ‘fabric of the district’ was. 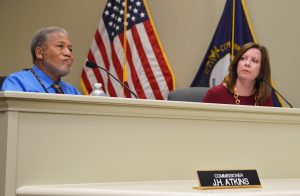 Commissioner Denise Terry asked if the building was considered a “contributing building” since it’s not a historical building, but is within the district. Dexter said he didn’t think the guidelines defined what Terry was describing.

“The board (AHB) would argue if you are within the historic overlay district, it contributes to the historic fabric,” he said.

“Is there a definition of ‘fabric of the district?’” Terry asked.

Dexter said, “No. It would be considered wholly subjective.”

Butler said at one point during the AHB meeting, members began giving the owners “suggestions of what they wanted to see from their personal standpoint on our mural. We didn’t feel it was their place to determine what our art was going to be.”

Commissioners J.H. Atkins and Kevin Caudill said they walked the neighborhood to get a feel for the mural’s impact.

“I had to slow down to a crawl to find it … I personally didn’t see it as particularly intrusive …” Caudill said.

Atkins said, “I try not to judge the content of the character of these things …” but that he could see the mural from two houses. “But it’s not visible from the street if anyone’s walking by.”

Commissioner Rick Serres made the motion to overturn the denial of the COA, based on the guidelines that state murals should not be located on the primary facade, and that the art doesn’t impair the building or obscure the defining features; he added that the wording would be removed, as well. Caudill seconded it.

Atkins said if he was the owner of one of the two houses the mural could be seen from, “I understand why they’d have some issues with it.” He told Bird, Butler and Reynolds that they should have conversations with those two neighbors to help resolve any issues.

Bird said he would “discuss as much of an alternative as we can to make our community happy. We didn’t open a business to step on toes.”

‘We’ve been here before’

He said he would like to resolve disputes about public art without the city commission having to get involved, “but seems like that’s not going to happen.”

Terry also pointed out that this wasn’t the first time an AHB decision about public art had been appealed to the city commission.

“We’ve been here before, so that tells me that something is wrong,” she said. “… Whether it’s the guidelines are too vague or too specific — so to me, that’s what we really need to address. We need to make this as user-friendly as possible.”

Caudill said there’s been discussion many times about creating a public art committee to handle issues like this.

“I would venture to tell you, you would end up in the same position, ultimately,” Dexter said. “Art is wholly subjective. And to define it in a manner which is wholly restrictive and see whether you check boxes or not, is in and of itself potentially censorship and a restraint on speech.”

He said while the city commission may not enjoy having these cases come before them, “to me, from a philosophical standpoint, it’s precisely where it should be — upon the shoulders of those elected who define what the fabric of this district is.”

“But every time — is a mural going to get denied every time? And if it does, we’re going to be here, every time. And so, I’m trying to remove a layer to make it easier for everyone,” Terry said.

She said the whole process was beginning to remind her of the movie “Groundhog Day,” to which Dexter said, “Factually, murals have been approved in this community by the Architectural Heritage Board … some have not, but there have been some approved.”

Later in the meeting, Terry said her comments about the AHB weren’t meant to undermine the work of that board or its volunteers.

“I appreciate all the work …and hours everyone puts in. They are our eyes and ears, and we appreciate that … but I believe there is a problem with the process … not the people who are there,” she said.

Terry said she feels the process itself “puts us in an impossible position” every time the commission must hear an appeal. “That’s what I was trying to convey.”

Next Danville Schools budget could include $1M in cuts