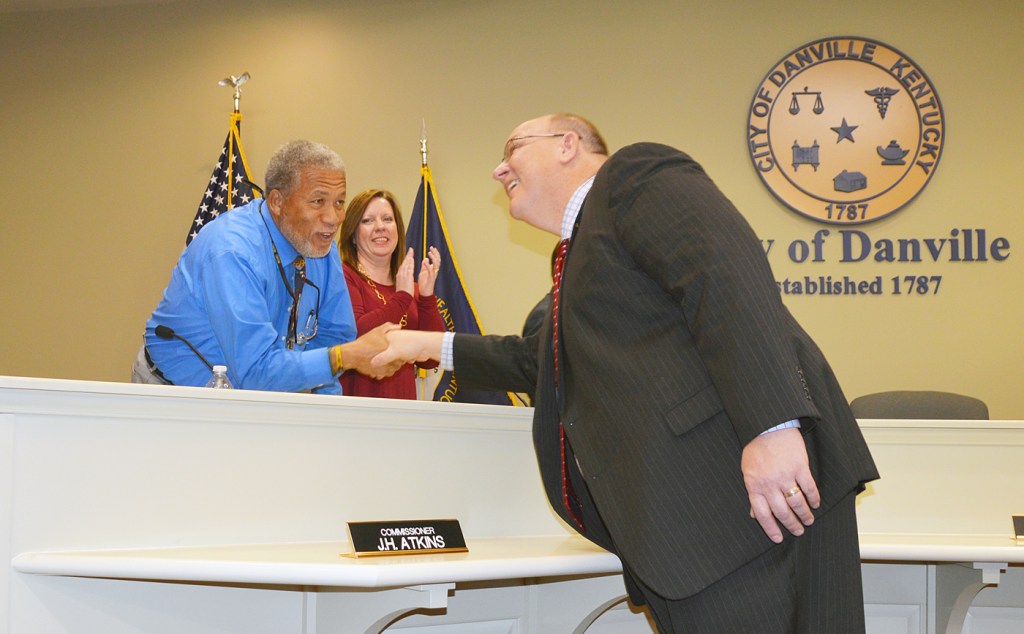 After swearing to support the Constitution, and that he has never fought a duel with deadly weapons in Kentucky, David A. Milliron officially became Danville’s newest city manager.

Milliron said his wife, Barb, will be joining him once they find a new home here in Danville. 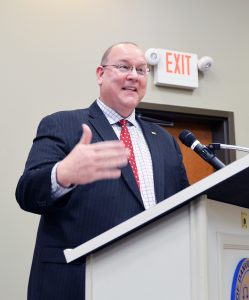 “This is a beautiful community. You should be proud of what you have,” he said. “When you come into Danville, you recognize the history immediately, and that’s something to be excited about.”

Milliron said the retiring Scott has “managed this city faithfully,” and is continuing to help him transition him into his new role. Scott agreed to stay on through the end of January as interim human resources director; the city is working on hiring a replacement for Donna Peek, who also retired.

Milliron said he’s been getting a lot of questions from members of the public who want to get to know him. He’s married with no children — though “we do have two lovely Clumber spaniels.”

“My wife thinks that I love them more than I love her — that’s not true,” he said. “She just doesn’t jump up and down and lick my face when I get home every night. There’s a difference.”

He said he’s also asked about his housing situation. “No, we have not found our new home yet.”

Milliron, who was the city manager for Hogansville, Georgia, about an hour southwest of Atlanta, said, “The folks in this community have been so welcoming.”

He said some things he’s experienced so far just don’t happen in Atlanta.

“For instance, I’m backing out of the driveway and I stop, and three more cars stop behind me and they’re waving, ‘come on out!’ and I’m like, ‘OK, they’re about to rush me … or come around me and take off my rearview mirror.’”

Milliron commented on the hospitality of the community, how “folks stop and wave, say hello, look you in the eye. That is what my wife and I fell in love with about Danville. And so I look to having a very lengthy, long relationship with you all. I tell the community Godspeed, it’s going to be a lot of fun together. You’ll understand what I mean about my social media presence, just stand by.”

In a story published by the LaGrange Daily News, which covers the region of Georgia Milliron previously worked in, Mayor Bill Stankiewicz was quoted as saying, “He has added a professionalism and modern communication approach to governance that was unique.”

After a special called meeting on Dec. 13, when Danville announced Milliron as the chosen as the next city manager, Perros said all three were good choices. But, he added that Milliron’s “presence” is what stood out among the others. “He has a wonderful presence,” Perros previously said.

According to the LaGrange Daily News, Milliron earned his master’s of public administration from Valdosta State University and holds economic developer and municipal finance certifications.