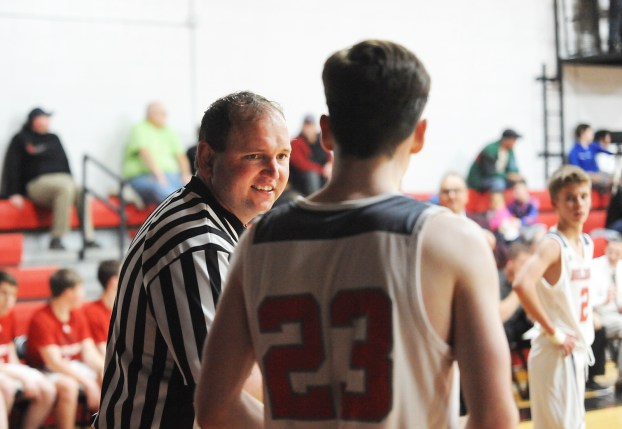 Dustin Kelly said that on every team there are always players who are trying to butter up the officials in hopes a call might go their way. (Photo Derek Brightwell)

One Day: Local ref has called the shots for 10 years, no matter what names he’s called

The team in stripes

Being a referee might be one of the most thankless jobs in all of athletics.

No matter how well you do your job, one half of the fans in attendance are going to think you’re a bum and if you have the misfortune of getting a call wrong? Everybody will know it. 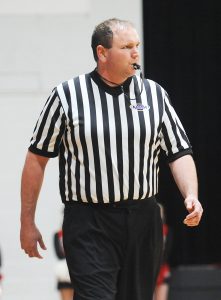 Dustin Kelly has been a high school official for 10 years, and can still remember close calls throughout his career. (Photo Derek Brightwell)

“We say every night that there’s three teams on the floor — the home team, away team and the team in stripes,” local high-school basketball official Dustin Kelly said. “We have to have each other’s backs because nobody else in the gym is going to.”

It’s that brotherhood among refs that has kept Kelly coming back to the hardwood for the last 10 years.

To that end, Kelly says, officials will go beyond just going up to games on their off-days — Kelly himself was taking in the first half of a West Jessamine-Woodford County girls game Monday night — but they will also ask coaches for film so that they can break down their own performances.

It’s not the ones they know they missed that haunt them; it’s the ones they’re not quite sure about, he said.

“If we have a block-charge that we’re not sure about, we’re going to think about it when we get home,” he said. “I had a last-second shot about five years ago — I still don’t know if that shot was good or not.” 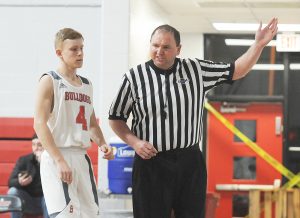 One of the biggest benefits to being an official, says Kelly, is the exercise. He says he can run up to five miles during the course of a game, depending on the pace. (Photo Derek Brightwell)

If you’ve ever been to a sporting event of any kind, you’ll hear as much ire toward the officials as support of the players in the game. That’s something that Kelly says he’s learned to block out for the most part, but does create a problem of recruiting new referees.

“You talk about the stuff yelled at us — it’s hard to recommend someone to be a referee after the stuff you hear on the court three or four nights a week,” he said.

What sort of stuff does he hear?

“If you can think of it, we get called it,” he said laughing. “If we’re getting called (official or referee), then we’re doing something right.”

While some of those names get lobbed at the officials from the coaches, Kelly says that it’s mostly cordial. After all, those coaches are going to want calls later in the game and being friendly with the officials is never bad policy.

Sometimes, the guys in stripes have to fess up to the coaches, which Kelly said can be awkward.

“Sometimes it just takes you admitting you missed a call — they’d rather you do that than come up with an excuse,” he said. “Sometimes you just got to admit you’re wrong — it’s a tough pill to swallow — but if you come up and say, ‘Hey coach, I missed that,’ that’s where a lot of those smiles come from.”

But for Kelly, it all comes down to three things why he still loves calling games — the camaraderie with other referees, the love of the game and exercise.

“I mean, we run probably three and a half miles. A fast paced game — some of those boys games you can go four or five miles,” he said

So the next time you’re taking in a game at a local high school, spare some thoughts for the guys out there calling it, because anything you’d think to yell at them — they’ve heard it and worse before.

Boyle jail will get HIV meds at no cost

The Boyle County Detention Center stands to save as much as $125,000 every year on HIV/AIDS medication costs, thanks to... read more