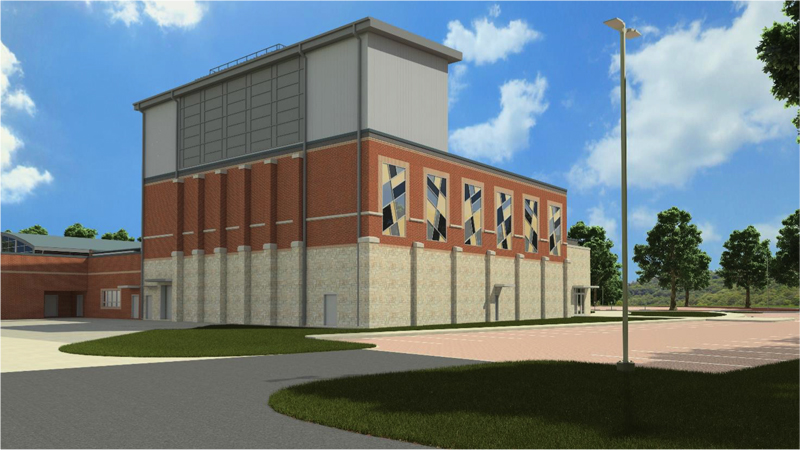 The “Take a Seat” fundraising campaign by the Boyle County Education Foundation, for the benefit of the Boyle County Schools Theatre for the Performing Arts, has been extended until all of the 500 auditorium seats have been sponsored. The fundraiser has been ongoing since February 2019, said Boyle Schools Chief Information Officer Susan Taylor.

“It’s going to be an amazing space” for the students, staff and community, Taylor said.

In fact, the state of the art rehearsal studio, sound systems, stage and the ability to produce visual effects will make the theater capable of featuring Off Broadway productions like “something you’d see at Norton Center for the Arts,” Taylor said. “It’s not just a gym or a big open space.”

The theater will feature multi-level seating, a 50-foot fly loft with professional rigging, an orchestra pit, and performance lighting and audio equipment. There will also be a lobby with a ticket office, green room, rehearsal studio, dressing rooms and a large loading dock.

The project is scheduled to be completed by June or July and a ribbon cutting ceremony should be in August, Taylor said. The theater was originally supposed to be finished by this month, but inclement weather forced the entire project to be delayed, Taylor said.

However, schools are already scheduling the space for their special programs more than a year in advance. Perryville Elementary will have their Christmas program at the theater, Woodlawn Drama Club will have a performance a year from March, a talent show will be in November, and the high school will be having a fundraiser, Taylor said.

But the theater will be more than just a performance space, she explained. “We’re going to have honest to goodness classes.”

There will be a curriculum designed to teach students behind-the-scene skills, such as building sets in the attached scene shop and how to work the sophisticated audio/visual components.

Even though the theater is on the new middle-school campus, it will be accessible to the high-school students. The public will also be welcome to come and see the shows, Taylor said.

But before the stage curtains go up, audience seating needs to be in place, hence the “Take a Seat” fundraising campaign.

For a $250 tax-deductible donation to the campaign, an engraved plaque with the donor’s name, or one in honor or memory of someone, will be affixed to a theater seat in the auditorium.

To make a donation to the “Take a Seat” campaign, visit bceducationfund.com; visit the Boyle County Education Foundation Facebook page; or call (859) 236-6634.

Next Danville Schools budget could include $1M in cuts