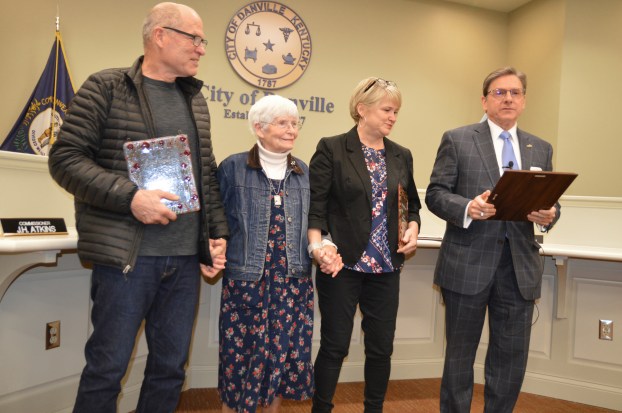 The Henson Family — Robby, from left, Charlotte and Heather — hold hands as Mayor Mike Perros reads each of the proclamations about Robby and Heather being named the 2019 Arts Citizens of the Year by the Arts Commission. (Bobbie Curd photo)

A citizen group in Danville has collected 624 signatures in an effort to spur safety improvements downtown.

Mary Robin Spoonamore — an organizer with the CUPIDD, which stands for Citizens United for Pedestrian-safety in Downtown Danville — said told Danville City Commission members that the signatures were obtained in 10 days.

The group formed with the goal making downtown Danville more “walkable and inviting,” and has been vocal about the lack of lighting on certain Main Street blocks, as well as upgrades needed to certain intersections where pedestrians have been hit by cars.

“We know you’re aware of the problem,” Spoonamore said.

She said the group just wanted to be very clear that there are quite a few citizens who remain concerned about the issue, and they are hoping more changes will be coming from the Department of Transportation.

Later in the meeting, City Engineer John Cassel said the city has been working on the safety concerns. He said the director of Public Works and others have been working on finding a way to adjust a light fixture that had been complained about and get the new lamp on and tested.

“As much as the salesman says it’s an easy fix, reality sets in and we’re having to find some way to have a junction between the fixture and our light poles, and then worrying about the extra things we’ll have to do to be able to safely wire according to code,” Cassel said. “We are working on that and hopefully will have something on that soon.”

Spoonamore thanked the city for beginning some work on the lighting, as the group had proposed in the past.

She said those involved are “heartened and encouraged that you recognize the problem and are working diligently. If there are updates that you know about, we’d like to know about them as well.”

Spoonamore said the citizens who signed the petition are hoping for a safer downtown — “particularly Third and Main. Let’s start there, and work our way through.”

Mayor Mike Perros thanked Spoonamore and CUPIDD for its involvement and collecting the signatures.

“They will be meaningful as we pursue the answer to this long-running problem, going forward,” he said.

The online petition will be left open, Spoonamore said, and the group hopes it can grow the number of signatures to 1,000. The petition can be signed at change.org, and is named “Take out the ‘Yield to Pedestrian’ Element @3rd/Main in Downtown Danville, KY.” Spoonamore said it can be found by searching Danville, Kentucky.

“Interestingly, most petitions I saw on change.org were to departments of transportations, all over the nation,” Spoonamore said. “And about intersections, so we’re not alone as we confront these issues.”

The link to the petition can also be found on the CUPIDD Facebook page. 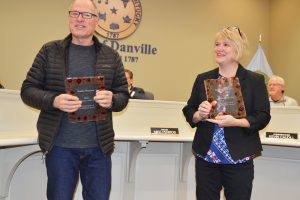 Robby and Heather Henson, siblings who run Pioneer Playhouse with their mother, Charlotte, accepted the 2019 Arts Citizen of the Year award at Monday’s commission meeting. Mimi Becker, director of the Arts Commission of Danville/Boyle County, said the proclamations from the city “shows you recognize the importance of the arts, and what it means to citizens.”

The Hensons received a standing ovation from the crowd. Robby Henson said it takes a lot of people to run the theater.

“It takes a community to make a theater thrive and prosper,” he said.

He thanked the public for supporting them and being a part of it.

“We couldn’t be here without you all supporting what our dad started 71 years ago, and what our mother, Charlotte, has continued,” Heather Henson said. “Come out to the playhouse this summer and keep it going with us.”

“The arts matter,” Robby Henson said, during the last round of applause.

Later in the meeting, Commissioner J.H. Atkins said he recalls his first trip to the Pioneer Playhouse. He said the year was 1967, and in July, he had a three-piece suit on, starched shirt and a tie.

“I’ve been coming ever since then,” Atkins said.

Ron Scott, outgoing city manager, said Monica Sumner with Brandstetter Carroll announced the improved design for the Weisiger Park fountain has been completed. He said it should be presented to the commission during the Jan. 27 meeting. The fountain is being redesigned by the firm due to its underwhelming performance.

“And not to steal Monica’s thunder … she recognized given the long period of time making these engineering improvements that the only thing that would really be acceptable to the city commission was a design that would blow your hair back.”

The city manager’s report also included that Bravura, the firm chosen for the new central fire station design, is close to completing its process. The final design process should be completed and ready to present by next commission meeting, or possibly the first one in February.

Scott said the management staff will meet on Jan. 27 with the bond underwriting agency (Standard & Poors) to go over the city’s stability of revenue and management practices. He said the city has been able to improve its rating, which facilitates better pricing in the purchase of bonds and lower interest rates.

“We will be in the process in February of issuing $10 million to do several projects, including the construction of the new fire department, as well as making the required and necessary improvements to our sewer treatment plant,” he said.

Scott also announced that Bluegrass Community Action Partnership will hold a meeting at 3:30 p.m. Jan. 23 at the Boyle County Public Library in reference to its transit system. Scott said the purpose is to receive citizens’ and officials’ input about desires for improvements to the local transit system.

“My time is coming to an end. The city manager will be swearing in,” Scott said, referring to David Milliron. He and Milliron, Scott said, had been working together all day, including interviewing candidates for the human resources director position.

“I’m impressed with David’s ability … I commend you on that choice … “ He thanked the commissioners and the public for allowing him to serve in his capacity over the past nine years, and said he is looking forward to retirement.

“Unless you call me back for some reason I don’t anticipate, this will be my last report to you,” Scott said. He was given an ovation by the commission and crowd.