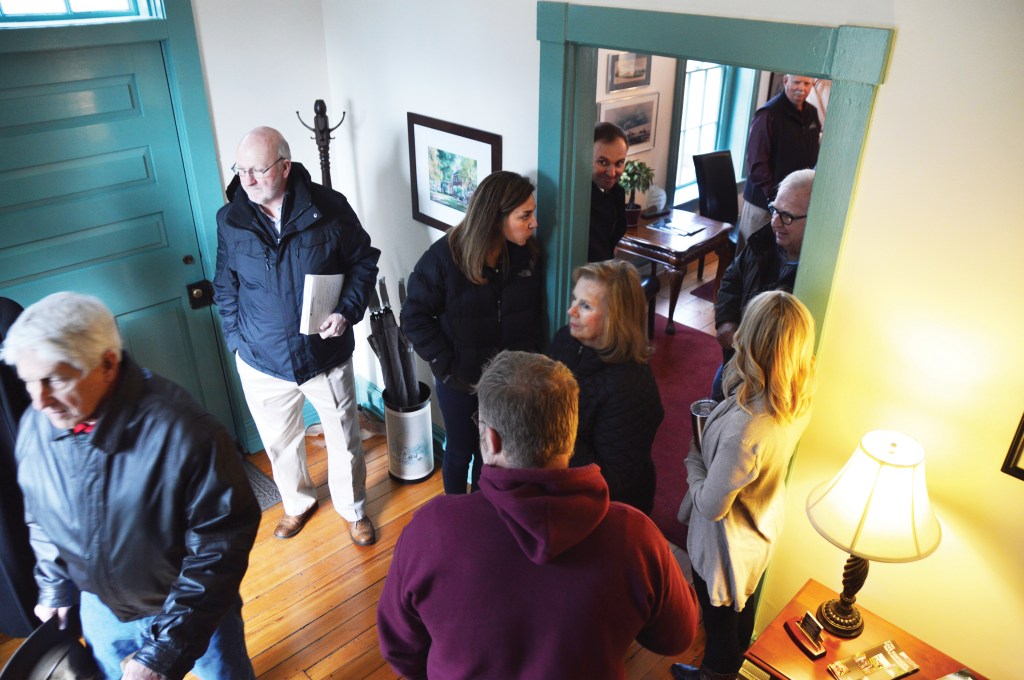 Boyle County Fiscal Court members and others from the community join a tour given Thursday morning for the court to see first-hand what the shape of the buildings and grounds are in at Constitution Square Park. Here, they look through the Watts-Bell House, which houses the Economic Development Partnership offices. (Bobbie Curd)

Members of Boyle County Fiscal Court took a tour Thursday morning of Constitution Square Historic Site. The event culminated back at the courthouse with an hour-and-a-half-long work session, aimed at discussing the memorandum of agreement (MOA) with the leasing parties who work out of the structures on the grounds.

The Economic Development Partnership is the main agency leasing the space. It pays $20,000 annually, which essentially covers all utilities in the park. The Convention and Visitors Bureau is also housed there, as well as the Chamber of Commerce and Heart of Danville; the Arts Commission subleases a space, as well.

Although some came ready with the lease agreement in hand and notes to go with it, the court ultimately decided its first move will be to create a seven-person citizen advisory committee, which will be appointed to create a road map of sorts on how to deal with the aging park, which many say is not being used as well as it could be due to upkeep issues.

Judge-Executive Howard Hunt said he had already been given several names for such a committee, as he’s been playing with the idea for some time. He asked the the court to come prepared for its Jan. 28 meeting with any additional names magistrates would like to add to the list.

The fiscal court is attempting to find some way to bring more revenue in from the park, while leaders of the Economic Development Partnership (EDP) and Convention and Visitors Bureau (CVB) have expressed the need for guidance on who is responsible for doing what with maintenance and events.

Jennifer Kirchner, executive director of the CVB, said managing the park has been pulling her agency away from its core mission; she said the park is a historic gem that needs much love and dedication, and there are many places throughout that are beginning to show wear and tear. She said it has become less of a tourist attraction once the state sold it to the county and removed much of the contents of many of the buildings.

Kirchner and others present said bringing in someone who has historical knowledge, to create more displays which tie the buildings together cohesively, could do much to bring in more visitors; as of now, there’s simply not that much to see, she said.

The EDP’s president and CEO Jody Lassiter said the brick sidewalks are a perfect example of an issue that needs to be addressed, as well as crumbling brick near the gift shop and stairs behind his building. EDP pays for the electric and water which goes to all the structures, and the agencies housed within are responsible for internal upkeep of their spaces. But, as Lassiter pointed out, the outside grounds are outside the scope of the MOA. But, he and Kirchner both said, many of them kick in to help, or contact Duane Campbell, the county engineer, who was on-hand and taking notes on a list of items that need to be addressed.

The group determined the agencies “lease” anywhere from 12,000-15,000 square feet of office space. Magistrate Jason Cullen suggested the agencies were spread out a bit too much and could work to consolidate what they are housed in, possibly to open up some space where the county could rent to another business that’s appropriate for the park.

“I’m not talking about a burger place,” he said.

Cullen said he is thinking more along the lines of perhaps a doctor’s office. However, the sparse parking available could be an issue, some said.

The fiscal court was also to discuss the possibility of bringing on a park manager at some point, who could take responsibility for the grounds issues as well as overall events. They decided the issue could be discussed by the citizens group when appointed, who will forward recommendations to fiscal court to be approved and enacted.

Kirchner said the CVB board has been “tossing around” the idea of looking into any vacant spaces on Main Street it could move into. “We’re just brainstorming … we’re happy to do grants, partnerships, however you want, but we’re kind of at a standstill and I think we need to be more active” with coming up with solutions in the matter, she said.

They also went over some charts showing some expenditures in the park, which were “attention-getters,” Judge Hunt said.

Lassiter said the MOA has been on a three-year term since the partnership moved in, which began in 2012, and it was re-signed in ‘18.

“The only change made was that the annual rent was $20,000, premised on the payment for the utility costs, so we seem to be right on track,” he said, explaining the EDP has paid around $19,300 in annual fees. “… So it seems as if we’re on track for the purpose of what our rent was structured to be.”

Lassiter said the electric cost the EDP pays for also includes the outside lights in the park, as well as the lights in the cabins (tourist areas), bathrooms and maintenance garage.

“Those are the common areas, the public areas of the park that are on our bill,” he said. The park consists of three Row Houses, the garage and conference center, the Goldsmith House/gift shop, Grayson Tavern, the office building and the log cabins.

“That’s not part of our lease, and I would submit that our buildings are below that …” because the public lights run 24/7, Lassiter said.

Cullen asked about possibly moving to solar lights for some of the outside areas. Campbell said this could be researched, but points were made about how the park is mostly shaded.

Kirchner provided a list to the court of 13 items, each with subheadings, indicating what the CVB has been responsible for, such as functioning as the liaison for the EDP partners to the fiscal court; managing park rentals and events; coordinating field trips and tour groups; opening the cabins daily, April-October; maintaining the grounds overall; and managing clean up days, park safety, fundraising and grants, among others.

She said they have maintained partner collaborations across the community to build support and provide services, such as with the Arts Commission, which rents space, the Garden Club, the State Historic Preservation Office, EDP partners, Boyle Landmark Trust, Danville-Boyle County African American Historical Society, Farmers Market, Bourbon Chase and Heart of Danville events.

Kirchner said events used to generate more income for the park than they do now. She said there was one year when it brought in about $8,000 in rentals; “compared  to this year, where I think we’re probably around …”

That money goes to the park endowment fund.

Magistrate Jamey Gay said he wanted to remind the court that “we are one of the partners of the Economic Development Partnership, so we’re somewhat renting from ourself here in that regard … I do love the fact that this is our welcome mat to the community. We get to introduce people to ourself as the birthplace of Kentucky and build upon that.”

He also said that the court needs to expect to invest some money in the park, due to the significant infrastructure needs. “We can’t just keep putting a band-aid on that and think it will go away. We are now entrusted with being a caretaker … of this treasure … We can’t sit here and let it fall apart in front of us, and that’s going to take some dollars. That’s something we can’t keep dancing around or running from.”

The group decided the beginning point will be to repair the sidewalks, and eventually get to the wood roofs.

Lassiter reminded the court that the Industrial Foundation “is the No. 1 contributer to the endowment, of $50,000, because they saw the value and we want to return that value and have it be maintained long-term.”

Ellis said that the county is basically giving away 12,000-15,000 square feet of “pristine” building space away, with the only money being paid going to pay the utilities. “On behalf of the taxpayer, there should be fiscal commitment in the game from the respective entities that are on the campus.”

Gay once again reminded him that the county is a partner in EDP. “This is the way to support our economic development and our community growth partners that do the heavy lifting for us in that regard. This is our way of supporting that, while they’re still contributing some to it, we would ultimately need to be contributing to them anyway. So if we raise the rent, they may need more on the other end” from the court, he said.

Judge Hunt suggested that the citizens committee to be formed could also be responsible for some type of fundraising where the park is concerned. He said the deadline to submit a name for recommendation is Jan. 27, the day before the next fiscal court meeting.

Teens given lesson on the dangers of distracted driving