Dec. 29 — A girl, Eleanor Christine, to Amanda and Michael Marsh of Danville.

Dec. 30 — A boy, Caleb Daniel, to Josie Danielle and Matthew Steven Corey of Gravel Switch; a boy, Dwayne Andre’ JT, to Luly and Lester Moss of Paint Lick; a boy, Clifton Baker, to Chelsea Elizabeth and Clifton David Watkins of Harrodsburg; a girl, Kynzli Rae, to Amanda and Galen Harris of Liberty.

Jan.1 — A boy, Myles Mason, to Taylor and Manuel Navarrette of Danville.

Jan. 2 — A girl, Amelia Blake, to Taylor and Jacob Baker of Stanford.

Jan. 6 — A boy, Xeomari Osaze, to Alicia Nicole (Bradshaw) and Clayton Jared Baught of Danville; a girl, Emmalin Carter, to Ashley and Jose Rosario of Liberty.

Jan. 8 — A girl, Annalynn Dale, to Shelby Currens and Cody Stumph of Harrodsburg; a girl, Kyn’Lee Nichole, to Keara and Tyon Pearson of Kings Mountain.

Jan. 9 — A boy, Elliott Elijah, to Lauryn Briar and Kurtis Forbes of Danville; a boy, Tommy Mox, to Allison and Tommy Craig of Harrodsburg; a boy, Daniel Americus, to Randalin and Cory Wilson of Liberty.

Jan. 13 — A boy, Maddox Alexander, to Andrea and Matthew West of Perryville.

Jan. 14 — A boy, Julian David, to Pamula and Chad Dalton of Danville; a boy, Jackson Wayne, to Emma Clount and Dalton Toomey of Crab Orchard. 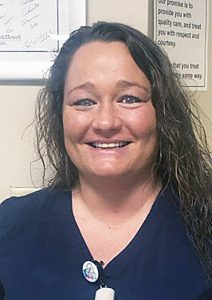 Ephraim McDowell Regional Medical Center (EMRMC) is pleased to recognize and honor one of its nurses for her extraordinary patient care. Jackie Hobbs, RN, a nurse in the Emergency Department at EMRMC, was one of many nurses nominated for the DAISY Award. A resident of Mercer County, Jackie has been caring for patients at EMRMC for six years.

She was nominated by several patients. One of the patient’s family members said, “Around midnight on a Sunday night, I had to take my grandson to the ER. He is developmentally delayed and nonverbal. Even though he was quite sick, he can still be a handful. Jackie was not his nurse at first, but she stepped in and handled him beautifully. She got down on his level and let him participate in any procedures. She was patient and understanding. Even though she had other patients that she was caring for, she never acted rushed with him. I cannot say how much her professionalism and caring meant to me. She impressed me with her nursing skills. She was organized, had everything she needed at bedside and acted swiftly while he was still drowsy. I trusted her at that time and let her accompany him to ultrasound while I got a break. I must say Dr. Carroll and Elena were great with him too. If we ever come back to the ER, I will ask for Jackie to be his nurse. I am thankful we have such a caring nurse in the ER.” 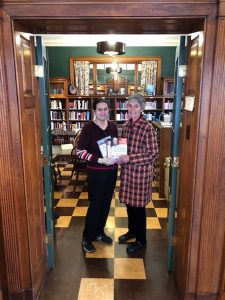 Jamie Helle, left, Danville Boyle County Public Library’s Reference And Acquisitions Librarian received three new books from Alice Biggers, Librarian of St. Asaph Chapter of the Daughters of the American Revolution in memory of the three beloved members who passed away in 2019. The three titles donated this year are: “First Ladies of the Republic”, by Jeanne E. Abrams in memory of Joyce Eulner; “The Mayflower: the Families”, by Rebecca Fraser in memory of Irene Estes; and “Sam Houston and the Alamo Avengers”, by Brian Kilmeade in memory of Henrietta Cannon. St. Asaph‘s donation of books to the public library in memory of their members has been a tradition for over 20 years. (Photo submitted)