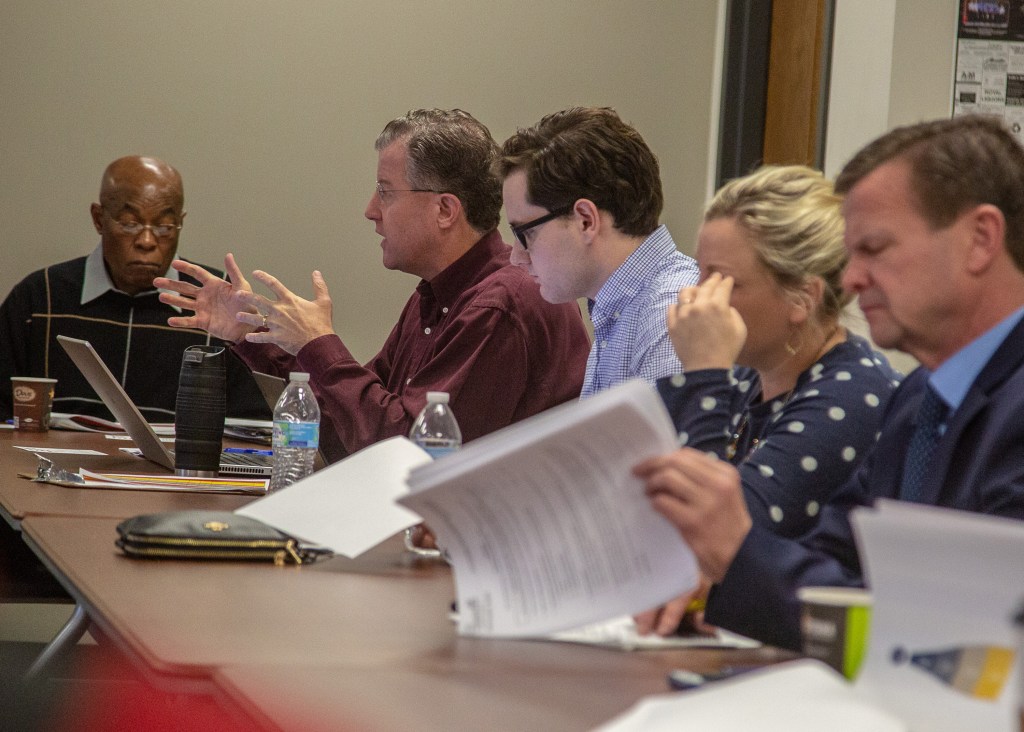 EDP President Jody Lassiter, second from left, provides his executive report to the board of the Economic Development Partnership on Wednesday. (Photo by Ben Kleppinger)

Ninety-two businesses expressed some level of interest in opening or expanding in Boyle County during 2019. Seventeen of them publicly announced plans and 10 of those 17 projects were completed.

That’s according to the final 2019 “project funnel” report from the Danville-Boyle County Economic Development Partnership. The public version of the quarterly report was released this week by EDP President Jody Lassiter. It contains summary information of every project the EDP worked on in 2019, as well as some projects announced previously but completed or still in process in 2019.

The report says Boyle County was “qualified” for 80% of the project inquiries it received, meaning nothing immediately precluded the county from consideration. About 43% of inquiries made it to the “due diligence” phase, when companies are looking for more detailed specifics such as potential locations. And 18% turned into announced projects, with more than half of those announcements being completed, meaning a new business opened or an existing one completed its expansion/renovation/relocation.

Two projects that had been announced but were still in the works on the previous funnel report were completed during the fourth quarter of 2019:

In all, there were 60 commercial inquiries and 32 industrial inquiries in 2019; 72 of the inquiries were about opening new locations, while 18 were about potential expansions. The report lists zero projects involving “retention” — meaning projects completed to prevent layoffs or closure of a business. A total of 39 projects the EDP worked on in 2019 will be carried forward as open projects in 2020.

Lassiter said one of the projects announced in 2019 — an expansion at Meggitt Aircraft Braking Systems that involves an investment of nearly $83 million — made The Lane Report’s list of Kentucky’s largest 2019 new and expanding industries.

Meggitt’s project, which is estimated to create 83 new jobs, ranked ninth on the list, though Lassiter noted the list did not include the $130 million investment distilling giant Diageo is making in neighboring Marion County. Nucor Corp. topped the list with a plan to invest more than $1.35 billion in a steel plate manufacturing mill in Brandenburg, creating 400 jobs.

The 10 projects listed by the report as announced and completed in 2019 are:

The seven projects announced but still in the works are: