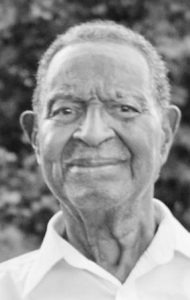 James T. Vandiver, 94, of Crab Orchard, KY, went home to be with his heavenly Father peacefully on January 13, 2020 at the Episcopal Church Home in Louisville, KY. James was born in Crab Orchard, KY, on May 8,1925 to the late Margaret Ann King and Cecil Vandiver, Sr. James was preceded in his death by his wife Madge Boone Vandiver, his father and mother, Cecil Sr. and Margaret, brother William Cecil, Jr., and his sister Vera Irene.

In June of 1943, James was drafted into the Navy and served during World War II on the USS Boxer. James had tours in England, China, Japan, and the South Pacific.

While stationed in Newport News, VA, James met and married Madge Boone on May 15, 1946. From this union came four children that James dedicated his life to providing the best educational opportunities possible. He was very proud that all of his children attained at least a bachelor’s degree, as he was not afforded that opportunity. His children are as follows: Zenolia E. Miller, Louisville, KY, Ronald L. Vandiver, Pflugerville, TX, Beverly J. Vandiver of Portage, MI, and Perline Williams of Warenton, NC. He also leaves to mourn him 4 grandchildren, 6 great-grandchildren, one great-great grandson, and various cousins, nieces, and nephews.

As a lifelong member of the NAACP and follower of Martin L. King’s lead, James was one of the leaders to successfully integrate the Lincoln County, KY schools in the 1960s, with Crab Orchard High School being the first in 1962. Besides farming and his family, he enjoyed coin collecting, growing supersized cannas, and tinkering with his vehicles.

Memorial services will be held at McKnight Funeral Home on Main Street, Crab Orchard, KY on January 20 at 12 noon. Rev. Ralph Smith of St. James AME Church, Danville, KY, will officiate. Visitation will be from 11 a.m.-12 p.m. prior to the memorial service. Interment will be at the Crab Orchard Cemetery.

In lieu of flowers, memorial donations may be sent to the Crab Orchard Cemetery Club at PO Box 134, Crab Orchard, KY, 40419. Tributes may be posted at https://www.mcknightfuneralhome.com