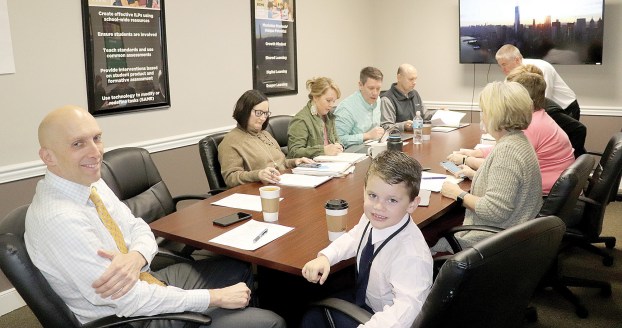 Junction first-grader gets to be ‘superintendent for a day’

Zyler Hughes isn’t totally sure what he wants to be when he grows up, but on Thursday he got to try one job out in advance: school district superintendent.

The Junction City first-grader spent the day with Boyle County Superintendent Mike LaFavers, doing everything that LaFavers did. Hughes and LaFavers visited schools, toured the bus garage, went on a hardhat tour at the new middle school construction site, attended the Teacher of the Year/Classified Employee of the Year Lunch event, processed purchase orders …

“He’s got a real sweet personality,” LaFavers said of Hughes while the two were reviewing the school board meeting agenda in LaFavers office around 3 p.m.

Hughes’ mom was on his way to pick him up after the special day, then Hughes would be back to lead the board meeting with LaFavers that night. 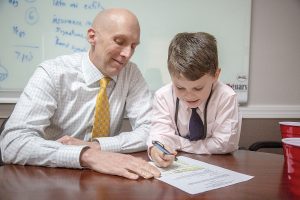 LaFavers asked Hughes if he knew what he wanted to do when he grew up yet.

“I’ve still got a long ways to go before I know,” Hughes answered. “But really, I want to be a video-game maker or work at a video game place like GameStop or something.”

“That could probably be your first job,” LaFavers said with a smile. “Who knows?” 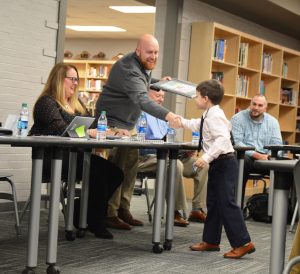 Zyler Hughes shakes hands with Jesse Johnson, vice chair of the Boyle County Board of Education, Thursday night after presenting him and others on the board with framed artwork from students. (Photo by Bobbie Curd)

Thursday night, LaFavers introduced Hughes as the board of education meeting began, and he was seated front and center, next to LaFavers at the board table.

LaFavers said he was told by Hughes’ teacher at Junction City Elementary that, “‘You’re going to enjoy Zyler,’ and she was right.”

He said the two “had a blast” together as Hughes shadowed him for the day.

LaFavers said they began their day by introducing Hughes to all the staff at the central office.

“So many of them said, ‘You look so handsome today, you look so good.’ And he would always say, ‘You look good, too,’” LaFavers said.

He said everyone said Hughes is a “sweet young man, but you can pick up on (that) right off the bat.”

He said he always attempts to find a day that’s not too boring when a student shadows him, because his job can be “a little boring, a little tedious for a first-grader, and for a 52-year-old man, as well,” which brought in laughter from the packed room.

Hughes kicked off his day by attending a meeting with LaFavers about all the construction going on for the new middle school, and the renovation of the former middle school, which will become Woodlawn Elementary.

“So Zyler comes in, it’s 9’o’clock. By 9:15, he looks at me and says, ‘This is really boring,’” LaFavers said, which he kind of knew might happen, so he took Hughes on a tour of the elementary and middle schools. “Which he loved that, by the way.”

LaFavers said during the Teacher and Classified Employee of the Year luncheon, Hughes made a comment about how much he appreciated teachers and all of the staff. Then they went on a hard-hat tour of the new middle school.

The superintendent insinuated it was quite a workout to keep up with the first-grader.

LaFavers said wherever Hughes went, “we just followed him around, and we had a great time.”

He said Hughes came back to the central office with him, where they prepared for the board meeting, signed a few purchase orders …” then it was almost time for his mom to come get him.

“We’re good, we’ve got the board meeting lined out … we’ve done everything, and he said he wanted to have a coloring contest. And then he wants people to judge it.” So the two went around the office asking, “whose is better?”

“You said it had to be five people,” he said to Hughes, who nodded his head and said “Mm hm,” with a huge smile.

“And all five picked him. I couldn’t believe it,” LaFavers said to laughter. “None of them picked me. I mean, I really tried.” Hughes sported a huge grin throughout the telling of the story. 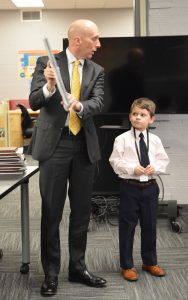 Boyle County Schools Superintendent explains the framed art he and Zyler Hughes, right, will pass out to board of education members. (Photo by Bobbie Curd)

Hughes hand-delivered the art pieces to each member and shook their hands.

He also posed for pictures with Teachers and Classified Employees of the Year, also shaking each employees’ hand.

When the clock was nearing 8 p.m., LaFavers asked Hughes’ family if they’d like to stay for the rest of the meeting, but they decided to go — it was nearing his bedtime, and he had school in the morning.