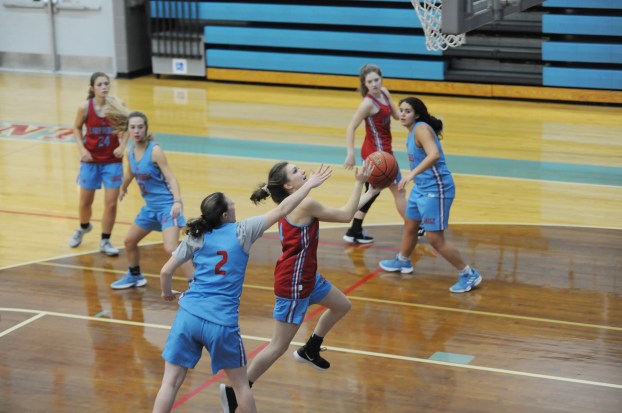 Casey County senior Jordy Stephens (in red) goes up for a layup against Lauren Lee (2) in a preseason practice. The relationship with the other seven seniors on the team is Stephens' favorite thing about her final high school season. (Photo Derek Brightwell)

Casey County’s girls basketball team had three seniors who had scored over 1,000 points in their career entering 2020. A week into the new year, Jordy Stephens got over the hump to become the fourth.

“I had known a week in advance. It was obviously kind of tough because you knew you had to hit shots. It kind of put pressure on me,” she said about the build up to 1,000. “Once I did hit it, it was a really good environment.

“The one where I made it — it was a fast break, a one-on-one situation and ended up being an and-1. So that was pretty crazy. Before that, I wasn’t hitting anything on the outside but eventually it came to me.”

Stephens is one of seven seniors on the Lady Rebels. It’s a group that has been through a lot — including two runners up finishes in the regional tournament — and has only grown closer through the years.

“It’s been really good. I’ve played with these girls for a really long time now,” she said about the group. “It’s been super special just because we are so close knit. We’ve been able to share every single moment with each other. I’m not looking forward to senior night because it’ll be a very emotional night.” 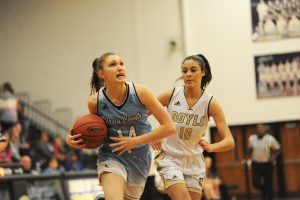 Despite — or perhaps because of — all of the accomplishments that Stephens and this Casey County team has accomplished, she struggled to come up with her proudest achievement on the hardwood.

The easy answer could come this year if the Rebels are able to get out of the regional tournament and play at Rupp Arena for a chance at a state title. Those two losses are something that Stephens says has been in their minds ever since they lost to Southwestern last year.

“It definitely motivated us,” she said matter of factly. “In the season, when we played Southwestern — which is who we lost to — we want to beat them so bad because we are still angry about (last year). When we come out, we’ll be very motivated.”

In the only regular season meeting with the Warriors this season, Casey was able to get a small amount of revenge in the form of a 48-42 victory.

The combination of the bond with her fellow seniors, and the last two years of coming up just short is what makes Stephens’ final season such a special one for her.

“My favorite part would be just being together for as long as we have,” she said. “We have a really good chance of getting past region and going to state. That’s probably the most exciting thing this year.”

When I talked with Casey coach Tara Weddle before the season started, she highlighted Stephens as perhaps the fastest player in the 12th Region. Despite that, the senior said that there has been no attempt made by coach Jon Vaughn to get her to come out for track.

Stephens said that the only attempt made by any of the Casey coaches to turn her into a two-sport athlete was by former softball coach Ashley Dean who offered her a pretty sweet deal.

“We were having a field day last year and were playing baseball,” she said. “The softball coach was out there watching me and came up to me — I wouldn’t have even had to go to practice, just run the bases during games. I ended up not. I don’t know why.”

Stephens said that she used to play softball and that it was “basically my life” before she went full time to basketball, saying that her love of the game kind of faded off.

But not with basketball.

“I’ve been playing ever since the second grade. I just love the game,” she said. “I really do enjoy practice — with softball it used to be like that but fell off but with basketball it just stuck with me. It’s something I’ve always liked.” 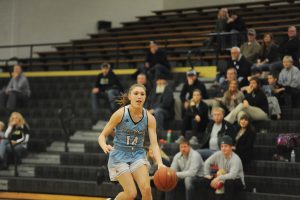 Basketball has been a part of Stephens’ life since the second grade and while other sports have faded for her, she still loves basketball. (Photo Derek Brightwell)

Coach Weddle, on a couple of occasions, has affectionately referred to her team as “the most awkward team in the state” — saying that when they walked into opposing gyms, nobody would guess that they are as successful as they have been.

Stephens agreed with that assessment, acknowledging that things like doing interviews is definitely “not our strong suit at all.”

Still, as they continue to find success on the court, it’s a skill that they may need to develop.