Question: Dear Jerry, I was going through some of my late father’s books and I found this. A little paperback that’s titled “About Some of the Heads.” It was written by Horace Caldwell Head in Santa Ana, California, in 1942. It’s in excellent condition and is signed by the author. I thought the title was funny. Any value or just toss it? I await your answer. 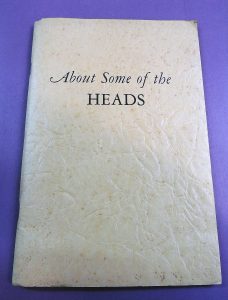 Answer: Well, I encountered this title from a local estate some years ago. I was excited and thrilled to see it. Until I read it.

First things first. You have a copy of “About Some of the Heads” by Horace Caldwell Head. It’s a small book, bound in wraps, as we say in the trade. It’s a vanity printing, meaning that Mr. Head didn’t use a publisher — he just paid to have his genealogy printed and bound to sell or give to family members. It is from 1942, and it’s highly likely that there was only one printing. It is very, very rare. Remember, rare doesn’t always mean valuable.

When I first saw this book, I just knew that it would have pages of the genealogy of Rev. Jesse Head. Rev. Head was the man who married Abraham Lincoln’s parents, was a successful business owner and a furniture maker in Harrodsburg. Incidentally, only a few examples of his signed furniture are known.

Guess how much information there was on the good reverend? Zip. Nothing. I was disappointed.

However, it does briefly touch on the Caldwells of Kentucky. Caldwell is an old Boyle County name and can be found in Eastern Kentucky too. But even that is slim. It mainly focuses on England, Virginia, Tennessee and lots and lots on California. It is a vanity printing and I guess he was being vain over his own California lines.

The book is rare though. So rare, that I couldn’t find it on any of my usual books sites or even Amazon. I found no listings for it then or find no listings now.

Sometimes, things can be so rare that no one wants them. This is a very serious study for the California Head family and would appeal to those family members or a genealogy library. Still, I’d suspect that it would be priced for about $50 in a retail bookstore — more if it was a Head scholar or a very upscale venue. The author’s signature is a nice touch, but I don’t think it adds much this time. Thanks for a great question.

Tips for dealing with cold weather when you travel