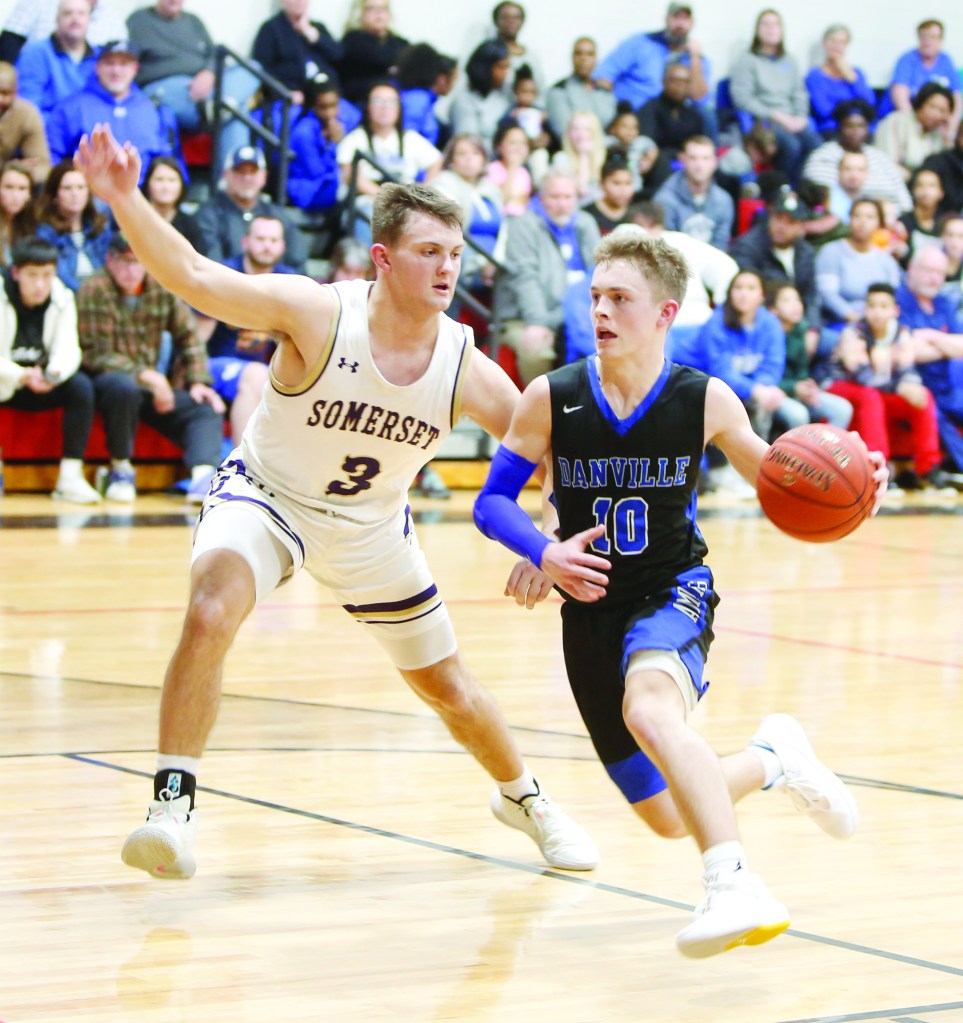 Aden Slone (10) of Danville drives toward the basket against Somerset’s Kade Grundy during the fourth quarter of Somerset’s 72-70 victory in the boys 12th Region All “A” Classic championship on Friday. (Photo Mike Marsee)

BURGIN — It took only a couple of minutes for the Danville boys to lose their grip on the 12th Region All “A” Classic, and they were never quite able to get it back.

The Admirals saw a nine-point lead melt to two points in just over two minutes late in the third quarter Friday night, saw Somerset seize control of the game early in the fourth quarter and saw their bid to repeat as champions disappear in a 72-70 loss in double overtime.

Somerset hit just enough free throws – three of six attempts – in the final minute of the second overtime period to hold off Danville in a hotly contested game before an overflow crowd at Jack Coleman Sr. Gymnasium.

Danville (14-5) never led in the second overtime, but the Admirals were within 71-70 after Dante Hayden hit one of two free throws with six seconds remaining. They got a chance to tie or win the game after Kade Grundy hit one of two for Somerset (16-2) at :05, but Aden Slone’s contested 3-point attempt missed the mark at the buzzer.

The Admirals led 26-16 midway through the second quarter and 40-31 with 2:38 left in the third, but the Briar Jumpers scored six straight points and nine of 11 to pull within 42-40 with 55 seconds left in the period.

Danville led 64-63 after a layup by Trey Dawson with 1:49 left in the first overtime but couldn’t get another field goal and missed three of four free throws in the period, and a layup by Somerset’s Jase Bruner with 11 seconds left forced a second overtime.

Hayden hit two layups in the final period to answer Somerset baskets, but the Admirals missed three chances to take the lead.

Dawson scored 13 points and Hayden added 10 for the Admirals. Darrian Bell had 12 rebounds.

Grundy scored 20 points and Gavin Stevens added 18 for Somerset, which returns to the statewide All “A” Classic for the second time in three years.

Lady Ads advance to All A Classic for eighth…