Rep. Daniel Elliott talked primarily about the 2020 Kentucky Legislative Session at last week’s Danville Rotary meeting. He characterized it as a very pressing issue for all of us. He intends to work with Gov. Andy Beshear but will continue to push projects, a pro-jobs, pro-life, and conservative policy. 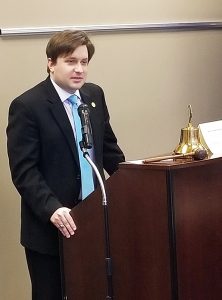 “I love to come out and see people in the district, because I get to hear what your priorities are. The first question I want to ask all of you is: Which of the following issues do you feel should be the top priority for legislators in the session: Healthcare, jobs and the economy, K12, public education, roads and bridges, post-secondary education, preschool and early child or other?”

Elliott believes in limited government. About 43% of the last budget went to education, 16.8% went to Medicaid, 14% to pensions and 12% to criminal justice. That is 85.5% of the budget just in those four areas.

“Pensions are critically important and we are going to have to continue to fully fund those because we have made that promise to our citizens. But the reality of the situation is that it’s going to take up 14 to 15 percent of our budget that we cannot put into other areas.”

The Senate has provided their priorities: Voter I.D. and immigration. The Senate has identified those policies as important. The House is still debating priorities amongst themselves. Elliott feels It is of great importance that our school districts are able to put school resource officers in the class.

Elliott’s response: I don’t think it’s likely that that will be part of the equation this year. I think it is important to determine whether to move our income tax system to more of a consumption based system, as Indiana and Tennessee have done.

Elliott’s response: I have been asked whether or not I would support having a local sales tax for specific local projects. I think that probably goes to part of what you are talking about, because I think sometimes in Frankfort we are not as cognizant of local government issues as we should be. We do pass a lot of mandates and requirements, and are not always cognizant of the effects on local governments. We are working on a bill right now to increase Medicaid payments to our ambulance services in Kentucky. In the preliminary numbers that I’ve seen for Boyle County, it would be quite an increase.

Elliott’s Response: Currently the sales tax is at 6 percent, would you be in favor of raising that in order to lower the income tax rate? That has been successful in creating growth in Nashville and it is doing much better than Louisville. I think there are merits to moving toward a consumption-based tax system with the exception of groceries and medicine.

Elliott’s Response: I do not know if we could eliminate it, but I think we could get to a lower personal income tax rate than we have currently.