Friends of the Library opens spring series with Chautauqua presentation 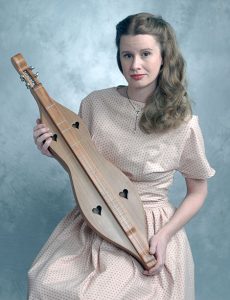 The Friends of the Library (FOTL) will kick off their 2020 Program Series at their annual meeting and tea 5 p.m. Thursday, Jan. 23 in the Community Room at the Boyle County Public Library. The program will include the Kentucky Chautauqua presentation of Jean Ritchie — “Damsel with a Dulcimer,” performed by Rachel Lee Rogers.

The performance, which is an exclusive presentation of Kentucky Humanities, will be preceded by the FOTL annual meeting. This event is free and open to the public. An interpreter for the deaf is available upon request by contacting the library 48-hours in advance at (859) 238-7323.

Rogers will bring history to life in her Kentucky Chautauqua portrayal of Jean Ritchie —a traditional musician, songwriter, poet, commercial performer, recording artist, author and composer. Born in Viper, Perry County, Kentucky, in 1922, Ritchie was the youngest of Balis and Abigail Ritchie’s 14 children. Singing was a way of life for her family and neighbors. Ritchie carried the songs she learned as a child with her to the University of Kentucky, to England and Ireland where she studied on a Fulbright scholarship and to New York City where she lived much of her adult life. Though she lived in New York, she always remained tied to her Kentucky roots.

Ritchie began her recording career in 1952, signing with Elektra Records. Throughout her career, she recorded more than 35 albums, which strongly reflected her Kentucky heritage and featured her playing the mountain dulcimer. Known as the “Mother of Folk,” she was a major contributor to the national revival of folk music across America during the mid to second half of the 20th century.

Rogers of Versailles portrays the young Ritchie. Trained at Northern Kentucky University, Rutgers University and the London Academy of Music and Dramatic Arts, Rogers is a local educator and arts facilitator at the School for the Creative and Performing Arts at Bluegrass, in Lexington.