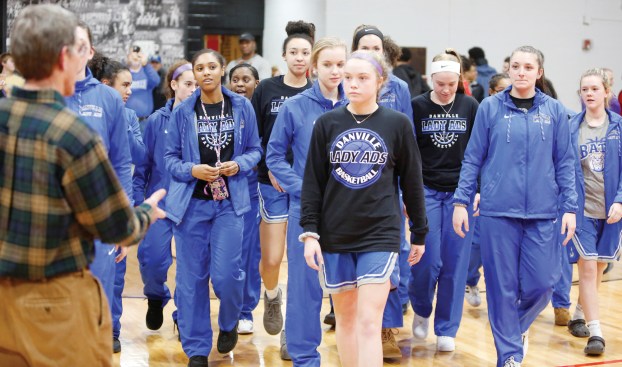 Lady Ads advance to All A Classic for eighth straight year

BURGIN — The Danville girls are moving on to the All “A” Classic once again, and Judie Mason wants to make sure they stay a little longer this year.

That’s why the Lady Admirals’ coach had some sharp criticism for her players Friday night following their 46-37 victory over Somerset in the championship of the girls 12th Region All “A” Classic at Jack Coleman Sr. Gymnasium.

Danville had done enough to punch its ticket to Richmond and the statewide small-school tournament for the eighth consecutive season, but Mason said the bar is higher than that, and that’s why a sloppy second half didn’t sit well with her.

“That was ugly, and you’d have thought we lost when we went into the locker room after the game,” Mason said. “We’ve won it eight years in a row, we’re supposed to win the region. I don’t like just winning the region, my goal is to win the state.”

Danville (12-5), which lost to Murray in the first round of the state All “A” last year, will try to extend its stay next week when it plays 7th Region champion Louisville Collegiate (9-3) in a first-round game at 1 p.m. Wednesday at Eastern Kentucky University’s McBrayer Arena.

“Last year we played the best team in it, I thought,” Mason said. “I’m not going over there (this year) to play one game, and that’s why I was so hard on them tonight. I’m going to be very disappointed if we do.”

The Lady Admirals added to their string of All “A” regional titles by opening a double-digit lead in the first half and holding off Somerset (8-11) in the second half despite getting only one field goal in the final 14:10 of the game and none in the final 9:57.

“It was just pushing and fighting and hopefully rebounding and scoring enough to be in front of them at the end,” Danville forward Jenna Akers said.

Rebounding remained a constant for Danville even as other parts of its game came and went. The Lady Admirals outrebounded the Lady Jumpers 18-11 in the first half, when they had 16 more field goal attempts, and 38-31 overall with 15 offensive rebounds.

“In practice every day we do a putback rebounding drill, and it helps us every day in practice,” said Jenna Akers, who had four offensive boards and a game-high 15 rebounds overall.

Mason said Akers’ rebounds were critical on a night when the team’s top two rebounders, Camryn Preston and Desiree Tandy, spent considerable time on the bench.

“I thought Jenna really rebounded the ball well tonight, and with Cam hurting and Desiree on the bench with foul trouble, Jenna’s got to rebound that ball,” Mason said.

Lara Akers and Ahyana Burnett scored 10 points each to lead Danville, which scored all but six of its 22 second-half points at the free throw line. Burnett went 8 for 10 at the stripe in the fourth quarter, and Tyliah Bradshaw was 5 for 6 in the final period.

The Lady Admirals scored the last 10 points of the first half to lead 24-11 at halftime. Somerset scored six straight points to pull within 28-21 three minutes into the third quarter, and while the Lady Jumpers never got closer down the stretch, Danville was never able to pull away.

“I think we got relaxed, and we quit doing the things we were supposed to do,” Mason said.

The Lady Admirals were 3 for 14 from the field in the third quarter and 0 for 8 in the fourth.

Danville hasn’t won a game at the All “A” state tourney since 2014, when it was the runner-up. Jenna Akers said the Lady Admirals want to change that next week.

“We just have to learn to play as a team and we can hopefully go on to the next round,” she said.

Patriots have no problems with Rebels