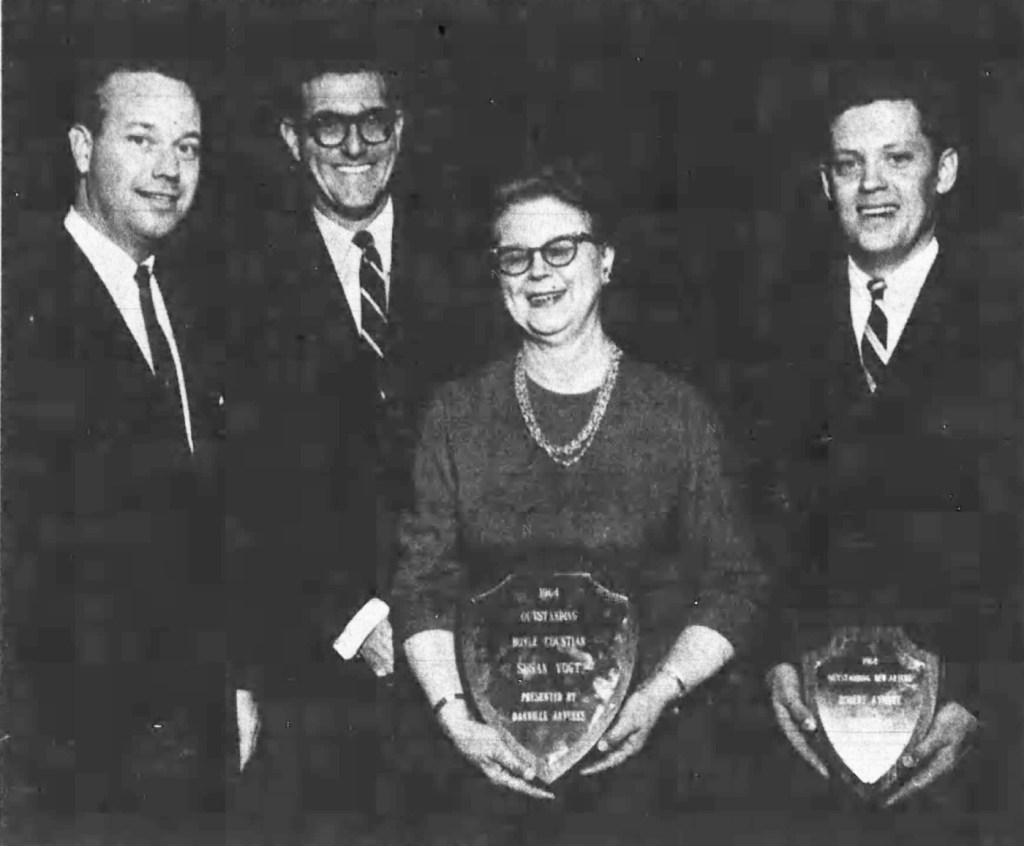 Winners of the two highest honors awarded annually by the Danville Junior Chamber of Commerce that were presented during the 11th annual banquet were Miss Susan Vogt, and Bob Ayotte, at right. Vogt was named as the Outstanding Boyle Countian of 1964 and Ayotte was named Outstanding New Jaycee. At left were guest speaker at the event, Rep. Ken Harper of Covington, local Jaycee President Bill Davis. (Photo from Advocate-Messenger archieves)

In 1965, Danville had an active Junior Chamber of Commerce, known as Jaycees, in addition to the Danville-Boyle County Chamber.

On this day in 1965, the Jaycees’ 11th annual awards banquet was featured on the front page of The Advocate-Messenger. The dinner and awards ceremony took place at the Boyle County High School cafeteria.

The Outstanding Boyle Countian of 1964 was awarded to Susan Vogt. She was an employee of Western Kentucky Gas Company, chair of the local Community Development Committee and a member of the Danville Business and Professional Women’s Club.

Vogt was “praised for her outstanding service” for the organizations in which she volunteered; for a Community Development project she helped with, preparing Danville’s scrapbook for the State Chamber’s contests, in which the scrapbook won top honors; and for her leadership on many local drives, such as the March of Dimes, Heart Fund, United Community Fund, Cancer Crusade and others.

The Outstanding New Jaycee Award was given to Bob Ayotte. He had been a member of the Junior Chamber since the previous year, when he moved here as an employee of Corning Glass Works. Ayotte was recognized for “his willingness to work, his leadership ability, his service as editor of the Jaycee Newsletter, and his duties as the incumbent club secretary.”

In other front page news:

The burglary was discovered by Danville police, who had been making their regular rounds behind the shops about 12:30 in the morning.

According to the article, the thieves, apparently professionals, backed a vehicle up to the rear door of the store, forced the doors open and stripped three racks of garments from the middle section of the store.

Baer said the biggest loss was about 80 suits and topcoats, along with jackets, sports shirts and shoes.