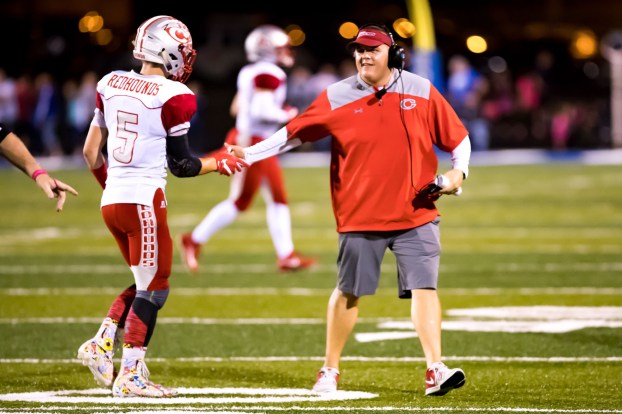 Justin Haddix led Corbin to consecutive state finals appearances, including a win over Boyle in 2018 semifinals and a loss to the Rebels in the 2017 finals. (Photo by Les Nicholson/The Times-Tribune)

After the state championship, Boyle County knew that it was going to have to replace a large and accomplished senior class that sent three players to Division-I schools on scholarship, and included the school’s all-time leading passer. It was a few weeks later that they learned they’d need to replace legendary coach Chuck Smith.

On Sunday, they announced they had found their man, and it’s a face the Rebels have seen before.

Justin Haddix agreed to the job, leaving behind a Corbin team that dealt Boyle a heartbreaking loss in 2018 that manifested the “Finish the Mission” mantra the team carried through the 2019 season.

The year before that, it was in the state championship that Haddix’s Redhounds ran into Boyle County — and the Rebels getting the better of that meeting.

Haddix is familiar with success. He lead Corbin to 11 wins or more in four of his six seasons on the sidelines, including consecutive 13-2 years with state runner up finishes. But that’s not the only aspect of Boyle County football that the new coach is used to.

In Haddix’s first three years with Corbin, the Redhounds were Danville’s opponent the week after the Title Town Showdown. In those three games, Haddix was 2-1.

Haddix also had to adjust to stepping up a classification in 2019 when Corbin — like Boyle — made the jump from 3A to 4A. In the Redhounds’ first season in 4A, they went 6-5 and came up short to Wayne County in the second round of the playoffs.

BURGIN — It took only a couple of minutes for the Danville boys to lose their grip on the 12th... read more